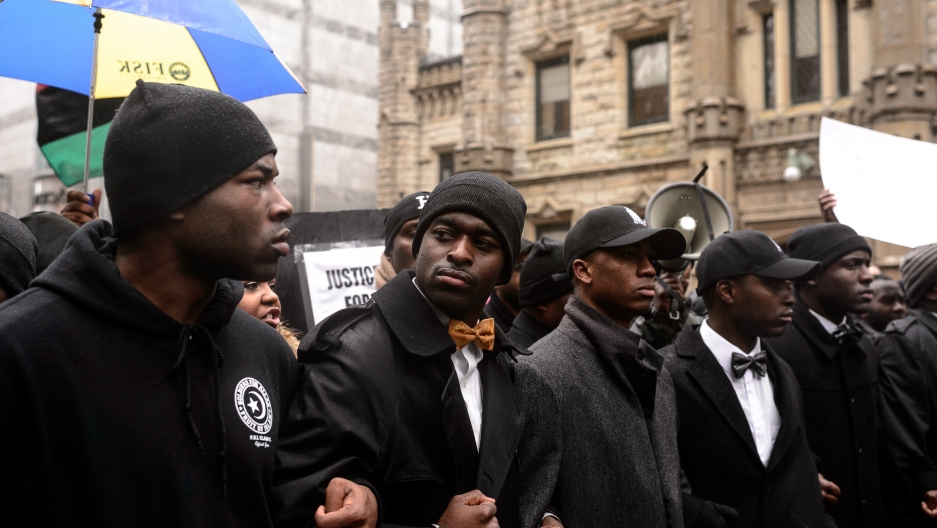 On Nov. 27th, 2015, Chicago marchers protested the killing of Laquan McDonald, who was shot 16 times by a Chicago police officer who has since been charged.

On Nov. 24, the day the Chicago Police Department released video of 17-year-old Laquan McDonald being shot 16 times by an officer, protesters gathered outside the office of Cook County State’s Attorney Anita Alvarez. Inside, dozens of chairs lined the walls. Snacks and coffee had been laid out for guests in a corner of the room. The space was set up for what was billed as a public meeting to discuss the video.

But activists were denied entry by staff and police officers. As tensions rose and a yelling match began, I attempted to interview people amid the commotion and was rebuffed, over and over again.

A young black activist turned to me and said I was “taking up valuable black space at an action about black suffering.”

Reading between the lines, I knew I was being asked to move. I agreed. As a Chicano journalist who comes from an activist tradition, I know the front lines of any movement calling for justice are (and should be) led by those directly, and most severely, impacted by the injustice. As a cisgendered, able-bodied, “Latino-looking” man, I don’t experience police and state violence on the scale that black people do. So I reconsidered my position, and I put my notebook down.

In many ways, the Black Lives Matter movement has set the agenda for newsrooms across the country in 2015. The largely decentralized movement, adept at attracting engaged audiences and turning local cases into national news, has ensured that police mistreatment of black people gets the scrutiny it deserves. But with more media coverage has come more backlash against perceived slights between activists and journalists.

In Chicago, the last month of 2015 has been a period of near-constant upheaval—the police killings of Laquan McDonald, Ronald Johnson, and Rekia Boyd have been in the news nearly every day. It’s in no small part due to the pressure applied on officials by mostly young black activists tied to the larger Black Lives Matter movement across the country. Protests have continued almost every day since the Laquan McDonald video was released.

“In those moments, we are dealing with painful and traumatic issues which can make it hard to perform in front of a camera,” Imani Jackson told me in a later interview. She’s a queer activist with Black Youth Project 100, a group that has helped organize many recent protests in Chicago, some of which have included “black-only spaces” where all nonblack people (activists and journalists alike) are asked to stay away.

The spectacle of black death

This tactic gained attention after a highly publicized incident at the University of Missouri when an ESPN journalist was restricted from activist space on campus; and later at Loyola University in Chicago, when organizers on campus stood in solidarity with Mizzou students and barred a cameraman from entering a circle formed by students. (Loyola is a private university, unlike Missouri which is public.)

In both cases, black students were demonstrating against issues that led to unbearable conditions on their campuses: low retention rates for black students, anti-black hate crimes, hostile campus police, and more. Many, including President Barack Obama, rushed to judge students’ exclusionary tactics as a violation of First Amendment rights. The discussion about why and how university spaces devolved into oppressive and intolerable spaces for black students was passed over.

Jackson said activists want safer spaces for processing, grieving, and decompressing at a time when the “spectacle of black death” broadcast in popular culture can traumatize and retraumatize members of the black community.

And it’s not just emotional — it’s strategic. Jackson said there needs to be space to determine media strategy away from the prying cameras and hounding reporters who may capture an off-message, candid statement from someone.

Of course, it raises the question why such “safe spaces” must be in public, rather than in a home or office, where people do have a reasonable expectation of privacy. In truth, activists are developing both types — but the public ones serve their own purpose: to reclaim space that journalists see as fair game for consumption and questioning. It’s a strategy that complicates notions of how civics and democracy are supposed to play out in the public square.

Protecting a journalist’s rights in these moments is critical. As a matter of law, journalists have an indisputable First Amendment right to report on events occurring in public spaces. But the defense of those rights shouldn’t preclude an empathetic and respectful response to the demands of activists and the trauma experienced by black people.

Giving room and respect to black activists — many of whom are young, belong to identity groups that are often victimized, and are dealing with very raw trauma—is a way for the world (and journalists) to signify that black space matters, too.

An invitation to a bigger story

Confronted by the idea that I was “taking up valuable space” outside the state’s attorney’s office, my instinct was to take a step back—not just out of respect but also to evaluate how I would proceed. What was the story going to be if I couldn’t get anyone to speak to me?

Journalists are trained to be nosy and intrusive; another journalist at the scene told me that going into those “uncomfortable” spaces to get the story is what his job requires him to do every day.

The strategy of defining “black-only spaces” fits within a larger media strategy to prevent unfair portrayal of black people in news reports, according to journalists and activists I interviewed in Chicago. DNAinfo Chicago reporter Tatiana Walk-Morris, who is black, said lack of racial diversity, coupled with shrinking newsrooms in an industry historically dominated by white men, means fewer voices of accountability when covering actions about black suffering.

“These young activists are smart. They know how they’re portrayed in media,” she said. “It creates a sense of guardedness because you’re not sure what you’ll read in the paper.”

Walk-Morris said she has never been barred from black-only spaces: “It’s one of the few times when my skin is not a disadvantage.”

The glut of coverage of protests since the Laquan McDonald video was released has run the gamut from fair reporting to the excessive use of instant-playback and GIFs that normalize and ritualize scenes of black death. Activists said that they often feel conflicted about inviting reporters to events because they know the media coverage can benefit them, but there’s also a chance of being misrepresented.

“Media has both been doing harm to our cause and at the same time getting our message out there,” said Veronica Morris-Moore, an activist with Fearless Leading By Youth. She added that reporters sometimes use “dehumanizing language” even when they “get the story right.”

One of the prominent arguments made by activists during this time is that reporters often assume protests are the only actions that activist groups plan. Camesha Jones, communications director for BYP100, said, “Media asks for interviews and whether there are going to be protests and violence.”

For these Black Lives Matters groups in Chicago, protests are but a small part of what many consider a full-time job. They run public education/awareness campaigns about criminal justice, violence against black women, and workplace discrimination and advocate for a federal jobs program. They host art galleries and public teach-ins.

But Jones said that media only come around for interviews when there’s a chance of violence or flashy protest. “[They ask]: Are there going to be riots?”

Conor Friedersdorf of The Atlantic speculates activists have “weaponized” safe space. This statement fits all too firmly into a culture where black skin has been weaponized, and as Chicago organizer and educator Mariame Kaba once said, is viewed as “dangerous by default.”

The idea of civic journalism is to give voice to the voiceless. While protesters may not be “voiceless” at the time, they are “intentionally silenced and preferably unheard” in the media landscape. Journalists should remember that many activists come from marginalized communities that have a fine-tuned awareness of unequal treatment.

As a Chicano, challenges to unfair media representation resonate with me. “Chicano” is a chosen identity for people of Mexican descent who reject the narratives and myths that are part of the political projects of “whiteness” and Manifest Destiny. My identity as a Chicano journalist acknowledges the conflicting latticework of journalistic standards and activist principles I’m loyal to. While my reporting standards are objective, being neutral is a luxury I don’t have.

To be clear, I’m not calling out reporters: I’m inviting us all to participate in racially just, equitable, and solutions-oriented journalism. We need to create spaces—and nurture existing ones—for reporters to examine our own position in the oppressive structures activists are working to dismantle. A responsible journalist should acknowledge—and maybe even contribute to healing—the pain and distrust many black people feel toward a country that has never ceased the violation and destruction of their bodies.

After being denied entry to the state’s attorney’s office, activists regrouped at a nearby gallery. They closed it off to press. Nonblack activists were also turned away from the space.

More reporters arrived on the scene. The big cameras, microphones, and bright lights created a voyeuristic backdrop that only intensified the uneasy atmosphere.

Morris-Moore told reporters people inside were frustrated with them: “I need you to respect these people in here if you want to talk to them, or if you want them to talk to you. So if you guys could go … and not look like you’re here to capture a circus show.”

Some cameramen pressed their lenses to the glass, trying to see what the scene inside was. But to me, it seemed wrong to photograph the group of black youth inside, who were undoubtedly bearing a cognitive load I can never understand.

“We don’t deserve to have cameras shoved in our faces,” Morris-Moore said. “We are mourning.”

Martín “Xavi” Macías wrote this article for YES! Magazine in collaboration with City Bureau, a Chicago-based journalism lab. He is a multimedia journalist and mentor with City Bureau. This story was originally published by YES!, a nonprofit publication that supports people’s active engagement in solving today’s social, political, and environmental challenges.