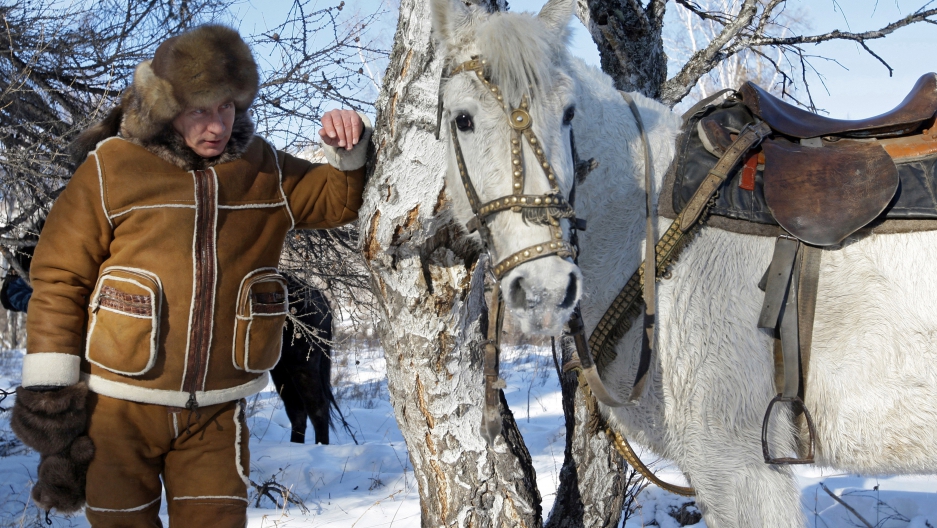 Vladimir Putin stands next to a horse during a working visit to the Siberian Khakasiya region in 2010. This photo is the featured image for February 2016 in the new fan calendar made in the Russian president's honor.
Credit: Ria Novosti/Pool/Alexei Druzhinin
Share

Christmas may be over, but it’s not too late to get your hands on this year’s hottest Vladimir Putin-themed gifts.

The Russian strongman, who enjoys an approval rating most Western leaders could never imagine, has always been more than just a president. He’s even fueled what some might say is a personality cult, with his face (and more) appearing on T-shirts and other tchotchkes.

This holiday season, it’s all about the inspiration that comes from having Putin close by, whether on your wall or your nightstand.

A Putin for every month

Putin’s love for posing — outdoors, at the gym, with wild animals — is already well-known. But those headline pictures always feel so distant. Now there’s a way to bring him right into your home or office.

A Russian tabloid has published a limited edition calendar for 2016 featuring a posing Putin on every page, along with a pithy quote to complete his macho image.

Here’s a line for the month of March that will make mom swoon: “I like all Russian women. I personally think Russian women are the most talented and beautiful!”

Wise words seem to be this season’s main theme.

How else could you explain the next excellent gift item: a 400-page collection of presidential statements and speeches called, “Words Тhat Аre Changing the World: Key Quotes From Vladimir Putin.”

For Russian bureaucrats, it’s a bit more than just recommended reading. A leading newspaper reported this week that the Kremlin handed out some 1,000 copies to state officials, while a top presidential advisor recommended at a recent meeting that every politician have the book at their desk.

The book pulls together 19 speeches spanning about a decade, at least some of which reportedly focus on asserting Russia’s role in world affairs. It was published by a prominent pro-Kremlin youth group that describes Putin’s words as “prophetic” but refuses to disclose its source of funding for the project.

If all this sounds a bit too Orwellian, it probably is.

But maybe that’s just par for the course in Russia, where George Orwell’s dystopian classic, 1984, was one of this year’s best-selling books.

“Words Тhat Аre Changing the World” will be available for the public to buy in January 2016. We’ll see how that one sells.