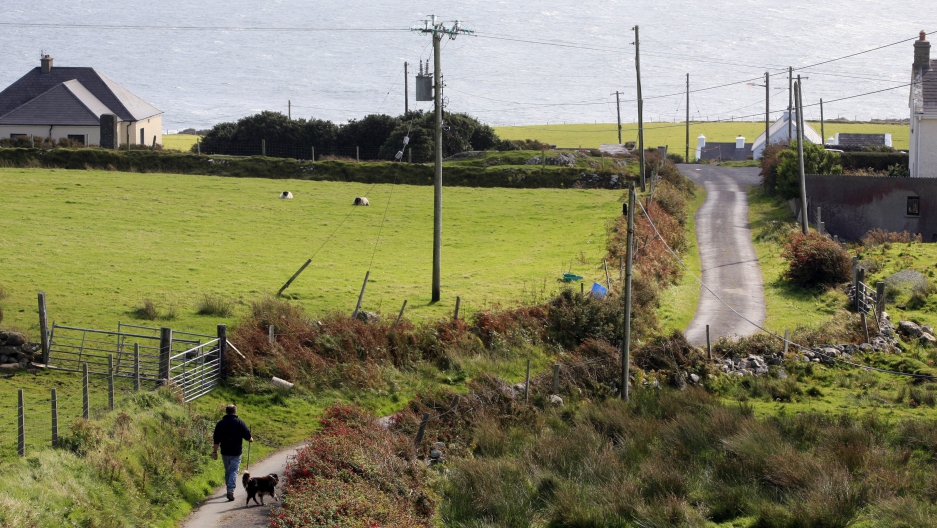 Joe O'Malley and his sheep dog Floss walk along a lane while checking on his grazing sheep in County Mayo, Ireland in 2009.
Credit: Cathal McNaughton
Share

Ireland underwent a massive prehistoric wave of immigration from the Middle East and eastern Europe, which could explain how modern farming arrived in the region, researchers said in a study released on Monday.

The major finding, traceable via genome sequencing, may end a long-running debate among scientists, some of whom thought local populations abruptly switched from being hunter-gatherers to using organized farming techniques simply as part of local adaptation.

In fact, the changes came with this massive influx of people from the Middle East and eastern Europe, according to the study in the Proceedings of the National Academy of Science (PNAS).

The Middle East was where modern farming was developed about 10,000 years ago.

More from GlobalPost: What Northern Ireland teaches us about today's war on terror

And while Ireland is often thought of for its wailing-pipes Celtic connection, its history is a bloody quilt of many invasions and influxes — Celts, Vikings, Normans — all before becoming the first outpost of the British empire.

Researchers believe that Ireland's underlying Near Eastern genetic code might have some connection with Celtic language introduction or evolution.

Dan Bradley, lead researcher and a genetics professor at Trinity College, Dublin and his team sequenced the genome of an early farm woman who lived near modern-day Belfast about 5,200 years ago, as well as three Bronze Age contemporaries from about 4,000 years ago.

"We estimate that our Neolithic individual (the more than 5,000 years ago early farmer) has about 60 percent Middle Eastern origins. This is a rough estimate but we are certainly comfortable stating that she has majority Middle Eastern ancestry," said Bradley.

It is not clear however that this population influx also introduced ancestral Celtic languages of Ireland, Scotland and Wales — but the research suggests that that is a strong possibility.

"Our discovery of a major migration to Ireland in the Bronze Age does at least identify this horizon as a candidate for such an introduction," he said.

More from GlobalPost: The world's other refugee crisis is about to begin, again

Meanwhile, the three Bronze age men whose genes were sequenced from remains found on Rathlin island off Northern Ireland had 30 percent genetic makeup "from the peoples originating above the Black Sea" — in other words modern day Russia and Ukraine.

"However, in this respect they do not differ very much from some central European Bronze Age samples and as such the amount of introgressing ancestry from mainland Europe could have been much greater than this."

The affinity between the three Bronze Age men and modern Irish, Scots and Welsh is quite strong, suggesting there were significant Celtic genetic traits 4,000 years ago, said Lara Cassidy, another author and genetics professor at Trinity College.

Their Y chromosomes often have a mutation common among Celtic-descended people C282Y, a disorder that causes iron to overload in different tissues.