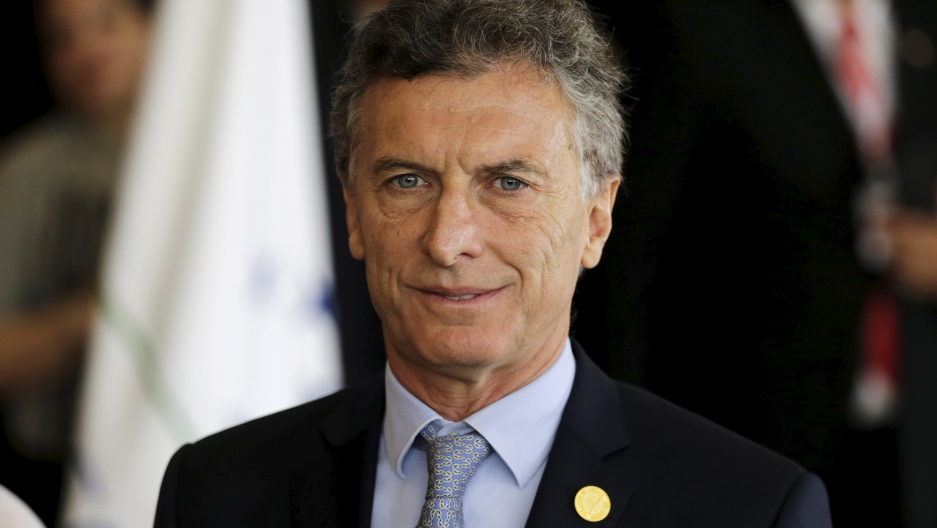 Argentina's President Mauricio Macri arrives for a session of the Summit of Heads of State of MERCOSUR and Associated States and 49th Meeting of the Common Market Council in Luque, Paraguay, December 21, 2015.

Argentina's new conservative president, Mauricio Macri, is off to a fast start. He wants to boost the economy and fix what he sees as a byzantine system. So he's devalued Argentina's currency. That's something he pledged to do in his campaign.

But many people didn't think he'd act so quickly.

"I think one of the reasons Macri did all these things right after he took office was that he wanted to get them out of the way before the full summer starts," says Associated Press Editor Peter Prengaman in Buenos Aires. "He wanted to do it when people were more focused on the holidays and Christmas, because this is a real bitter dose of medicine."

Prengaman says the move primarily benefits exporters. The agricultural sector the most. Argentina is among the world's largest producers of soybeans. It also grows corn and plenty of dairy products for neighboring countries. For years, this sector had a tough time shipping their products abroad due to the exchange rate. This won't be a problem now.

But it's certainly a problem for consumers. At least for now. Prengaman says it's a pain in the wallet to go to the grocery store and look at the prices. "It's kind of a ridiculous experience," he says. "You feel that maybe you are in London, or someplace that is just crazy expensive."

So it's a double-edged sword. You may improve your exports, but you may lose the support of your own population. Macri didn't win by much. So this is a strategic gamble. "He's betting that he's going to be getting more foreign investment. That an Argentina that is opened up to the world is one that will perform much better. And in the end, people are going to be happy. So that's kind of the bet."

It shouldn't sit well with Argentines. They've had to endure with bad economic times. I still remember traveling to Mendoza in the early aughts. The people sat around all day drinking yerba mate in the public parks. I asked some of them what the secret is to this fabulous existence. They said there's not much else to do when there's no work. It was sharing in the depression, one pour at a time. I realized quickly it wasn't as fabulous as it looked. They were bored and apathetic about their future.

I imagine the same people are having flashbacks.

"The policies that led to the bust in 2001 and 2002 were 'open the economy up.' I think Macri learned his history. He says he will keep a social net for the poor. But there's a lot of fear."

A previous version of this story incorrectly stated Argentina is the largest producer of soybeans. It is among the largest.