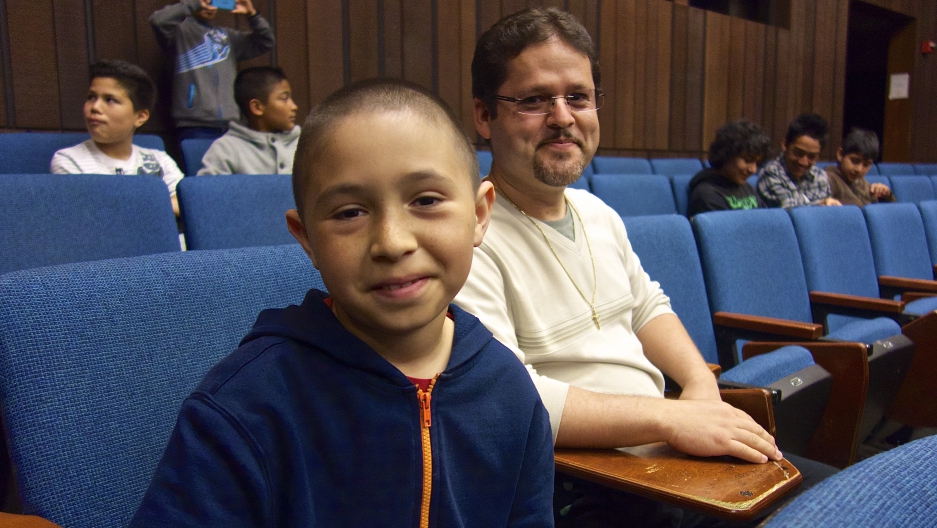 Jose Ansaldo and Oscar Ramos during a field trip to UC Berkeley.

It’s estimated that more than a million undocumented children are living in the US. And for those who are children of migrant farmworkers comes even more uncertainty. A new PBS documentary tells the story of one of those children.

“East of Salinas” follows Jose Ansaldo. On camera, we first meet him when he is 8 years old, after having moved between seven different schools in three years in California’s Salinas Valley.

The film also follows his teacher, Oscar Ramos, who has been an important mentor to Jose and other kids. Ramos teaches third grade at Sherwood Elementary in Salinas, where 90 percent of students are the children of migrant farmworkers. Ramos grew up in the area and knows what kids like Jose are up against. That’s because, as a child, he grew up working in labor camps, picking garlic, lettuce, strawberries, and grapes with his family.

“I saw myself in Jose,” Ramos says, “He is now what I was many years ago. The son of migrant workers who was very sleepy and hungry everyday in the class.”

Fortunately, Ramos says, the days of the labor camps are now gone – replaced by farms run large agriculture companies – and not as many children, like himself when he was younger, are forced to work alongside their families in the fields. But the days are still long for children like Jose, he says. Jose’s parents work in the lettuce fields and, everyday before sunrise, Jose is dropped off to a babysitter by his mother before she heads to work. It’s a routine many children Ramos teaches face each day.

“They get up, they go to the babysitter’s. Parents go to work, and they take a short nap and then they have to come to school and they’re expected to be fully concentrated without a full stomach or a full night’s sleep.”

One thing that's improved, Ramos says, is the number of children not dropping out or transfering schools throughout the year.

"What used to happen in the past was the entire families would leave," Ramos says, "In one case, one of our teachers had 28 students. She ended up with only three of her original students."

But Ramos and other teachers stepped in to help families make an effort for their children to stay in school for the duration of the school year.

"The trend now is the fathers are the one that go to Arizona, for example. The moms and the children, they'll stay. They'll stay with other families."

With many fathers gone for work, Ramos has become a father figure to Jose and many other children. He says his childhood working in the labor camps has created a bond that he believes makes it easier for his students to open up to him. And for Jose, Ramos says, that's important because he also must deal with other external factors, such as crime and pressure from gangs in his neighborhood, that make growing up harder for him than Ramos when he was a kid.

But it hasn't stopped Jose's love of school, particularly when it comes to math. In the film, Jose is shown competing in a math tournament against children from other districts. He also hopes to follow in Ramos's footsteps one day and attend his college alma mater, the University of California, Berkeley. Ramos says he knew since he was a kid that he wanted to be a teacher and after graduating from Berkeley, he didn't have to think twice about where he would teach.

"I wanted to come back and teach at a place just like Sherwood, a place with a large migrant population," he says,"just because I can make a big difference. I can make a difference at Sherwood. I don't need to be in any other school because they don't need me, but these kids do."

"East of Salinas" airs Dec. 28 on Independent Lens on most PBS stations. You can find out when it's airing on your local station here.