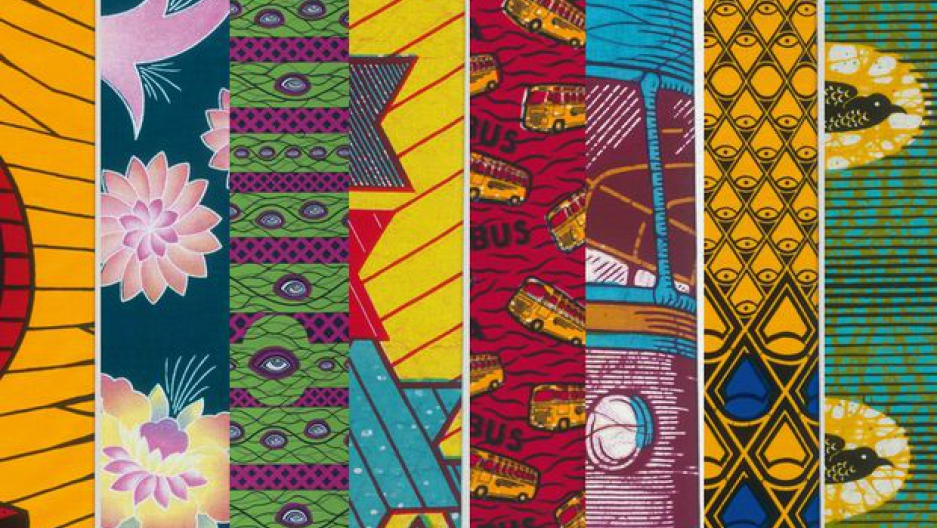 A range of fabric patterns from the Dutch company, Vlisco.

African textiles are distinctive for their vibrant colors, bold patterns, and batik dyes that give the fabric a unique, crackled texture. But I had no idea that some of the trendiest of these prints are actually designed and produced in the Netherlands by a company called Vlisco.

Inge Oosterhoff wrote a wonderful deep dive into the history behind the Vlisco textile house, and explained how their designs have remained hugely popular in Africa since the late 1800s.

Vlisco doesn't just make fabric; they're known for their printed designs. And unlike many fashion companies, Vlisco doesn't name their patterns: Each is given a number and then distributed to different areas in Africa. Some patterns are designed with different countries in mind, while others are distributed widely around the continent. As the patterns catch on among shopkeepers and consumers, many of them get colorful names like "Love Bomb," "Tree of Obama" and "Mirror in the Sun." But the names aren't even the best part: Many popular patterns have developed specific cultural meanings and subtexts.

I spent a whole morning digging into the extensive Vlisco archives, where staff archivists are crowdsourcing some of the stories behind the patterns, and I wanted to share a few (and also just some really rad fabric). 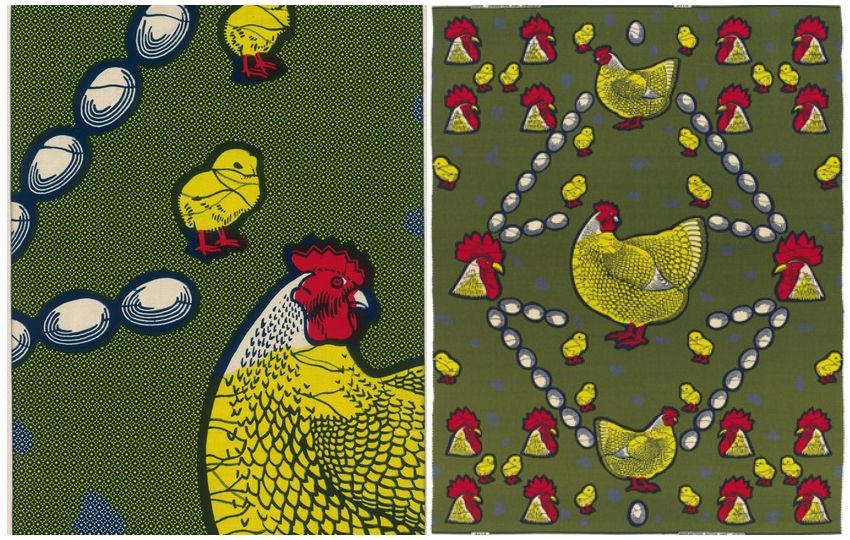 At left, a detail of "La Famille" pattern; at right, the full piece of fabric.

"La Famille," also known as "Happy Family," is Vlisco's best-selling pattern, made in a wax block style (you can read a bit about that process here) that's an industrialized version of a traditional batik print. The hen, rooster, chicks and eggs represent a traditional family with mother, father, children, and babies on the way. The central placement of the female figure also implies that the woman is the center and head of the family. 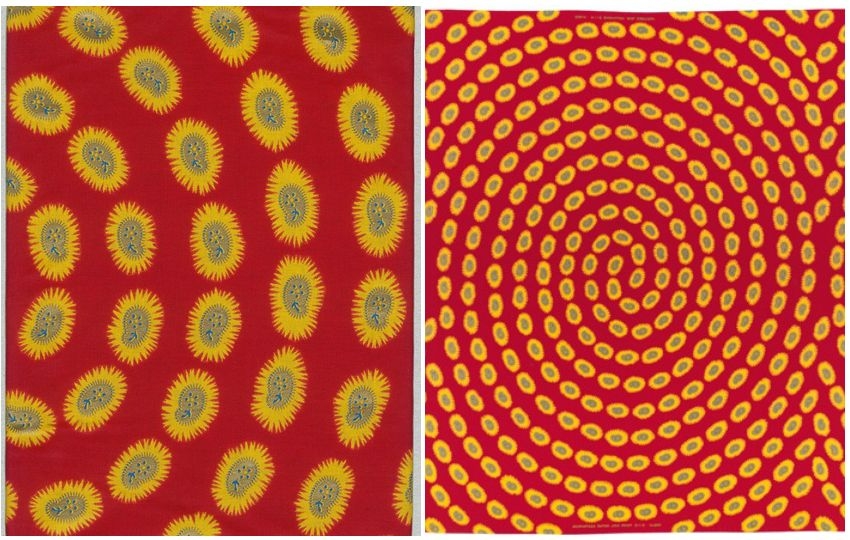 A pattern known alternately as "La Lune" and as "Tchi-koui" (which translates to "Small Change").

This print is an interpretation of a common tie-dye motif in Kano, Nigeria. There, the spiraling pattern represents the Sultan surrounded by his entourage. But in Togo, the pattern is commonly referred to as "Tchi-koui," or "Small Change," because it resembles the shells that were once used as currency. 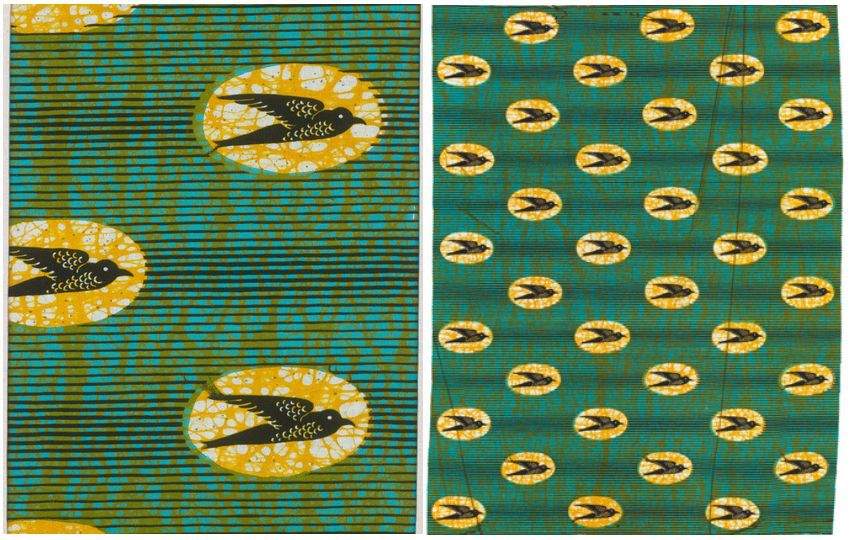 A detail of the "Air Afrique" print at left, and the full piece of fabric at right.

Many patterns are sold widely in Africa, and different countries and cultures adopt different meanings and associations. This print is a perfect example. The fabric was used for airline uniforms in Togo, so there the pattern is commonly referred to as "Air Afrique." The pattern also symbolizes asking for a favor, like the hand of a woman in marriage. In Ghana, the swallow refers to the transience of wealth, and the pattern is referred to as "Rich Today, Poor Tomorrow." It has a similar connotation in Benin, where it's referred to as "L'argent vole," where it could either be interpreted as "Money Flies" or "Stealing Money."

This print (shown here in three different colorways) has been assigned different meanings in the different communities. In Nigeria it's simply referred to as "Eyes," and in Ivory Coast it's called "L'Oeil de Boeuf" ("Bull's Eye"). But in Ivory Coast it also has a double meaning — when people call the pattern "Lisu ya Pité" ("Lustful Eye"), it means that a woman is wearing the fabric to show a man she desires him. 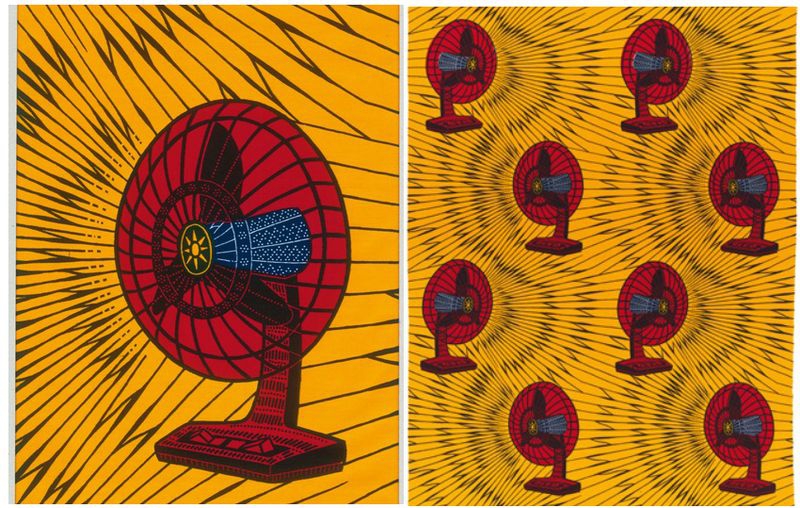 This pattern is known as "Fan Ventilateur."

The thing that's most striking to me about Vlisco patterns is that while the bold colored prints feel timeless, the company often incorporates figures that feel quite contemporary, like this print with a fan (my personal favorite). The former head of Vlisco's design department, Cees Kranz, saw street vendors in Niger who would use electric fans in their stalls to signal their status. Kranz commissioned the Vlisco design team to develop a pattern with that concept. 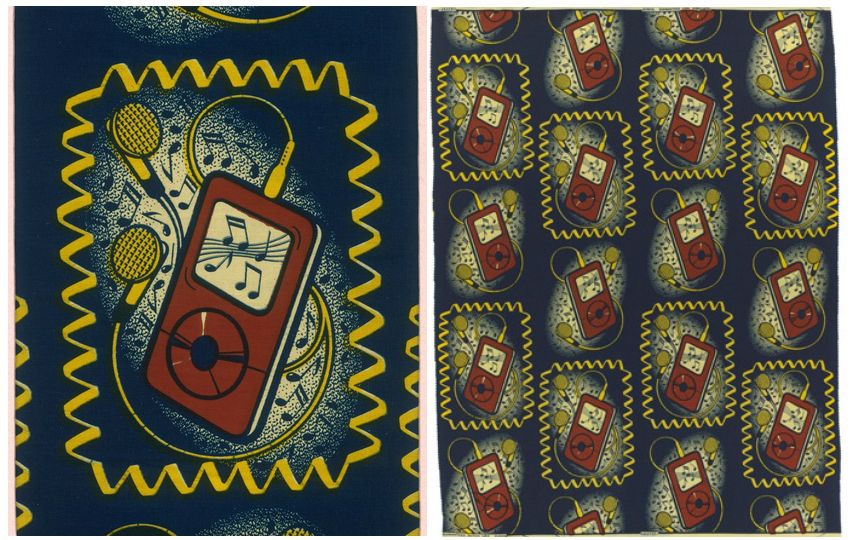 A detail of Vlisco's "iPod" print at left, and the full fabric at right.

This pattern featuring iPods is another, more recent example of a print that incorporates technology and modern life while maintaining Vlico's classic batik style. This pattern is popular in Nigeria. 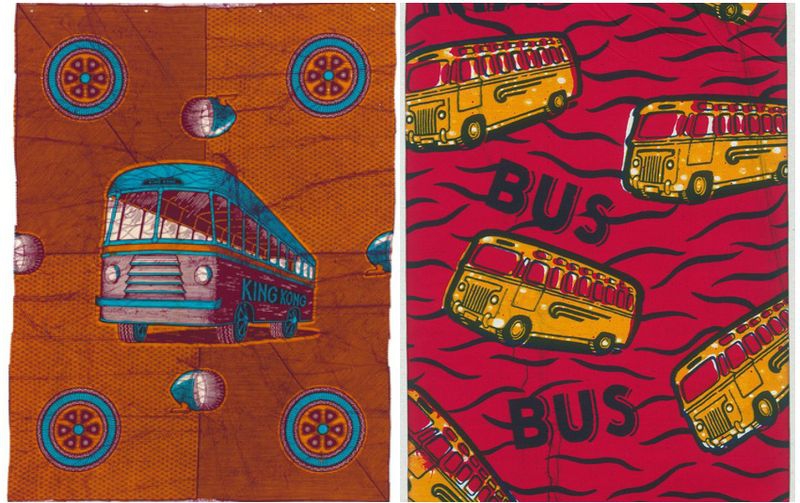 The Vlisco archives haven't attached any meaning to either of these patterns, but I love the bus motif. 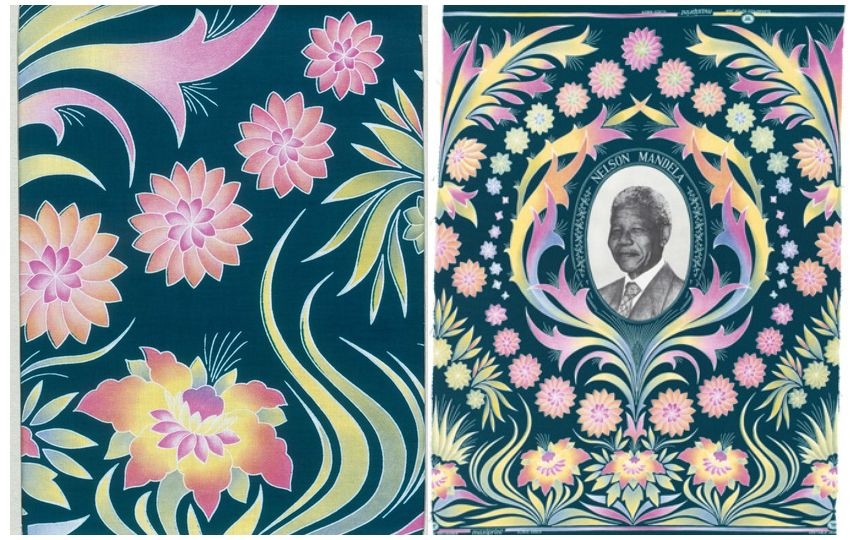 Many Vlisco patterns commemorate historical events or figures, like this print of Nelson Mandela. Vlisco launched the fabric following Mandela's release from prison in 1990, although the Indonesian-inspired background was originally designed in 1989 to pair with different portraits. While this design was initially popular in Nigeria, it is no longer sold there because Nigerians do not accept Mandela's divorce from his wife Winnie, who has Nigerian ancestry.

If you look in the printed area of the design, you can see a color gradient effect. This treatment is called a "maxi print." 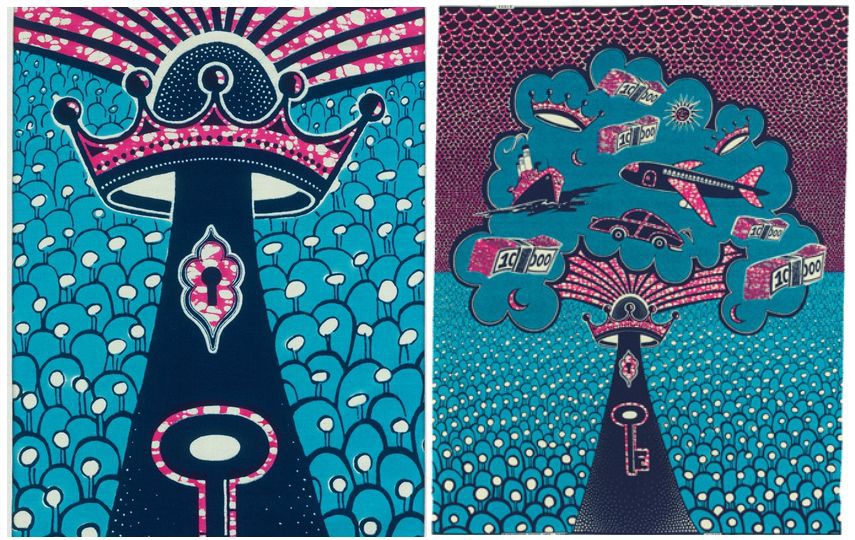 A pattern from Vlisco's Collage de Vie collection commonly referred to as "Tree of Obama" and "Obama's Key to Success."

Vlisco launched its Collage de Vie collection at the same time as the 2008 presidential election. This pattern became a hit when it was given the name "Tree of Obama" or "Obama, the Key to Success."

Another Vlisco print that has become associated with the Obama family: this print is called "Sac de Michelle Obama" ("Michelle Obama's Purse").

The Obama family is popular in Africa, and this pattern came to be named "Sac de Michelle Obama" ("Michelle Obama's Purse"), after the Obamas visited Ghana (although the pattern does not actually depict a specific bag worn by the First Lady). The design is also known as "Sac d'Olive," "LV" (which refers to Louis Vuitton) and "Sac a Main" ("Handbag").