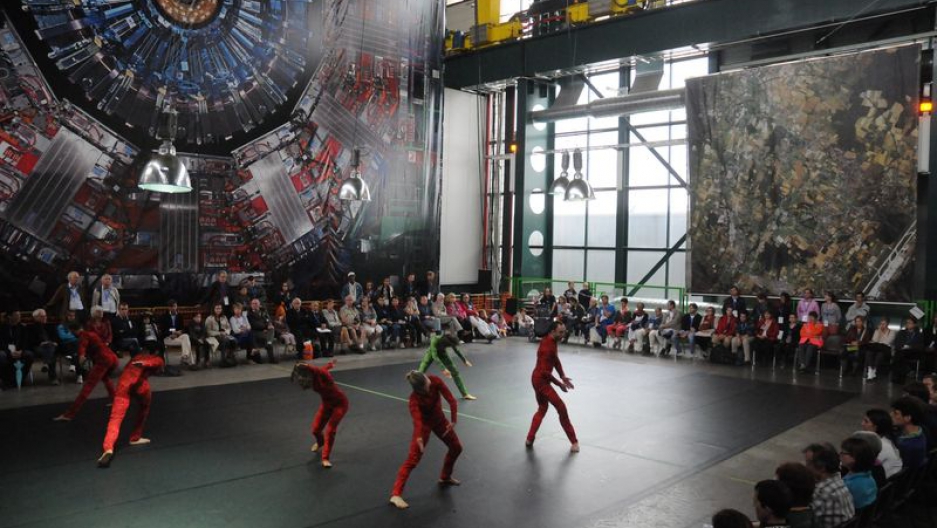 The premier of "Quantum Dance," by Gilles Jobin and Juilius von Bismarck, with a backdrop image of the CMS detector

On any given day, 2,000 scientists and engineers work at the European Nuclear Research Center (CERN) in Geneva, Switzerland.

They’re analyzing data coming out of the Large Hadron Collider, the world's largest particle accelerator, which is trying to recreate the Big Bang in a series of tunnels underground.

It's not the kind of place where you would expect to find artists. But since 2011, several groups of artists have been given the opportunity to work at the facility as part of CERN’s artist-in-residence program.

Fontana had the idea to make the Large Hadron Collider into a sound sculpture — a work of art that has, in turn, inspired his partner scientist.

“If I was forced to say something about how I imagined a lot of artists, I would have said something to the effect that, you know, they’re creators, they make things. But Bill was kind of weirdly almost like a discoverer,” Patil says. “He would just be walking around with these accelerometers, which are these contact microphones, and whenever he'd find something that would really captivate him, he would be like, 'Oh my god,’ and then he'd sit down and record it. He had a very almost explorer-like streak about him.”

Jan Peters, a German video artist joined the residency program in 2013. He was given access to CERN’s underground tunnels while the collider was turned off — something almost no one ever gets. He came back with about 100 hours of footage from inside the giant tunnels. Peters worked closely with Neal Hartman, an engineer who works on Atlas, one of the biggest experiments on the accelerator where the particles actually collide. Hartman was struck by the philosophical approach Peters took to his film project.

“Even though his practice was in many ways the most straightforward — meaning, turn a camera on the device and observe it — in a way his question is the most philosophical. [He is] looking at what we do, what it means, what the people mean, how they relate to each other. And he's going to turn that into a film that will be very personal. Because that's what his work is about — why CERN matters, you know, to him,” Hartman says.

There is important scientific work happening at CERN, and some of the world’s most talented and intelligent people are using formulas, giant machines, and experiments to answer questions about the origins of the universe.

According to Peters, however, many of the important philosophical questions and discussions at CERN take place not in labs, but in places where people relax and come together.

“My experience was that the moment when you are in touch with ideas of the beginning of the universe, that’s mostly in those conversations that take place in the elevator, or even more in the cafeteria,” Peters says.

Hartman, for one, is a fan of the artist-in-residence program, and the way that artists are approaching the work at CERN.

“We ask big questions in particle physics, and sometimes those things are a bit overstated,” Hartman says, “But the simple reality is, if you really start to think about it, we are trying to figure out where we came from.”