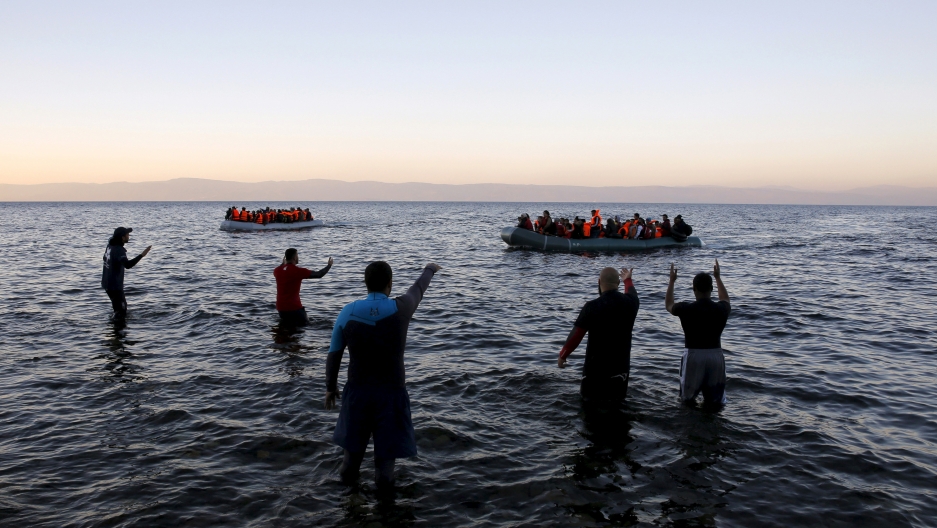 Volunteers and rescuers try to coordinate and guide two rafts overcrowded with migrants and refugees as they approach a beach in the Greek island of Lesbos.

Cold weather has not stopped the flow of refugees this holiday season. Thousands continue to flee the wars in Syria and Afghanstan for a better life in Europe. And these refugees landing on the shores of the Greek island of Lesbos can't help but remind locals of the ghosts of refugees past, says reporter Jeanne Carstensen.

She recently spent time on the Greek island of Lesbos, reporting for PRI's The World and more recently for Foreign Policy. Looking upon the current refugee crisis, Carstensen writes that it's hard not to think about the generations of refugees who have come through Lesbos.

On Xmas day a reminder of the refugees on Lesvos island. Could be a nativity scene. #xmas2015 #refugeesGr #Lesvos pic.twitter.com/Ayy38holSL

Carstensen has found that many of the people assisting the refugees today are the descendants of Greek refugees who fled Ataturk and Turkish forces after World War I, when thousands arrived to Lesbos and other Greek islands in wooden boats.

One Greek journalist she became friends with, Stratis Balaskas, a correspondent for the Athens News Agency, told her that his father arrived in Lesbos in a refugee boat at the age of 6, after he was orphaned during the Greco-Turkish war.

“He told me that many people on the island have stories like that, so you really have descendants of refugees meeting this current generation of refugees,” she says.

Dawn on Christmas morning came with another boatload of Syrians & Iraqis & their beautiful children #MerryChristmas pic.twitter.com/JDNaLpJFEJ

Carstensen thinks that this heritage helps explain why many of the people of Lesbos have been so willing to help refugees. As she wrote in Foreign Policy, “over 60 percent of Lesbos’s population of 86,000 are the children, grandchildren, or great-grandchildren of the refugees who arrived in 1922; many grew up hearing about the terrible deprivation suffered by their relatives.”

Related: The American who helped save hundreds of thousands of refugees ... in 1922

Still, the island’s resources have been stretched thin this year, and Carstensen worries about what lies ahead.

“I think that these are very kind people and that kindness will last a long time, but there are stress points and that has to do with the resources on the island,” she says. “Greece is in a crisis. Their healthcare system is under incredible stress and there are only four ambulances on that island to begin with. So these are the points where I see that their could be stress overtime, as the locals feel that their resources aren’t even taking care of their own needs, and they’re still having to tend to all these refugees that continue to arrive.”

But many people on the island continue to do what they can to help. She recalls seeing this in Sykaminia, a small fishing village in Lesbos where many of the migrant boats land. Often, the boats need to be recued by the Greek Coast Guard, and the refugees arrive in the middle of the night, wet and cold. Local cafe owners, many themselves the descendants of refugees, have been quick to open their doors.

“If it’s at night I saw numerous times that they take people into the cafe to warm up, and then locals would go to a store room and bring clothing," she says. "This is something the international volunteers are doing, but also the locals are very involved in it as well.”