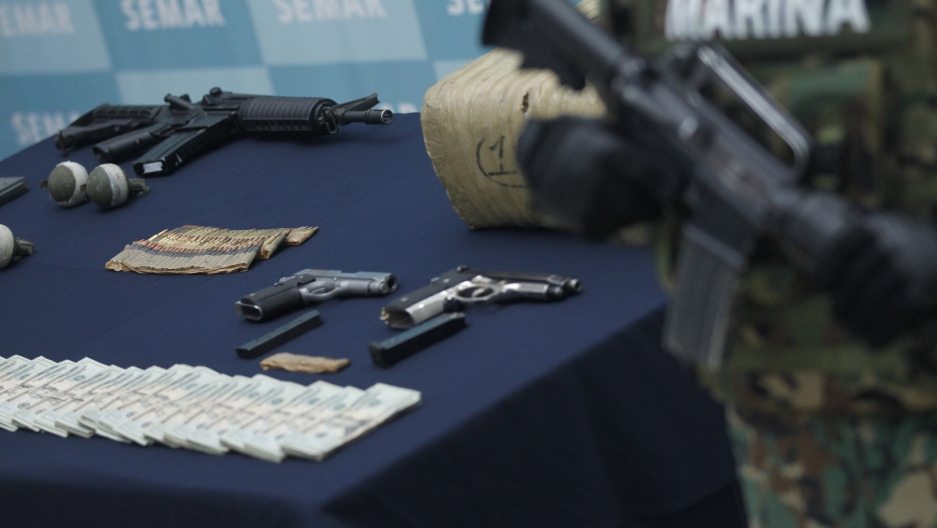 Guns and money seized from a suspected leader of the Zetas drug cartel are pictured in a press conference in Mexico City September 27, 2012. Many of the arms used by Mexican cartels come from the US and Central America, but that's not the full story.

Mexican military and police authorities are still at war with the country's drug trafficking organizations. And the fight still isn't going well. Since 2006, the conflict has generated as many as 164,345 civilian deaths. Experts are still unable to agree if murders are going up or down.

More Mexicans have died violently over the past decade than Afghan or Iraqi civilians over the same period, combined. High-powered weaponry, along with handguns, is playing a key role in driving the violence.

Many commentators assume that arms and ammunition are flooding into the arsenals of drug cartels from illegal dealers spanning the US-Mexican border. There are empirical studies substantiating this claim. Other analysts contend that some military-grade firepower consists of stolen and leftover kit from Central American conflicts of the 1970s and '80s. They are also partly right.

But the full picture is more complex.

In fact, at least 50 countries have exported military-grade weapons and associated materiel to Mexico over the past five decades — with well over half of them exceeding $1 million in sales over the period. There has been a steady uptick in sales since 2006, and especially since former President Felipe Calderon ratcheted up the drug war.

According to UN customs data compiled by NISAT, a research group, the United States is by far the largest exporter of military arms to Mexico. The sums are not trivial. The US has exported more than $300 million worth of “military style” weapons to Mexican authorities since the 1960s; more than half of those sales have been since the year 2000. Top exporters following the US are Italy, Belgium, France and Israel, some of the world's largest manufacturers.

These firearms include crew-serviced machine guns, assault rifles, rocket-propelled grenade launchers, heavy explosives and related munitions, parts and accessories. However, the US and others also sell vast quantities of "civilian-style" weapons, including shotguns, handguns, and related ammunition.

An arms mapping visualization developed by the Igarapé Institute with partners including Google Ideas shows that Mexican imports of all types of weaponry increased steadily from 2006 onward. Moreover, the share of all imports that included military-style weapons shot up from around 10-25 percent a year to 30-50 percent each year during this timeframe.

While many of these weapons are officially destined for the Mexican armed forces and the country's more than 1,600 federal, state and local police agencies, some of them fall into the hands of cartels and militia. In Mexico, military-style arms are frequently diverted and leaked from official arsenals. In some cases weapons are sent to the wrong customers altogether. For example, a recent high-profile case involved 9,000 firearms shipped illegally to Mexico by a German firm.

Of course, military-issue firearms and ammunition are routinely trafficked across international borders, including from the US. The Bureau of Alcohol, Tobacco, Firearms and Explosives (ATF) has traced high-powered rifles and handguns shipped by land, air and sea. One especially controversial operation dubbed Fast and Furious allowed weapons from the US to be smuggled to Mexican cartels for tracking purposes — hundreds were lost en route and linked to subsequent crimes.

Igarapé Institute and University of San Diego research has determined that a considerable proportion of illegally acquired firearms in Mexico were originally sold by federally licensed dealers in the US. Meanwhile, older issue US and Soviet-style weaponry is also trafficked from post-conflict Central American countries, including via El Salvador, Honduras and of course Guatemala.

Military and police stocks in some of these Central American countries were singled out by the International Commission against Impunity in Guatemala as the largest source of illegal firearms in the region. Twentieth-century M16s and AK-47s have surfaced in the arsenals of the Juarez, Sinaloa, Zeta and Gulf cartels, though the quantities are comparatively modest.

Making matters more complicated, the Mexican authorities lack a robust marking and tracing system. They have traditionally relied on their US counterparts for background checks on seized weapons. Getting a handle on leaked and trafficked weapons has simply not been a priority of successive governments.

In the past, samples of seized weapons were submitted to the ATF (using eTrace). Extrapolations generated from these assessments suggest that up to 70 percent of recovered firearms were from the US, though these numbers are disputed on both sides of the border.

While internationally supportive of more gun regulation, Mexico is not especially transparent when it comes to reporting on weapons exports, imports or recovery, as the Small Arms Survey arms barometer makes clear. It is also unable to comprehensively get to grips with where illegal guns are coming from.

At least part of the problem is that under Mexican law, all firearms seized by the government must be surrendered to the armed forces within 48 hours. The military is charged with "safeguarding" these arms and is under no compulsion to assist in related law enforcement investigations. The fact that the armed forces may well be one of the key sources of illicit arms is problematic, to say the least.

In the case of the US, ATF officials are required to submit a formal request to the Mexican Attorney General for each and every weapon (with accompanying data on the firearm type/caliber). As a result, most weapons are simply not traced and abusers go unpunished.

The development of a more effective system for tracing the origins of illicit firearms is a priority for both the US and Mexican governments. The current approach is deeply inefficient. If Mexico wants to do more to stop the shooting, it cannot afford to keep asking questions later.