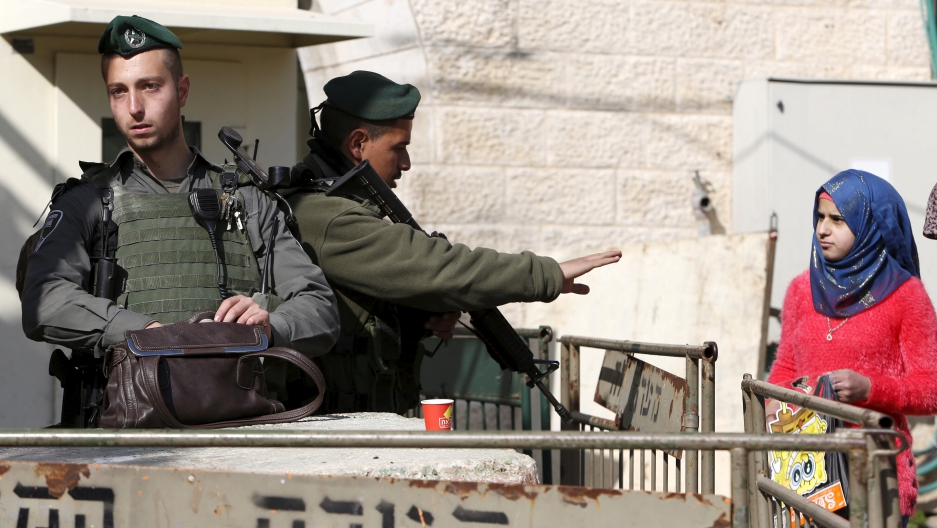 An Israeli border policeman gestures to Palestinians as another searches a bag in the West Bank city of Hebron on Dec. 24, 2015.
Credit: Mussa Qawasma
Share

​JERUSALEM — A majority of Palestinians living in the West Bank and Gaza Strip support violence against Israelis, want to abandon the Oslo Accords, have little or no faith in their own government, and no longer believe in a two-state solution with Israel. About half of Palestinians think a new armed intifada would serve their national interests better than negotiations.

These are the stark findings of a recent poll by the Palestinian Center for Policy and Survey Research (PSR), located in Ramallah. Well-regarded by both Israeli and Palestinian academics, politicians and journalists, PSR describes itself as an independent think-tank that conducts policy and academic research.

Conducted between Dec. 10 and 12, the poll surveyed 1,270 people in 127 randomly selected locations. It is the first poll to be conducted since the recent outbreak of violence in the region nearly three months ago, during which nearly 120 Palestinians have been shot dead by Israeli military and civilians, many after alleged, attempted or actual attacks against Israelis. Twenty-four Israelis have been killed by Palestinian attackers, over half of them in stabbing attacks.

More from GlobalPost: Living and dying in East Jerusalem

"Across all of these questions, I find the results to be depressing and frightening," Professor Khalil Shikaki, PSR's director and senior researcher, told GlobalPost.

Among respondents, two-thirds (67 percent) support the use of knives, and 37 percent believe that the current confrontations will develop into a new armed intifada. Two-thirds (66 percent) also believe that an armed intifada would serve Palestinian interests in ways that negotiations could not. In an open-ended question, the largest proportion of respondents (43 percent) said that the low levels of popular participation in the confrontations — despite the high levels of support — are due to fear of the Palestinian Authority or the Israeli authorities, which cooperate in security matters in the West Bank.

The poll found that 90 percent believe Israel does not abide by the Oslo Agreement, while 68 percent support abandoning it entirely. The agreement is the only framework for relations between Israel and the Palestinian Authority and included Palestinian recognition of the State of Israel.

Only 45 percent of respondents, meanwhile, support the two-state solution. A majority (65 percent) believe that the two-state solution is no longer practical, due to Israeli settlement expansion. An overwhelming majority (82 percent) believe that Israel has no intention of allowing a Palestinian state to be established. In the absence of peace negotiations, 60 percent support returning to an armed intifada.

Shikaki, who has been conducting polls since 1993, said that the data closely reflect findings of another poll conducted three months ago.

He believes that the data regarding Palestinian attitudes toward their own leadership "is in many ways the most alarming” finding. “Palestinians have no faith or trust in their leadership," he said.

More from GlobalPost: How to spot a terrorist, according to the Israeli police (VIDEO)

According to the survey, 65 percent of Palestinians want Palestinian President Mahmoud Abbas to resign. PSR results found that if elections were held today, Ismail Haniyeh, the Islamic leader of Hamas in Gaza, would win over Abbas by 51-41 percent. Abbas' mandate expired in 2009, but he has yet to call for new elections.

Abbas has repeatedly promised that he and the Palestinian National Council, which is set to meet in the coming weeks, will examine the cancelation of the Oslo agreements. A majority of Palestinians don’t believe he will ever actually do this.

Shikaki is particularly concerned by what he refers to as the "Oslo generation" of young people between 18 and 22. "They support violence, they oppose the two-state solution, and they don't believe in the Palestinian leadership. They are the most secular and their support for violence is not motivated by Islamic ideology. They are motivated by their despair."

While the support for violence is strongest among the young, Shikaki notes they haven’t skewed the findings. "In all groups, across all categories, a majority supports violence, is disaffected, and believes that the Israeli government cannot be trusted."

"I worry because the ground is fertile for a major eruption of violence,” Shikaki says, “and I am frightened because there seems to be no one who can stop it."