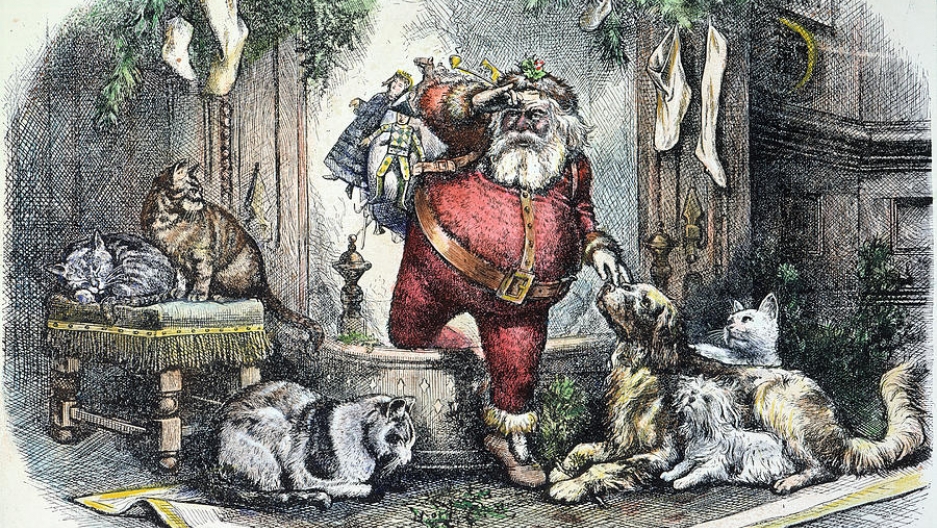 The coming of Santa Claus, by Thomas Nast

If you’ve been tracking Santa’s movements via NORAD, you’ll know that he started, as usual, from his village at the North Pole.

But it may come as a surprise to some that Santa Claus did not always live there.

The earliest published reference to the fact is from December 29, 1866, in Harper's Weekly magazine. The edition featured a cartoon by a famous illustrator called Thomas Nast. It's in a collection of Christmas images, with one image being a village called "Santa Claussville, N.P." — N.P. is of course short for North Pole.

So, I hear you asking, where was Santa before? Well, this is where it gets complicated. Santa is most definitely a child of North America. But he's descended from a variety of immigrants from Europe and the Middle East.

His oldest known ancestors are St Nicholas — who was actually from Turkey, and famous for his gift-giving; and the old Teutonic god, Woden a.k.a. Odin, who had a big white beard and rode through the sky at this time of year on his 8-footed gray horse.

Santa's more recent ancestors include Father Christmas who came from Britain; Sinterklaas from Holland, and Kriskringle from Germany. All of them brought toys and gifts to children around this time of year.

Thomas Nast had a number of clues to help him figure out that Santa was from the North Pole. These were taken from the latest breakthroughs in science and exploration at the time.

Then in the 1840s and 1850s there had been a series of expeditions to the Arctic which had really captured the popular imagination. Magazines like Harper's serialized the dramatic stories of these adventurers (people like John & James Ross, William Parry, and John Franklin). But none of them got to the Pole itself — which remained an unknown quantity for decades to come.

So the North Pole became a mythical, magical place in the popular imagination — somewhere kind of like Shangri-La (except colder) — where anything was possible. So given that Santa's European ancestors lived in the far north, it seemed obvious that Santa himself should chose to settle at the most northerly point of North America after he landed here.

And it was Thomas Nast who appears to have made this breakthrough. After his — umm — research got published in Harper's, the location of Santa’s village became widely known and accepted across North America.