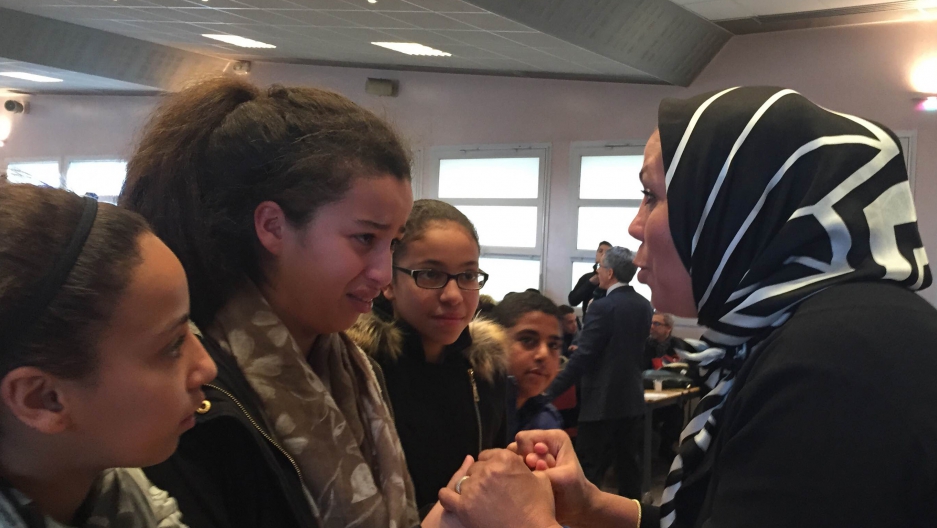 Latifa bin Ziaten (r) speaks with students about her son, Imad, who was murdered by Islamic extremist Mohamed Merah. At the end of her talk, students hug her. One girl says Latifah reminds her of her own mother.

Latifa Ibn Ziaten introduces herself to middle and high-school students with a single line: “I am Imad's mom.”

The couple of hundred French teenagers facing her might not have heard that name before, but they all know the name of the guy who killed him.

In March 2012, Mohamed Merah, a French man of Algerian descent, killed seven people in a series of shootings across France, including three children at a Jewish school. Merah’s killing spree and the manhunt that followed marked the beginning of a bad streak — French-born, radicalized young men going to war against their own country.

She has been criss-crossing the country ever since, touring schools and prisons. She always tells her story standing up, a tribute to her son who refused to lie down before Merah shot him. And she tells it from the day she arrived in France.

“I came from Morocco when I was 17,” she says in a soft voice. “I didn’t know how to read. France took me in, and my neighbors helped me out. They taught me how to speak and write the language. Then my husband and I started a family, we had five kids. That was my dream, but also a responsibility.

"I worked the whole time, eight hours a day. In the weekend I cooked to earn extra money, to pay for the kids’ clothes, private lessons, vacations. They grew up with a lot of dignity, respect and love. They were my pride. Mohamed Merah robbed me of that success.”

Latifa says life was tough but that it was easier back then to integrate. Her neighbors were French. Now, she says, most immigrants live in ghettos, isolated, which gives them little chance to learn the codes of their new country. Their French-born children often grow up feeling like second-class citizens.

But it’s not just society that fails kids like Mohamed Merah. “His dad failed him when he abandoned the family,” Latifa says. “His mom too — she remarried and placed him up in foster care.”

Latifa sums up what came next in his life: Merah dropped out of school, committed some petty crimes and landed in jail. That’s where he met radical Muslims and, as Latifa describes it, “turned into a monster.”

After the shootings, kids in the suburbs made him the poster child of a lost generation.

Latifa recounts her visit to the neighborhood where Merah grew up, only days after the death of her son and that of the self-style jihadist killed at the end of a 30-hour siege with police.

“I saw a group of young people hanging out on the street,” Latifa says. “I walked up to them and asked: ‘Do you know where Merah lived?’ One of them smiled and said, ‘Ma’am, Mohamed Merah is a martyr! He's a hero of Islam! He’s brought France to its knees.’ 'Dear God,' I thought. When I heard that, it was like my son was killed a second time.

Latifa says the guys were stunned and ashamed. They stood up, circled around her and kept saying they were sorry.

She was looking for clues about the killer, and instead found a new quest. Latifa realized she had to get the other side of the story out — hers and that of the wide majority of immigrants and French-born Muslims who make it in France, live in peace and serve their country, like her own son did. That’s the future.

She wants those role models for the teenagers in the audience, a lot of them first-generation French.

She talks about school, religion, family, and manages to get through to them. At the end, teenage boys come to hug her. A girl bursts into tears, saying Latifa reminds her of her own mother.

It’s the second time this year Latifa pays them a visit. The school district is the most impoverished in the region, with up to 70 percent of students on public aid. Fabien Maerten, the principal of Middle School Pierre and Marie Curie, says the first time she came, last winter, Latifa was a bit like a firefighter called to the rescue.

“There was some tension here after the Charlie Hebdo attack,” he says. “About 50 students refused to do the minute of silence the day after. Some lashed out and said things we couldn’t tolerate. Her visit helped us bridge the gap and rebuild a dialogue.”

The school has come a long way since then, he says.

Kids are at peace with who they are: diverse yet unabashedly French.

Before leaving, Latifa asks whether they can sing the national anthem. Every single teenager picks up her tune — a bit off key, but without a fuss.