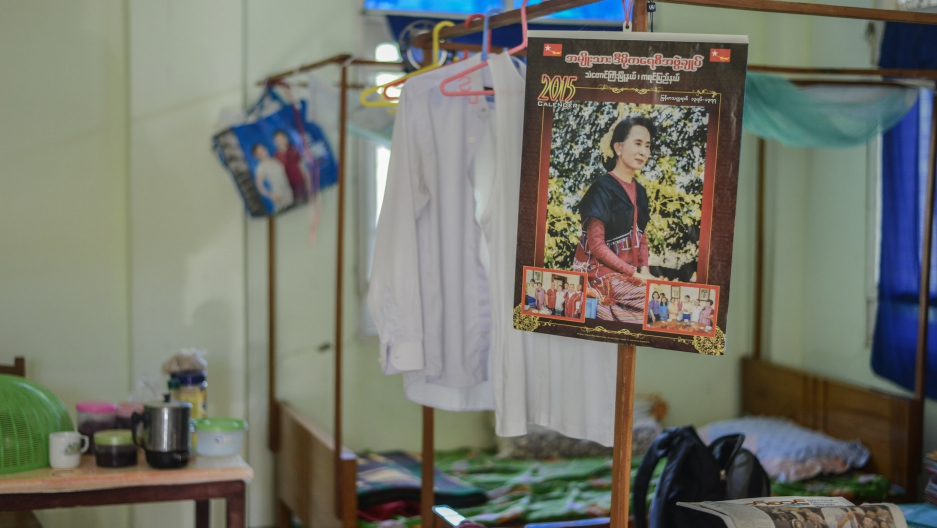 A room occupied by U Kyaw Min, who represents the NLD in Myanmar's lower house of parliament.
Credit: Aung Naing Soe
Share

NAYPYIDAW, Myanmar — When Myanmar’s parliament is in session, lower-house MP Sai Win Khaing lives in a cramped room in the capital, Naypyidaw.

In Burmese, Naypyidaw means “the abode of kings.” But there is nothing regal about this abode. Two small bed frames, one ceiling fan, an air-conditioning unit and one bathroom. A laptop sits on a desk. Wire screens cover the windows. “I am living here alone,” said the cheery 48-year-old from the ethnic minority Shan Nationalities Democratic Party, wearing a T-shirt tucked into a traditional longyi and sitting cross-legged on his mattress.

Only a few of the hundreds of lawmakers in Myanmar’s upper and lower houses are from areas near Naypyidaw, the grandiose capital built from scratch in 2005 by the former military junta and known as one of the most boring cities in Asia.

More from GlobalPost: Myanmar's army is backing militias that make a fortune off of meth

Commuting isn’t an option so, for the two and a half months at a time when parliament is session, the out-of-towners need a place to stay.

The military-backed Union Solidarity and Development Party, which was thrown out of power in November elections, provides rooms for its MPs at headquarters in the capital. Aung San Suu Kyi, the president of the National League for Democracy, which won the overwhelming majority of seats in the recent vote, lives in her own house.

Everyone else is stuck here, at Si Bin Guest House No. 2, a tranquil but shabby complex of light-green row homes set amid tree-lined streets. Buses shuttle lawmakers to parliament and fetch them back at the end of the day. Colored stickers pasted to the front doors are the only way to tell who belongs to which party.

Here we have a member of the NLD.

When I visited on a recent Saturday, it was so quiet I could only hear birds chirping and the occasional murmur of a radio. It was the middle of the day. Lawmakers were taking naps or relaxing in their rooms. Laundry was drying on clotheslines outside.

This was a few weeks after the Nov. 8 poll, when Aung San Suu Kyi’s NLD won nearly 80 percent of the vote. Naypyidaw was built by the junta, but the opposition was about to get the keys to the castle. I walked around the grounds accompanied by a Burmese journalist. We knocked on doors and asked questions about the transition, part of which would play out right here. Unless the NLD finds alternative housing, the ongoing final session of parliament will also mark the last days of political diversity at Si Bin Guest House No. 2.

“I will be a normal civilian after January 31,” he said, referring to the end of the parliamentary term. “I will have no power.”

More from GlobalPost: How Myanmar's ruling party tried (and failed) to win voters

He was first elected in 2010, and was used to the routine of spending his days in Naypyidaw. He didn’t say so explicitly, but he sounded like he would miss this place.

“When I arrived in Naypyidaw, it was not a good place to live. And it was also difficult for eating and living here,” he said. “But later, it got better to live here [and] even the natural environment is good. I think Naypyidaw is a better place to focus on politics than Yangon.” The NLD is coming to the “abode of kings” en masse. Before the election, the party had just over 40 seats in the combined upper and lower houses. When they swear in early next year, they will have 390, out of a total of 664.

U Kyaw Min, an NLD member of the lower house, seemed a little anxious about the arrival of so many fellow party lawmakers. Until now, he had the space to himself. Would he have to — gulp — share?

“Now we have our own separate rooms in this dormitory,” he said, adding that he was “worried” about things getting a little too crowded.

He had a calendar on his wall with a photo of Aung San Suu Kyi. Laundry was strewn about. Stacks of newspapers lay on the bed. I sympathized. Living here, I wouldn’t want a roommate either.

Joe Freeman is a Yangon-based journalist and an editor at Coconuts Media. Follow him on Twitter at @joefree215.