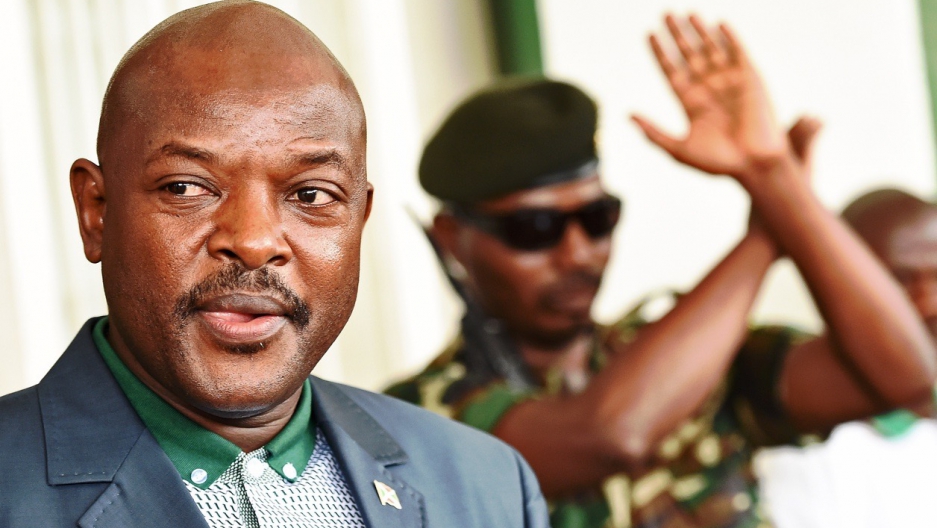 Burundi President Pierre Nkurunziza at the president's office in Bujumbura on May 17, 2015.
Share

JOHANNESBURG, South Africa — Burundi’s government calls it an “invasion force.” But after months of spiraling violence in that country, the African Union has said it will send in peacekeepers, whether Burundi's leaders want it or not.

The situation in the capital, Bujumbura, has devolved into nightly attacks with bodies appearing on the streets almost every morning. Hundreds of people have been killed in recent months, in a continuing crisis that began in April when President Pierre Nkurunziza announced plans to stand for a third term, leading to street protests and an attempted coup.

The AU, which represents 54 member states on the continent, wants to send a 5,000-strong peacekeeping force to Burundi. Dubbed “MAPROBU,” which is the French acronym for the Prevention and Protection Mission in Burundi, it would have a renewable mandate of six months.

The UN Security Council has “urged all Burundian stakeholders to fully cooperate” with MAPROBU. The US State Department, in a daily briefing, said that it supports the AU mission and had similarly urged Burundi to accept the peacekeepers.

But on Tuesday, Burundi’s National Security Council (NSC) — which includes the president, ministers and security chiefs — rejected the AU proposal. A day earlier, parliament had also rejected the plan, dubbing it an “invasion force.”

Burundi, which gained independence from Belgium in 1962, went through decades of coups and ethnic conflict. This was followed by a 12-year civil war in which 300,000 people died in fighting between the minority Tutsi-dominated army and predominately Hutu rebel groups.

Despite opposition, Nkurunziza won a third term in July, in violation of the country’s constitution as well as the Arusha Accords, a peace deal brokered by Nelson Mandela that ended civil war and led to elections in 2005.​

The crisis has forced more than 220,000 refugees to flee Burundi, many of them to neighboring Tanzania, according to the group Refugees International. More than half of them are female, and many experienced gender-based violence while fleeing to safety.

In the worst of the violence, at least 87 people were killed Dec. 11 during attacks against military installations in Bujumbura, and in summary executions that followed.

“In the single most deadly day since the current political unrest began, the streets of Bujumbura were left littered with bodies, many shot with a single bullet to the head,” said Muthoni Wanyeki, a regional director for Amnesty.

“The security forces’ violent tactics that day represented a dramatic escalation in scale and intensity from previous operations," Wanyeki said in a statement. "Men were dragged out of their homes and shot at close range, while others were shot the instant their doors were opened.”