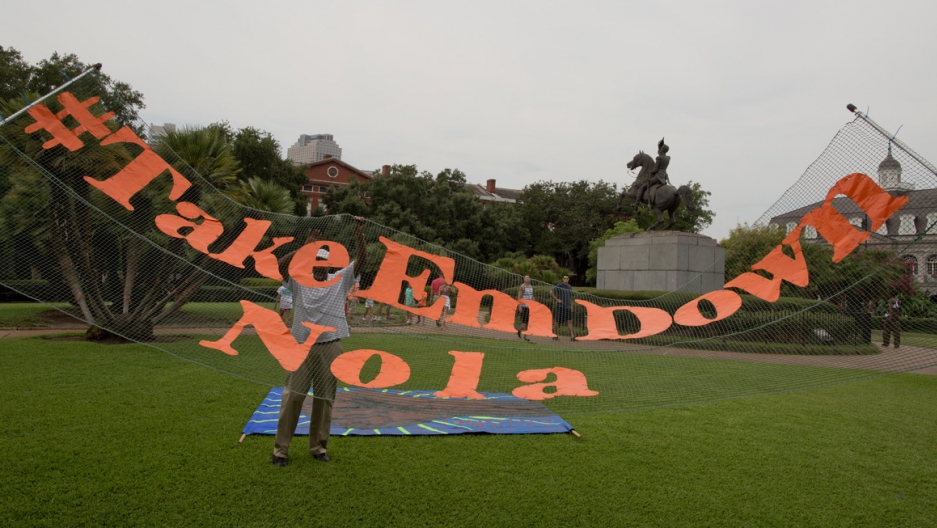 New Orleans held emotional hearings over the summer about a plan to remove its Confederate monuments. Last week, the City Council voted to take four of them down.

When it comes to race in America, this has been a year like no other in recent memory, and it can be hard to pull back and get perspective on it.

Sometimes you can do that by talking to outsiders looking at America's tortured history on slavery and race.

But what if you could get an insider's outside perspective on the issue?

That's what Roopa Gogineni and Mike Onyiego set out to do. They are both American journalists based in Kenya who cover civil conflicts in places like Sudan and Somalia. And they decided to look at the lingering impact of America's Civil War in the South for the podcast Us and Them; the story is called "A Confederate Reckoning."

The idea, as Onyiego put it, was "let's keep our foreign correspondents hats on and try to go do down there and see something different about it. Maybe an outside perspective might lend some insights."

Making it a little more complicated, Onyiego is an African American from Chicago, and Gogineni is Indian-American, from West Virginia. And they went to New Orleans to discuss some highly charged topics.  "Sometimes the conversations got awkward, uncomfortable," Onyiego says.

But they point out that many people were eager to talk to them.

At a rally of hosted by the Sons of Confederate Veterans, one man told them that slavery wasn't as bad as people make out now. "My family owned slaves," he said. "They stayed with my family until the 1950s, they took on my family's name. They loved the family, they were treated as family."

One day, in the middle of a long conversation about race and slavery in a bar, a man from Mozambique joined in — and he had his own outside perspective.

When Gogineni asked him how people in Mozambique talked about their civil war, he said they don't, because it would bring up too much pain and sadness. Then he went on to say that black people in America need to let go of their resentment.

"Most of the black people here, they're part of the problem because all they do just complain. It's like, OK, what's done wasn't fair. But what are you going to do? You're going to go back to the past and change it?"

For Onyiego, it was a frustrating moment because he says it's rare to have a real discussion about the long-term impact of slavery here. "So for someone from Africa to be given such instant credibility to allow people to move past some really unresolved issues, it wasn't fair," he says. "It was traumatic to have that conversation end so abruptly."

It says something about how complicated these histories and symbols can be for outsiders, Gogineni says. She describes how her father, an immigrant from India who moved to the United States and settled in West Virginia, bought a Confederate flag vanity license plate for his car.

"He had no idea what it meant," she says. "He thought it looked really nice, that it was some take on the British flag. And then eventually a friend of his said why are you, a brown man, driving with this Confederate flag on your car? And he connected the dots for him."

But at least people are talking about all of this now, Onyiego says. People are starting to say, let's have the whole discussion about the Civil War.

"The conversation is definitely happening, and it feels messy," Gogineni adds. "But it feels like progress because people are in the same room."

Over the summer when she and Onyiego were in New Orleans, they attended contentious hearings on a proposal to remove some of New Orleans' most prominent Confederate monuments — such as the statue of Robert E. Lee in Lee Circle.

Last week, the New Orleans City Council voted 6 to 1 to take down that statue and three other monuments. The decision is being challenged in court.