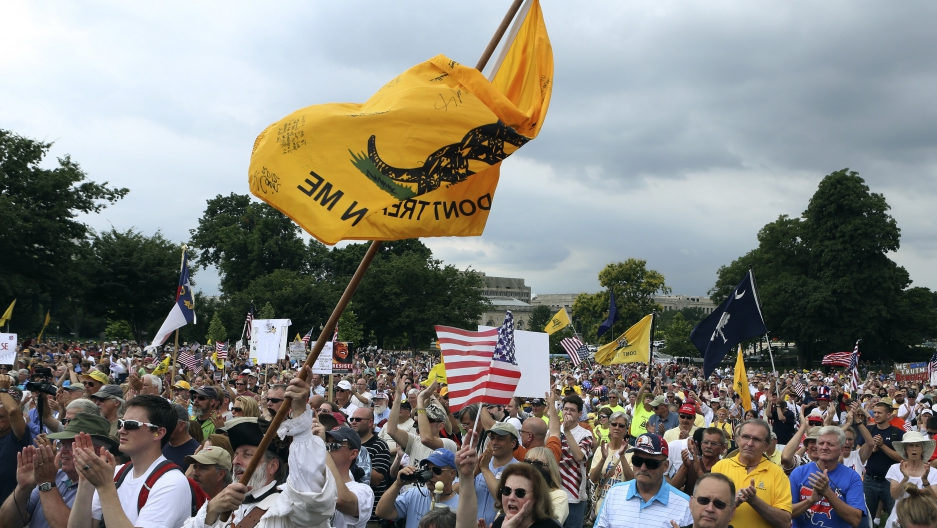 The crowd cheers during a Tea Party rally to "Audit the IRS" in front of the U.S. Capitol in Washington June 19, 2013
Credit:

Two-and-a-half years after the Internal Revenue Service apologized for using "inappropriate criteria" to scrutinize tea party-aligned nonprofits applying for tax-exempt status, President Barack Obama has signed into law a new measure that makes it easier for nonprofit groups to receive a tax break — or sue the agency to avoid legal limbo.

Such groups have proliferated in recent years and become increasingly active in elections in the wake of the U.S. Supreme Court’s 2010 decision in Citizens United v. Federal Election Commission.

These nonprofits, many of which are organized under section 501(c)(4) of the tax code, need not publicly disclose their donors. And their primary purpose must be the "promotion of social welfare,” not electoral politics.

More than 100 groups seeking tax-exempt recognition that were deemed to be potentially political by the IRS waited more than a year for answers from the agency, according to a May 2013 report by the Treasury Inspector General for Tax Administration.

Yet long waits and legal uncertainty did not keep some well-financed groups from being heavily involved in elections — and pushing the legal limits.

In response, many campaign finance reform advocates have called for the IRS to develop new rules clarifying the degree to which nonprofits may be involved in politics. But the new spending bill signed by Obama prohibits the IRS from issuing new rules while giving groups themselves more recourse.

Dan Backer, a Republican attorney specializing in campaign finance and tax law issues, called the development "fantastic" and predicted the tax-exempt application process would be "much faster" now for groups organized under section 501(c)(4) of the tax code.

Previously, only charities organized under section 501(c)(3) of the tax code had the ability to take the IRS to court to force a determination — or to appeal the IRS' decision about whether they should receive tax-exempt status.

Now all groups organized under section 501(c) — including charities, "social welfare" organizations, labor unions and trade associations — can sue the IRS if the agency doesn't issue a determination within 270 days.

Several conservative groups identified in the inspector general’s report had waited more than 1,000 days for the IRS to take action. Because of the long waits and intensive questioning, some withdrew their applications to for tax-exempt status.

Jan Witold Baran, head of the political law practice at the Washington, D.C.-based firm Wiley Rein, said the change will make suing the IRS "much easier and also much cheaper."

This legislative language was first introduced by Sen. Dan Coats, R-Indiana, in 2014. It was included in the 233-page tax extenders bill passed by Congress last week and was incorporated into the 2,000-plus page omnibus spending bill signed by Obama on Friday.

Reached by the Center for Public Integrity, a spokesman for Coats could not immediately comment. But in a 2015 press release, Coats praised his bill for providing "a much-needed avenue of relief for nonprofits whose applications for tax-exempt status are languishing at the IRS."

Deep-pocketed 501(c)(4) “social welfare” nonprofits have been among those taking advantage of the decision, spending millions of dollars to support their preferred candidates even though the “primary purpose” of such groups can’t be electoral politics.

For instance, Crossroads GPS, which was launched, in part, by veteran Republican political strategist Karl Rove, has spent more than $110 million on advertisements calling for the election or defeat of candidates since its creation in 2010. To date, its application for tax-exempt status as a "social welfare" nonprofit has neither been approved nor denied by the IRS.

The consumer interest group Public Citizen filed a complaint with the FEC alleging that Crossroads GPS was violating the law and should have registered as a political committee rather than a "social welfare" nonprofit. Political committees are required to disclose their funders.

An investigation by the FEC's office of general counsel that was recently made public determined that Crossroads GPS likely broke the law. But a majority of the six-member commission — which is comprised of three Democratic-aligned commissions and three Republicans — could not reach an agreement on the case.

Similarly, a group called Freedom Path — which, likewise, has not been officially recognized as a 501(c)(4) by the IRS — spent more than $1 million on messages designed to help boost Republican Sen. Orrin Hatch of Utah during his contentious 2012 primary fight.

The Center for Public Integrity later revealed that Freedom Path received $750,000 in seed money from the trade group Pharmaceutical Research and Manufacturers of America.

The pro-Hatch group has already sued the IRS — not for its indecision but rather for prematurely releasing its application for tax-exempt status to the nonprofit journalism organization ProPublica. In that document, Freedom Path told the IRS it did not plan to participate in elections.

Records show the IRS has only rejected the applications of 501(c)(4) groups a handful of times for being too focused on partisan politics.

The liberal group Arkansans for Common Sense was one such organization.

In 2010, Arkansas for Common Sense spent about $1.3 million, mostly on ads designed to aid Sen. Blanche Lincoln, D-Arkansas, who fended off a primary challenge that year but ultimately lost her seat to Republican John Boozman.

Its application for tax-exempt status was rejected by the IRS in 2014.

The new law signed by Obama on Friday will also prohibit IRS employees from using personal email accounts to conduct official business and bar the agency from imposing the gift tax on contributions made to 501(c)(4) nonprofit groups.

It further requires groups formed under section 501(c)(4) to notify the IRS of their existence, something they weren't previously required to do.

Though many such groups choose to file official applications for IRS approval, they weren't required to. IRS recognition gives them legal certainty with regard to their tax status.

The new law requires new 501(c)(4) nonprofits to provide notice of their creation to the IRS within 60 days or pay a penalty.

Jason Torchinsky, a lawyer whose clients include Freedom Path, said the impact of the changes won't be entirely clear until the IRS writes regulations explaining how they will be put into practice.

But he called the notice provision "significant” because “it's new and it changes current practice."

Other tax lawyers and campaign finance reform advocates had been hoping that the IRS would, in 2016, issue updated guidance to 501(c)(4) nonprofits regarding the degree to which they may engage in electoral politics.

They have called for new bright lines about spending rules, rather than the current practice of relying on the "facts and circumstances" on a case-by-case basis.

However, a separate provision in the omnibus spending bill prohibits the IRS from spending money to implement any new rules concerning nonprofits' politicking.

Greg Colvin, a San Francisco-based lawyer affiliated with Public Citizen’s Bright Lines Project, said the new measures mean “we’re stuck with a very difficult system” and an “unstable status quo” in which “those who want to push the envelope can as much as they want to.”

Philip Hackney, an assistant professor at Louisiana State University Law Center who formerly worked at the IRS’ office of the chief counsel, said the new provisions, especially the freeze on new rules, show that “Congress is expressing that it does not trust the IRS.”

"We are making strides in getting and keeping the IRS out of the speech policing business," said Republican lawyer Cleta Mitchell, who represents many of the tea party groups scrutinized by the IRS. "There is more to do next year, but this is a big step in the right direction."