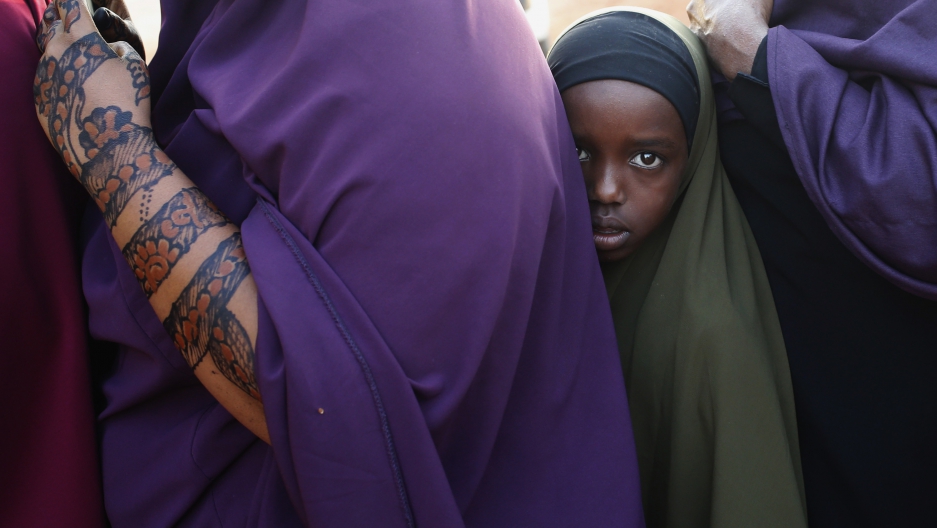 A girl stands in line in front of a bus with other passengers traveling to Nairobi.  They are in the town of Mandera at the Kenya-Somalia border where terrorist group al-Shabab has launched attacks against non-Muslims.

The passengers were traveling from Nairobi to the northeastern town of Mandera, near the border with Somalia, when the militants started shooting at the bus.

The attackers were trying to separate the Muslims from the Christians, intending to kill the non-Muslims.

They said, "those who are Muslims... This side. Those who are non-Muslims, this side," says the BBC's Bashkas Jugsodaay, who spoke with some of the passengers and employees of the bus.

He says he was told that the Muslims told the militants, "no. You're not going to separate us. Whatever you're going to do, do it to all of us here, otherwise we cannot be separated."

This is the first time, says Jugsodaay, the people are trying to resist.

"People are somehow fed up. They're saying to al-Shabab that they cannot take this anymore. And they're also sending a message to the Kenyan government, who are supposed to protect the Kenyan people."

This isn't the first time the militant group has targeted Christians. In April, the group killed around 150 people, after being asked if they were Christians or Muslim.

In late 2014, the militants killed 28 non-Muslims who were traveling on a bus to Nairobi for the Christmas holidays. The terrorists sorted the passengers into two groups based on their religious affiliation.

Al-Shabab, based in Somalia, has been at war with Kenya ever since security forces went into Somalia to battle extremists.