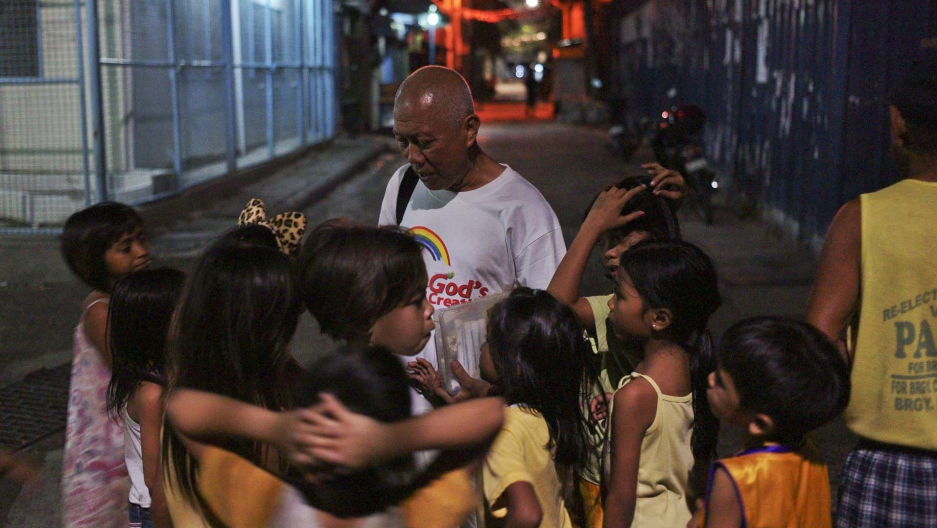 Brother Paul heads out at night with baggies filled with biscuits for kids, and medicines for adults with HIV. He also distributes clean needles and condoms to those in need.

Paul Bongcaras is a Catholic monk of the order of the Society of the Divine Word, in Cebu City, Philippines. He spends his days living an ascetic life in a Catholic seminary.

His nights, however, are spent among sinners.

Bongcaras’ seminary, of arched doorways and cloistered courtyards, faces one of the city’s most notorious slums, and every evening Bongcaras walks among the drug addicts and prostitutes who call the slum home.

Far from being outside his element, Brother Paul, as everyone here calls him, moves with ease and is greeted warmly by the residents. He chats with old women sitting on wobbly wooden benches and pats the heads of half-dressed kids.

Almost immediately, he is surrounded by sex workers on break and rangy young men, the tracks and blackened veins of intravenous drug addiction evident on their inner arms.

“Brother Paul,” one greets him from the far end of a crumbling cement path. “Thank God you’re here!”

Bongcaras, 69, has close-cropped white hair and is dressed simply in shorts and flip-flops. On one shoulder, he carries a ragged nylon bag stuffed with medicines. There’s acetaminophen and vitamins tied up in little plastic bags, amoxicillin for deworming, tubes of ointment for rashes, as well as red boxes of condoms for sex workers and pills to treat STDs.

Around the world, new HIV infections are on the decline. And in the Philippines, the number of people with HIV remains low, about 25,000 individual cases, or less than 0.1 percent of the population.

However, the World Health Organization is sounding the alarm because of how quickly the virus is spreading. About 80 percent of those with HIV became infected in the past five years. The WHO says the Philippines now has the fastest growing HIV epidemic in the world.

The neighborhood where Bongcaras works has one of the highest rates of HIV in the country. Tucked deep inside the slum are “shooting galleries,” little more than plywood shacks, where for a penny an intravenous drug user can crouch against a wall, shoot up, and drift into a narcotic stupor. The ground is littered with used syringes. And people share needles.

It’s considered a public health emergency, but the Philippine health system lost an effective tool for stemming the spread of HIV when the Senate blocked a pilot program for needle exchange earlier this year, on the grounds that it encourages drug use — despite much evidence to the contrary. Health officials fought back, arguing that ending needle distribution would lead to more cases of HIV. But they lost.

But Brother Paul says you have to keep trying. Within half an hour he gives away all the condoms he brought with him.

When he gives condoms to a sex worker, he’s doing it in defiance of the highly conservative Philippine Catholic Church — his church. And if he gives an infected drug user a clean needle, he’s breaking the law.

Bongcaras says he’s dedicated to what he considers his vocation: to help the poor. “We made a decision because we are in the front line. We saw the need.”

The Catholic hierarchy in the Philippines, however, struggles to reconcile its firm stance against contraception with the urgent need for condoms.

“When questions come in from the hierarchy, we just do not entertain [them],” Bongcaras says.

Much of what’s contributing to the spread of HIV in the Philippines isn’t a lack of information. People here generally know how the infection is spread. The problem is stigma. Discussions about HIV and AIDS are conducted in whispers. Fear of being ostracized by society leads to avoidance. Those at risk of contracting HIV put off getting tested, and those with HIV are reluctant to access health care for fear of what might happen to them if people found out.

The rumors that swirl around this neighborhood are evidence of that. One woman, who is HIV positive, told me through tears that people with AIDS are carted off to a faraway place where all AIDS patients are left to die. Upon death their bodies would be immediately incinerated, a particularly horrifying prospect in the Philippines, where families show their love of the dead through elaborate, open-casket funeral rites that last seven days. Facing death, she longed at least for a proper burial.

Aside from the medicine, Brother Paul offers acceptance. He doesn’t just hand out pills; he’s friends with the people here, despite the fact that as sex workers and drug addicts, they’re far from being model Catholics.

When I ask him if he struggles not to judge them for their sins, he doesn’t skip a beat: “This one, no. It's easier to have no judgment than to judge.”

“Isn’t that right?” Brother Paul says to a drug addict standing with him. “No judgments, no problems. It’s when you judge that you run into problems.” The two of them share a laugh.

The Philippine epidemic is currently concentrated in specific groups — IV drug users and men who have sex with men. But it’s expected to spread. While the government figures out how to deal with the growing epidemic, Brother Paul continues his nightly distributions, one condom — and one clean syringe — at a time.

Ana Santos helped in the reporting. The story was funded with a travel grant from the Pulitzer Center on Crisis Reporting.