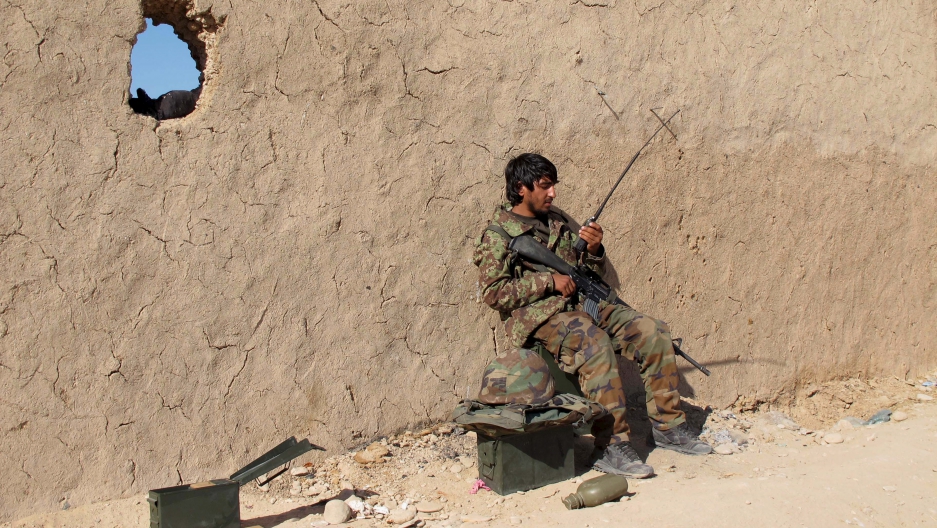 An Afghan National Army (ANA) soldier speaks on a radio at an outpost in Helmand province, December 20, 2015.

It might seem like the war in Afghanistan is over. Most of our troops are back from Afghanistan. Not all, but most.

And yesterday there was a tragic reminder of the troops still there when six Americans were killed in a Taliban suicide attack.

No, the war is not over.

Afghan forces are now taking the lead in the fight against the Taliban. And that fight is not going well, to be honest. Taliban fighters have been gaining ground lately.

This week, we've seen that in Sangin. It's a district of Helmand province, in southern Afghanistan. The Taliban claim they're in control of Sangin. But the fighting continues. They surrounded government troops and buildings. Like I said before, the war in Afghanistan is not over.

"The Taliban have been making progress in Helmand province," says Auliya Atrafi with BBC Pashto.

The Taliban run the show. They oversea the production, including taxing and transport. "It's providing a good opportunity for the locals," he says. "And that might be one of the reasons why the Taliban get support in the countryside. The Taliban are encouraging the production of opium."

The government in Kabul understands the connection between violence and the opium trade. But the people are losing faith the government will be able to do anything about it.

Atrafi recalls a story that succinctly sums up the problems in Afghanistan.

"I remember sitting on the banks of the River Helmand and young people would be talking about their future. But now these guys are talking about how to escape. But they reach the conclusion that they can't really leave the city because they are no longer single men. They have families. They have houses, properties, and businesses."

They stay. That means they have to work within a broken system. "Everything here is working through a chain of taking bribes and giving bribes. If you're not willing to be part of that chain, you need to get out of the way because you are disrupting the flow of how things are working. It is extremely frustrating."