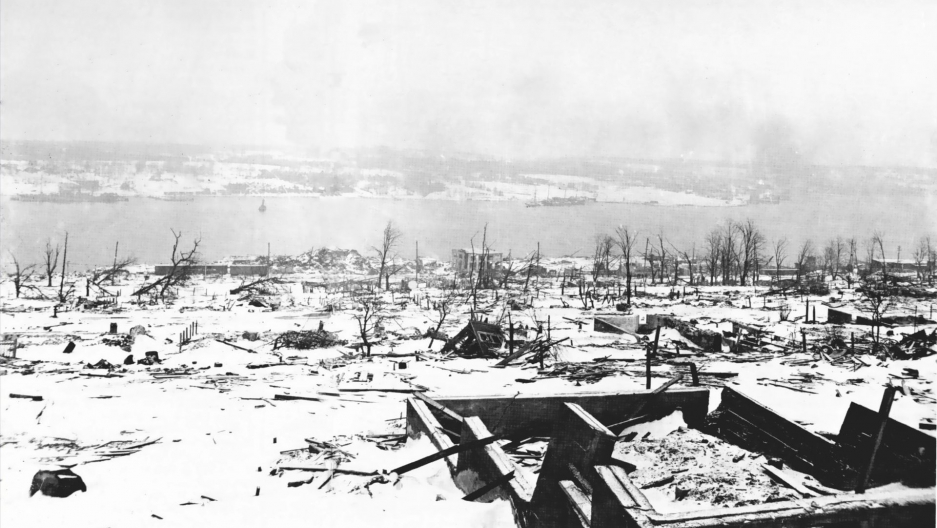 A view across the devastated city of Halifax, Nova Scotia after the Halifax Explosion, looking toward the harbor. The steamship Imo, one of the ships in the collision that triggered the explosion can be seen aground on the far side of the harbor - Halifax after 6th December 1917.

If you were walking around Halifax, Nova Scotia, on this day back in 1917, you'd have been among the lucky ones.

A massive explosion on the waterfront had rocked the city on December 6, 1917. The event is recorded in photographs, letters and documents at the Nova Scotia Archives.

So, it turns out, is the generosity of thousands of strangers.

“A few seconds before 9:05 a.m., the Mont Blanc, carrying 2,500 tons of high explosives and with a deck-load of monochlorobenzene, blew up, shattering the 3,000-ton vessel and spewing destruction over 325 acres. The explosion killed more than 1,600 people instantly and injured over 9,000 others, in a metropolitan area of 65,000 people. More Nova Scotians were killed in the explosion than were killed in World War I. The catastrophe resulted in over $35,000,000 damage.” 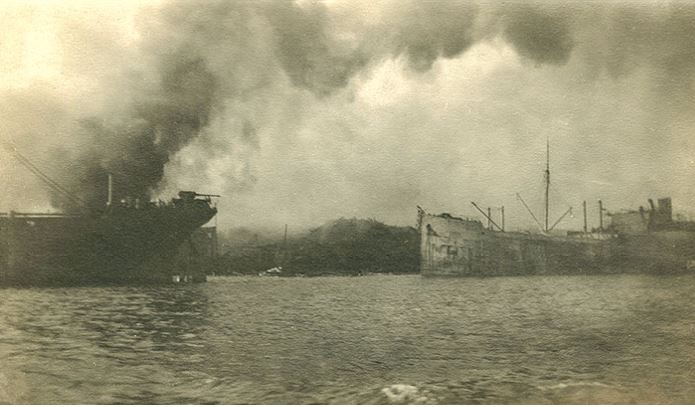 Ships in the harbour after the Halifax Explosion 1917

Historians note it was the most powerful manmade explosion until the atomic bomb in 1945. The huge explosion and fireball leveled the north end of the city. Debris from the blast was thrown in a radius of four miles, says Blair Beed, a local historian in Halifax.

“It would've been a clear day but there are piles of wreckage covered in snow. After the explosion a severe snowstorm came and covered everything so what was wreckage may just look like piles of snow, and you would've seen that all the windows had been all boarded up, because the windows shattered for miles around Halifax … they would've still been looking for lost children, lost parents, and they didn't actually find the last body from the explosion till year later when we were moving debris inside an exhibition building.”

The blast was only part of the problem as fires broke out, says Beed, “The wind force of the explosion knocked in houses that were heated by wood and coal burning stoves, and those buildings burned for 12 days on the material that was in them.” 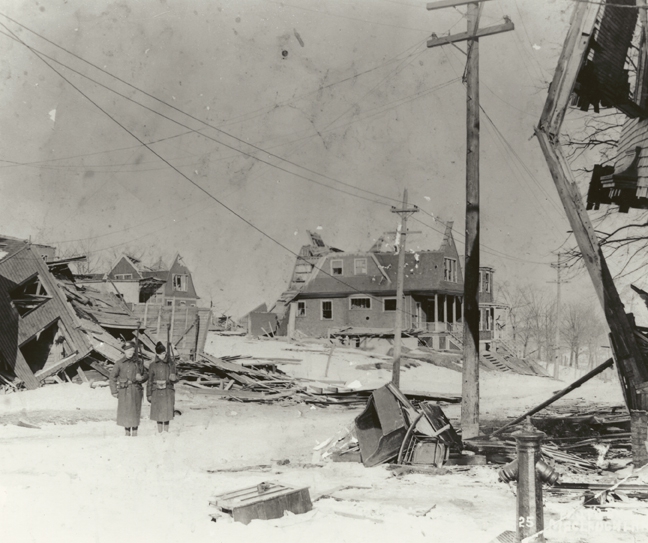 Schools, churches, factories and private homes were swept away by the force of the Halifax explosion, 1917

Among the first responders (the term hadn’t been coined yet) to the Halifax Explosion included the naval crews of the American, British and Canadian ships that were anchored in the harbor.

“The emergency message on the telegraph brought trainloads of people from surrounding villages and towns in Nova Scotia, from the Maritime province, but the message sent out was actually received the same day by the governor of Massachusetts and within 2 days the Americans arrived.”

The doctors and volunteers from Boston that arrived to help out soon began sending letters home (newly exhibited at the Nova Scotia Archives) describing the spectacle.

One volunteer named Chester Brown was helping with relief and giving out money. He wrote that he “waited on one man in the office yesterday, paid him a money order for 100 dollars, and when I asked for identification, he said he had nothing."

"He lost everything. He lost a wife and five children and a new home and his wife was in a condition to have another child in the near future. He had three boys killed in France since the war started, and the story he told would bring tears to the eyes of the most hardened.”

Beed had two grandmothers who survived the Halifax Explosion. One had just celebrated her 16th birthday.

“She was close to the explosion and tried to help at a local hospital, but as she described it people had parts falling off of them and she could not take it and had to run away.” 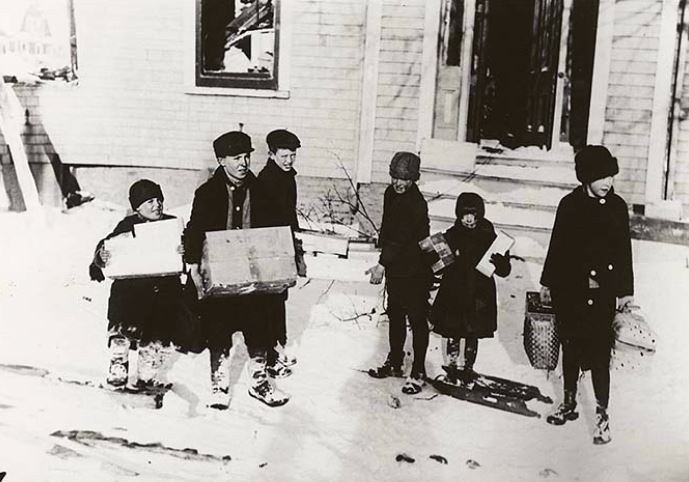 Children getting food from a relief station, Halifax, December 1917

As painful as the memories of those days are, the history does serve a source of strength as well for Nova Scotians, says Beed.

“People talk about being brought up in houses where as children they had to be very quiet because people’s nerves were bad, or they couldn’t move the furniture because people were blinded and couldn't see around the house so you couldn’t move anything, so children growing up had a restricted lifestyle in Halifax. As I grew up I would've seen children of the explosion who were really injured with great deformities in their faces from flying glass and debris. It sort of is our story and it's a big story of Canada.”

Nova Scotia hasn’t forgotten the generosity of the volunteers and doctors from Boston who rushed to the scene to help in 1917.

“Nova Scotia started in 1971 to send a Christmas tree to Boston because they were our ‘first responders,’ they were the outside, organized medical relief. They set up the actual hospitals in Halifax to help the 9,000 injured people, and as many survivors would've said, they survived in Halifax on the food and goods sent from United States and this is her 'Thank you' back to the principal city that started the efforts to get relief to Halifax.”

The city had been preparing for Christmas before explosion and its aftermath.

“People actually lost many things they had prepared in their homes laying on the table that day wrapping up for the soldiers over in the battlefields of France. With the devastation all around, a little girl wrote a letter saying that one of the things she wanted was dolls to replace the ones killed in the explosion.

"So across North America the newspaper said, ‘Let's have the children of Halifax have a Christmas, and so not only Nova Scotia, but it was really the United States who sent Christmas goods for injured children who are seen in photographs standing in front of trees with meager decorations but holding onto little trinkets and dollies, and things that were sent from United States. They wanted them to have a happy Christmas.”