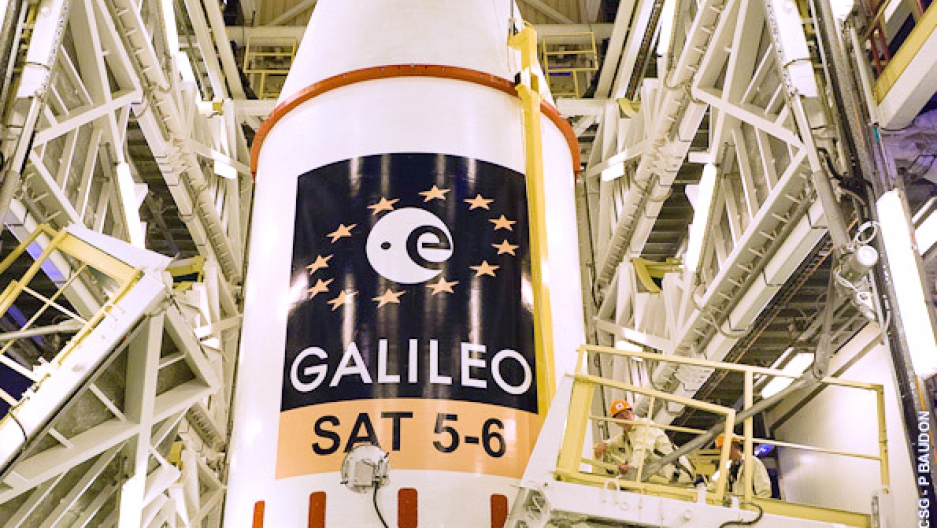 Gailileo 5-6 satellites placed on top of their Soyuz launcher at the top of its mobile gantry on the evening of August 19, 2014.

Their elongated orbits made them inoperable for the ESA’s global-navigation system, but a group of researchers have repurposed the satellites to test an aspect of Einstein’s theory of general relativity.

"They were supposed to go in a circular orbit, but now they go in an eccentric orbit," says experimental physicist Sven Herrmann. "And that gives us an excellent opportunity to test ... a very basic prediction of general relativity. That clock [on board the satellite] that is closer to a massive object like Earth will seem to tick a bit more slowly than a clock that is located further away. And the clocks on board those satellites, they are now doing exactly this. They are approaching Earth and going back and forth with every revolution on the orbits that they do about twice a day."

The clocks on board the satellites are, according to Herrmann, "Pretty good clocks. They are maybe not the world's best clocks, but they are designed for the purpose of positioning and navigation. And I think they are sufficient for the test that we want to do."

If all goes well with the experiment, Hermann predicts that the clocks on board the satellites will shift on the order of microseconds as they circle the earth — a shift that would back up Einstein's theory.

The satellite experiment will last at least a year, enough time to rule out any systematic errors.

"This general relativity is just such a very basic theory. It's essentially defining our understanding of space and time. So it's a very basic [theory] of physics that I think we are obliged really to test to the best of what technology can provide us with," Herrmann says. "Especially if you look at the problem that is something many physicists try to tackle today — the unification of gravity theory that's General Relativity and Quantum Theory on the other hand. They're two big theories in physics that are seemingly incompatible."