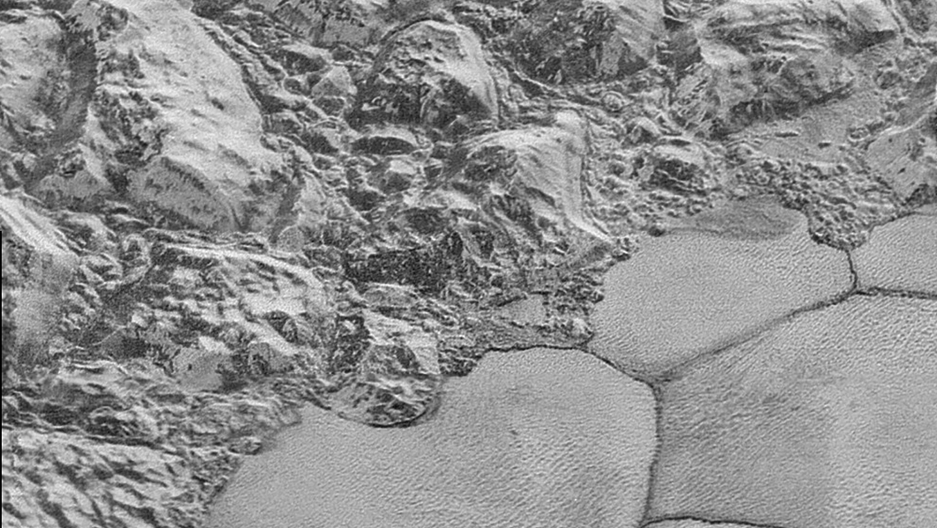 “This is the apex, these are the highest resolution images,” says planetary scientist William McKinnon, who is New Horizons' deputy lead for geology, geophysics and imaging. He and his team have recently received a new batch of photos from the outer reaches of our solar system, and they’re beginning to theorize about what the images might reveal from Pluto’s history

“You can see all sorts of amazing details,” McKinnon says. “You can see the layers on the sheer faces of the mountains. You can see how they're jammed together like logs at a dam and they look like they've actually crushed smaller mountains and pieces of ice in between them. It speaks to some sort of really ancient cataclysm on Pluto.”

Some guesses include a large impact or grand-scale planetary evolution. They’re all in agreement, however, that Pluto is still active.

“[That] of course is one of the great findings of the whole mission — that we can travel to the ends of the solar system where the sunlight is very feeble and the surface temperature is very low and we still see stuff happening just like it’s, you know, Earth or Mars.”

Some of the photos from Pluto seem to show a sort of shoreline with one material crashing into another, creating a ripple-like surface. McKinnon says materials like water and ice are different in the outer reaches of our solar system.

“It's amazing,” McKinnon says. “All these mountains are jammed together but then they stop and that's where this place, Sputnik Planum, starts and basically it's a giant sheet of exotic ices. Because on Pluto, water-ice is like rock on the earth. And what takes the place then of water vapor, and liquid water, and water-ice is ices of nitrogen, and carbon monoxide, and methane.”

There are many theories as to what might be causing the ripple-like formations in the new photos. Some think it might be wind. Others theorize that the ices may still be volatile. McKinnon says some of Pluto’s exotic ices are likely flowing and behaving similarly to earth’s glaciers.

“Inside the Sputnik Planum we actually see flow of what we call the glacial ices, the solid nitrogen and so forth moving down out of the mountains and flowing onto the plains in that big, big basin,” McKinnon says, “Basically sunlight evaporates nitrogen gas which then condenses elsewhere on the planet and it piles up in a not too different way than snow piles up on the Earth. And it basically makes a glacier and it goes downhill. There's a cycle, and as this happens, it creates some of these fantastic landscapes.”

McKinnon and his team are continuing to receive images from the New Horizons spacecraft and will keep getting color and spectral data on Pluto for at least another year. After that they hope to send their spacecraft off even further into the Kuiper belt.

“It will in effect be the most distant body visited by the human race when we get there in three years,” McKinnon says.