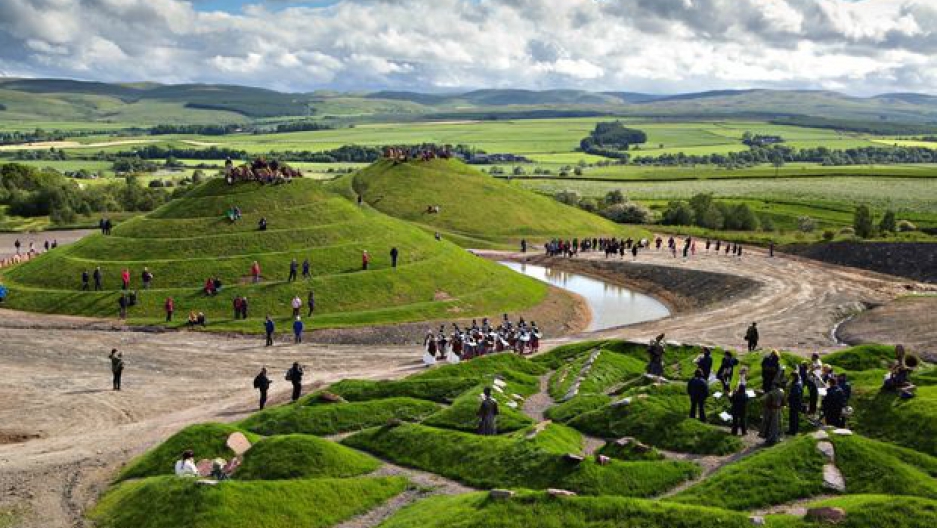 The Crawick Multiverse in Dumfries and Galloway, Scotland

(Courtesy of the Crawick Multiverse)

“The Crawick Multiverse” is a sprawling piece of landscape art tucked into Dumfries and Galloway in the Scottish countryside. Landscape artist Charles Jencks designed it, and earlier this year completed it.

Visitors to the site can walk up a large, grass-covered mound meant to represent the Andromeda Galaxy, or another clean-lined geometric rise meant to represent the Milky Way Galaxy. Other landforms are meant to give form to a Supercluster and comet path and there’s a corkscrew walkway of mudstone representing the whole ensemble of universes — the multiverse.

“Everything about this site shouts cosmic,” says Jencks.

This was not always the case. The site used to hold a coal mine, and seeing it transformed into an art installation seemed appropriate to local poet Rab Wilson.

“This area was decimated economically post the miner's strike and there’s been a a slow death by strangulation for almost 30 years. Perhaps these are the first green shoots that we've really seen. ... So, in a way perhaps, this is a fitting memorial,” says Wilson, who composed a poem in the multiverse's honor. “This is a cosmos distilled to elemental rock and stone depicting that interstellar collision.”

Jencks, who’s American but lives in Scotland, did a lot of research for the landscape project.

“I've been talking to scientists, working with them,” Jencks says, “ And the new theory is our universe is one of several, and the most beautifully balanced of all universes because it produces life and it produces consciousness and it's so sensitive that we have to explain why it's so beautifully balanced…The only way we can explain that scientifically is to say, ‘Well, there must be other universes which are not well balanced.' ... It’s too much of a miracle, you've got to explain it. Scientists don't want to necessarily use God to explain it. They want to say why, how, and the multiverse theory is the one that does that.”

Jencks hopes visitors to his site will get a sense of the multiverse by wandering around and looking for meaning.

“What I've tried to do here is to unpack that idea bit by bit, and root people in the idea,” Jencks says, “When you go into a landscape that you know is meaningful, you look for more meaning, and you find meanings that I never intended. A meaningful landscape is something that leaves the mind on and the imagination on and I think you have to appeal to the brain and the mind in a landscape. That’s what I try to do.”