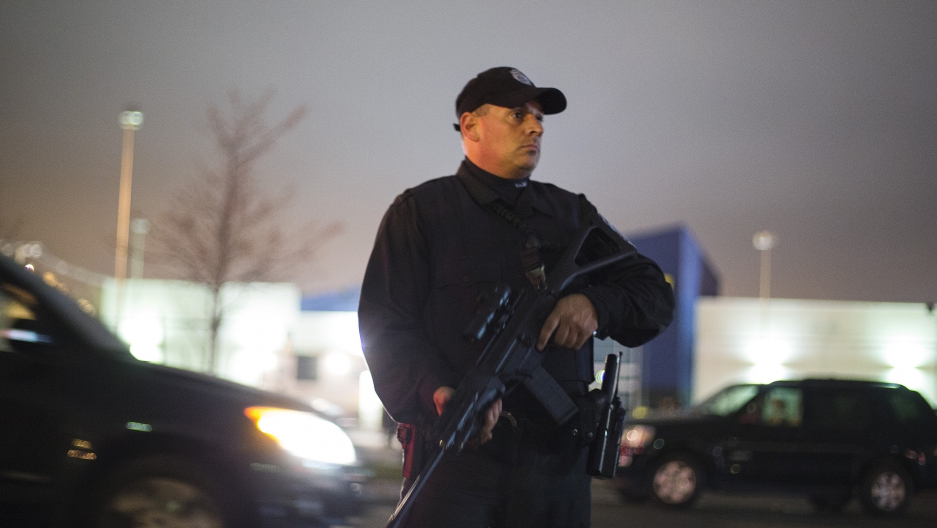 A law enforcement official stands with his rifle during a search for Dzhokhar Tsarnaev in Watertown, Massachusetts on April 19, 2013.

It’s been two weeks ago since terror struck San Bernardino, California. We’ve had two weeks to think about the parallels an earlier terrorist attack, the Boston Marathon bombing and the subsequent shootout in Watertown, Massachusetts in April 2013.

The Tsarnaev brothers engaged police in a firefight that included pipe bombs and then searched long and hard for the surviving terrorist that got away.

When newly appointed Watertown police chief Raymond Dupuis heard that police in San Bernardino were looking for a third killer, his thoughts immediately turned to April 19, 2013.

“What was going through my mind watching the officers going door to door and searching the yards was — after what we went through — did they learn from what we did or what we did or didn’t do.”

At that time, Dupuis was in charge of officers in the field. He says the police response in San Bernardino followed standard operating procedures for searches that echoed efforts in Watertown to contain suspected terrorist Dzhokhar Tsarnaev.

“I thought there was a third person in the neighborhood running around and they were trying to locate them, just like here in Watertown”, he says.

“And I was just watching to see what their next move was — the police — and how they were doing it. It’s pretty much the same: You set up a perimeter and just make sure no one can get out of the perimeter and you set up a search pattern inside.”

But if this was one of the lessons from Watertown, it's not the best example of what went right. Law enforcement officials in this area actually erred in their efforts to find Tsarnaev after he fled the scene of the shootout. He was found outside the search perimeter, 18 hours later, hiding in a dry-docked boat; a fact acknowledged by former Watertown police chief Ed Deveau.

“Looking back, we did a good job. We just missed it by one block of the inside perimeter that we set up. And that was setup in the early morning hours by some of the responding officers from different departments. They did an excellent job, and I think it prevented him from going any further than he did.” Watertown police say that another challenge for them was authenticating fast event-driven information as it came in. In San Bernardino, as police, SWAT teams and the FBI surrounded the disability center, a call came in of a standoff in Pasadena that was mistakenly thought to be related.

Only 53 miles separate San Bernardino and Pasadena and the possibility of fighting heavily armed gunmen in both places was reportedly discussed by California law enforcement officials. Watertown police chief Dupuis says the Marathon bombers’ invasion of his town helped law enforcement realize that in terrorism situations they might have to fight gunmen on two fronts. And that led to two changes. First, sometimes you need more help.

“We belong to the Northeast Massachusetts Law Enforcement Council.”

NMLEC, a consortium of nearly five dozen local police agencies, was set up in 2005. After the Marathon Bombing shootout in Watertown, the organization put in place a system for better communication.

“And if we needed an abundance of help here, if we needed a SWAT team with some specialized units, we make a call. And when we call for additional resources there’s a chief in charge of that unit that comes with it and that chief will come to Watertown to formally offer their help.”

And sometimes you can have too much help, which leads to confusion. That may have been the case in San Bernardino. It certainly was in Watertown.

“I think one of the most significant challenges that came out of Boston is self-deployment and unified command and control,” says John Cohen, former under-secretary for intelligence at the Department of Homeland Security and now a professor at Rutgers University.

“There's nothing worse than to have people who self deploy, who operate independently," Cohen says. "They put not only themselves at risk but they put other personnel at risk as well.”

More than 2,500 cops from as far away as New Hampshire and New York responded to the pursuit and search for the Marathon bombers, and it wasn’t always clear who was in charge. Dupuis says lessons were learned.

“So if we need to delegate any activities, we can have another chief go and be in charge of that activity. We all work together and try to help each other out.”

“We learn from each of these events. And we learned quite a bit from the Boston Marathon bombings and the subsequent arrests and violence associated with it.”

Dupuis says — as he watched the news of the carnage and subsequent search for the killers in California — he found himself thinking of another dubious distinction shared by Watertown and San Bernardino: Places few had ever heard of were suddenly thrust into the national spotlight by a kind of violence that anonymous small cities and big towns would never have imagined before.