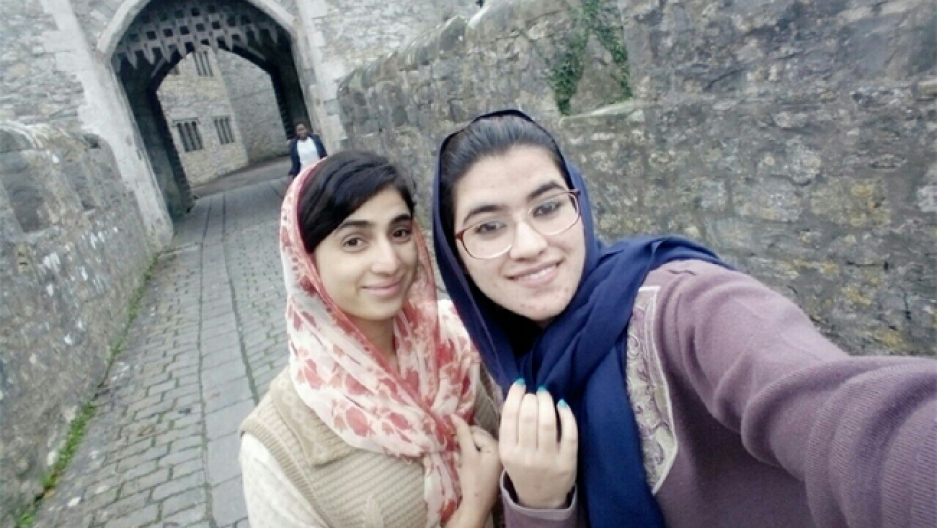 Ramzan and Riaz in front of the 12th century Welsh castle where UWC Atlantic College is located.

On a Tuesday in October 2012, a bus carrying the students of Khushal Girls High School and College in Pakistan’s Swat Valley came to a stop. The girls inside were on their way home from a day of exams.

“I was looking outside daydreaming,” recalls Shazia Ramzan, who was 14 years old at the time.

“I was talking with my best friend, Sana,” says Ramzan's friend, Kainat Riaz, who was 16. “I was so happy that I finished my paper.”

Moments later, Taliban gunmen boarded the bus looking for the girls’ classmate, Malala Yousafzai, a 15-year-old advocate for girls’ education who wrote about the Taliban and education on her blog. The men asked, “Who is Malala?” Moments later, she was shot in the forehead. Ramzan was hit twice in the arm, and Riaz in the hand.

In 2007, the Taliban arrived in the Swat Valley — known by locals as the “Switzerland of Pakistan” for its natural beauty — and began ordering the closure of schools, particularly for girls. The next year, Malala protested the closures with a speech entitled, “How Dare the Taliban Take Away My Basic Right to Education?” By the end of 2008, the Taliban had banned all schools for girls.

The October 2012 shooting was just one act of terror used to enforce the ban. The Taliban bombed schools, raided houses, and threatened teachers. The girls who kept going feared for their well-being. They hid their schoolbags beneath their clothes and kept books under their beds and burkas just to avoid discovery.

After the shooting, Malala was moved to Britain for months of medical treatment. She has since gone on to pursue her education and to become the youngest-ever Nobel Peace Prize winner, a human rights activist, author and the subject of the recently released documentary "He Named Me Malala." The film is tied to a 12-month social action and advocacy campaign called Stand #withMalala sponsored by the Malala Fund, which was co-founded by Malala and her father, Ziauddin Yousafzai.

At first, Ramzan and Riaz remained in Swat. They wanted to return to school but were not allowed on the bus for fear the Taliban would come after them again. Instead, they took rickshaws. When a bomb went off behind Riaz’s house, neighbors blamed her and asked her to leave.

In 2013, hoping for an education free of these struggles, both girls accepted an invitation to study at UWC Atlantic College in Wales. (Malala had been offered a scholarship, but declined and asked that her two friends be given the opportunity instead.) They arrived without their families, speaking almost no English.

Today, Ramzan and Riaz are working with the Malala Fund to advocate for girls’ education. They spoke about how their experience led them to stand up for other girls — not just in Pakistan, but everywhere.

YES!: What was it like growing up in the Swat Valley?

Riaz: My childhood was the best. I had freedom to do whatever I wanted, especially because my family is really educated. [I miss] my town, my schools, my teachers, my friends, everything.

Ramzan: I miss all the beautiful mountains where it snows. We had peace. Then the Taliban came to Swat.

YES!: What happened when they came?

Ramzan: It was really difficult for us to go outside and to get an education. Even for shopping, women were not allowed. So my peaceful Swat became horrible.

One day the military came and said, you have to leave your homes. So everyone left their houses. We spent three months outside of our city. When we came back, it wasn’t our Swat. It was completely different.

Riaz: In the beginning they said that they were just talking about Islam. Everyone wants to follow Islam but the way they are doing it — like stopping things like education and women’s rights... In the end they are doing such a stupid thing. It was not in Islam.

When they came and wanted to stop the girls’ education they sent letters to each school. Sometimes they did bomb blasting in the schools and sometimes there were students and teachers who died.

There was just one school open. First, I studied in another school and they got a letter from the Taliban that said you can’t teach to children — especially girls. So that is why I changed my school and I went to Malala’s father’s school.

YES!: Could you tell me a little bit about the day on the bus? What happened after?

Riaz: The guy came and asked, “Who is Malala?” But because Malala didn’t cover her face, maybe he knew that she was Malala. And then he shot us. At that time I just saw my hand and Malala. She fell on the bus floor and then my eyes became blurred and I didn’t know who came here and what happened. When I saw the blood it was a really hard time for me because I never saw blood. And there was the screaming of people. I screamed a lot.

Ramzan: Our driver took us to the hospital, which was near our houses. After dressing my hand and my shoulder, they asked me to bring my family. They handed me the phone and I couldn’t find the words to talk to my family that I am in hospital. Then I asked the doctor, “Where is Malala?” I could only think about Malala at that time.

Next morning, they took me to the hospital where Malala was, an army hospital. When I entered the ward I was in a wheelchair. The doctor showed me the person who was lying on the bed. “Do you know who she is?” And I said, “No, who is she?” He told me that she is Malala. I couldn’t believe. The swelling on her face. [She] was unrecognizable.

Riaz: I didn’t go to hospital because I felt that the guy would come again and he will shoot me. But I didn’t know why. He shot Malala because Malala rose for education and she wrote her diary. But at that time I didn’t realize anything. At that time, I just thought that that he will come and follow me and shoot me and I will die. That’s it.

When I came home, only my brother and sister-in-law were in the house. He saw the blood on my clothes and on my scarf. He said, “Oh let’s go to the hospital right now.” The bullet was still in my hand.

YES!: What did you feel when you were released from the hospital?

Ramzan: I spent a month there. I wasn’t allowed to go outside and people were not allowed to meet me. It was really hard for me because I wanted to see sunshine.

Riaz: At that time after I got shot, for one week I couldn’t sleep at all. Because whenever I just closed my eyes [I pictured] what happened to us on the bus: lots of blood and Malala and my hand.

So after my recovery, one-and-a-half months, I wanted to start to go to school again. We [asked] other people for bus travel. Openly they told us, “No, we are scared. We are sorry we can’t pick you up.”

After three months we had a bomb blast behind my house. So my town told me, “This happened because of you and you should leave the town.” I said, “How could I leave the town where I grew up?”

YES!: When did you realize that you could speak out and stand up to the Taliban or anyone else threatening your education?

Riaz: And education is not just for girls to go to school and learn what the teacher says. Education is also from other people — from your parents, from your friends, from everyone. What they think, what they said.

YES!: We asked some students in the United States what questions they would ask you. They want to know, how do you feel about going to school in a class with both boys and girls?

Ramzan: For me, I think it’s really good to get education with boys and girls, coeducation, because it makes me think that we are not different. We are equal. That is what I feel here in UWC Atlantic College with the mix of other students. Mix of boys, mix of girls. We have different nationalities. When you hear other people’s stories it makes you think that we are here in the right place. And I feel like this should be similar in Pakistan. In Pakistan now it is getting similar—when boys and girls are allowed to get education.

Riaz : My favorite subject is biology. When I was 8 years old I decided I wanted to become a doctor. Especially I want to become a gynecologist because in Swat, especially in the village, a woman can’t go to a man doctor and in Pakistan most of the specialization doctors [are men].

YES!: What can teachers, students, families, and communities do to help what you and Malala have started?

YES!: If you could invent a perfect school, what would it look like?

Ramzan: (Laughs). I really like badminton but [there's nowhere in] Swat where I can play badminton. I will organize a big ground for the girls so they can play what their hobbies are. I will let them to choose what they want to do.

I will also give the opportunity to people who want to speak [to] get more confidence and courage. Don't be silent. Don’t wait for others. Don’t be shy, because this is your life.

YES!: How have you changed since that day on the bus?

Ramzan: I have changed a lot. I wasn’t comfortable to speak up for my rights before that. I always sat in front of the TV and watched other people [give] interviews and speeches. You know when you have that feeling that in your heart that you want to do something but then you don’t feel comfortable to do [it]?

I was really scared in my classes to speak to my teachers. But now I speak freely. I share my ideas.

Riaz: Now I have more confidence, more strength, and more support from my family and from other people. I feel now that I can do everything. I know I’m not a great girl, but I can see sometimes that I can do something that I didn’t expect from myself.

YES!: What is your wish for girls around the world?

Ramzan: I wish for them that they can achieve what they want. This is your world. This is your choice. You should stand up for your rights. No one can stand for you.