When you first arrive at the Maasai Mara in Kenya, you look out over a plateau so vast and beautiful that it’s almost incomprehensible.

Mara means “spotted” in Maasai, and when you look out over the plain you see small dots — hence the name. Some of those are trees, desert date trees to be exact. And some of those spots are animals.

People come from all over the world to experience this landscape and the creatures that live in it, the elephants, giraffes, cheetahs and lions. To see them, you have to hire a game driver. Some 500 game drivers work in the Maasai Mara. Only seven are women.

Sophie Sadera is one of them, a Maasai from this area, and I wanted to find out how she broke into the business. She now works as a guide at Angama Mara, one of the newest, fanciest lodges in the region — not an easy job for a person of either gender to attain.

Sadera says her mother worked hard to get her through high school, but when she expressed an interest in becoming a guide, her mother was taken aback.

“That’s a man’s thing,” Sadera recalls her mother telling her. But Sadera approached an uncle working in the hotel industry in the area, and he went to talk with her mother. “If she’s not happy doing what she wants, she won’t perform well,” he told her. 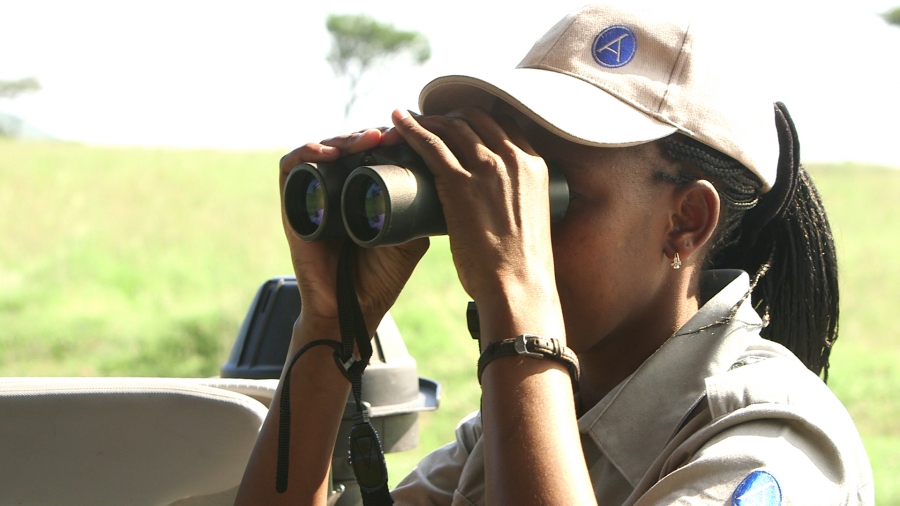 Sophie Sadera on a game ride.

So Sadera went to guiding school for a year. Now that she's a full-fledged guide, “I must say, she’s the happiest mom,” Sadera says.

And when she’s back home, she tries to find time to visit her old primary school and talk with the girls there. She encourages them to stay in school past primary school and then “get their own jobs. Because many of them think that, ‘I’ll get married by maybe a husband who will be working.’”

Sadera’s love of her job, and her professionalism was evident as we took an early morning ride through the wilderness, stopping along the way to look at animals in the tall grasses. Or in the case of the elephants, right in the middle of the road, blocking our way. We turned around.

Sadera remained calm throughout, which is a trait you want in a guide leading you in an open vehicle around large wild animals. Later that night she admitted that the elephants had gotten a bit close for comfort.

On the morning drive, Sadera was careful to warn us that some animal sightings are quite rare, especially cheetahs. But we saw a cheetah up on a hillside scouting out the landscape for prey. And then it happened: the cheetah found a herd of impala. We watched as it hunkered down and then bolted in for the kill. It’s the kind of experience you remember for the rest of your life. And Sadera helps people find it day after day.