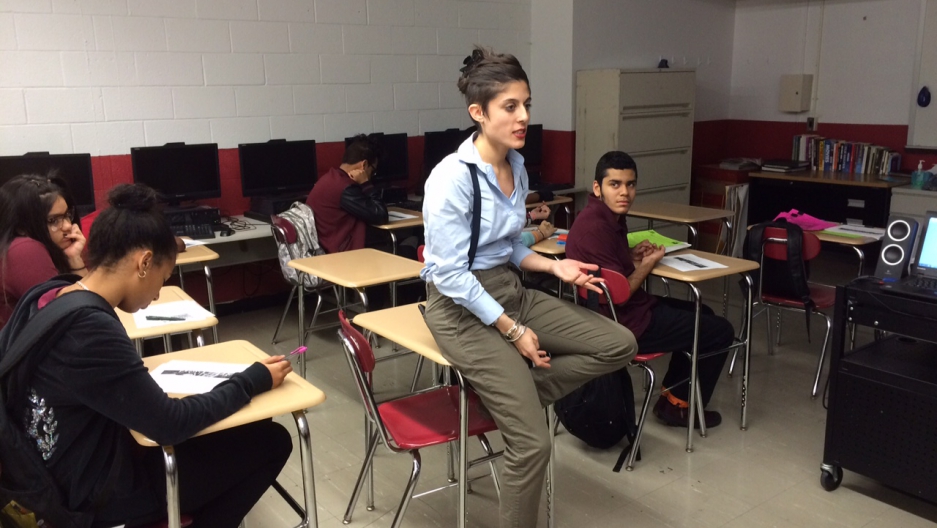 Teacher Sarah Camiscoli with students at the Urban Assembly Bronx Academy of Letters.

It’s hard to say the Urban Assembly Bronx Academy of Letters isn’t diverse. Almost all of its approximately 600 students are black and Hispanic, including many from different countries. But there’s one demographic the students rarely see.

"Honestly I know it sounds racist, but I’ve never seen so many white kids in the school," says 11th grader Leslie Sigaran.

Sigaran is taking a new elective class on integration in public schools. Their teacher, Sarah Camiscoli, said she started the project partly in response to a 2014 study by UCLA researchers finding New York has some of the most racially segregated public schools in the United States. The chancellor recently decided to allow new admissions plans for seven schools to encourage diversity, but some groups want a more comprehensive approach.

"This is such an important debate happening in New York City," Camiscoli explained. "I wasn’t hearing their voice in the conversation," she says, of students.

One day this fall, Camiscoli engaged her class in a conversation about why diversity matters. She showed them studies finding black and Latino kids who attend integrated classrooms do better academically than those who don't (some researchers debate how much better they do, and why, but researchers in North Carolina and in Texas did find evidence). She also said pupils from mixed schools are more likely to display more tolerance and to even get jobs in integrated settings. Diversity also goes hand-in-hand with resources, because of studies finding black and Latino students are more likely to attend schools with less experienced, first year teachers.

She then broke the students up into groups and ask them to design ideal schools that take into account student demographics, types of classes and teacher experience.

By the end of the period, all of the groups had created classrooms with mixed groups of students.

Camiscoli's class grew out of a group she started last year called IntegrateNYC4Me.

She took just a few kids to visit a public school on the Upper East Side that has a majority of white students, and they compared their experiences.

The integration class is having conversations with students at a school in Brooklyn, also predominantly white.