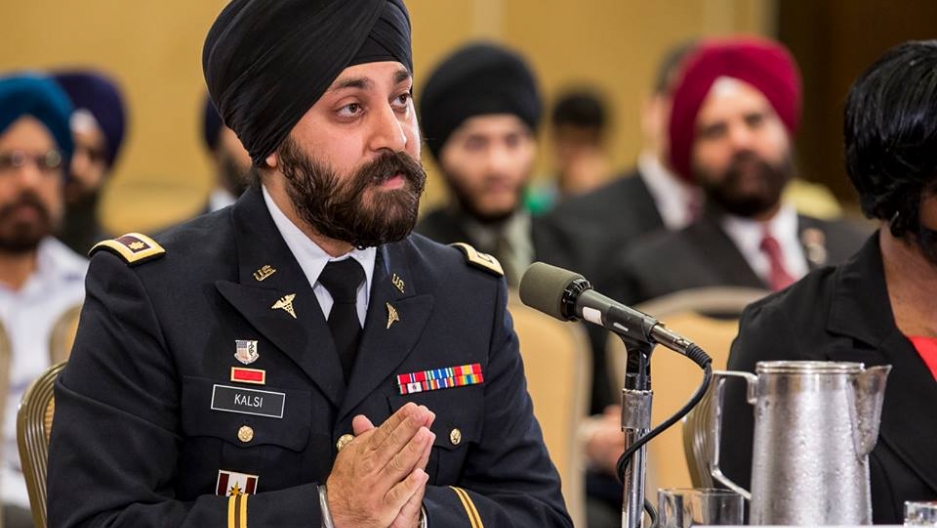 Army Maj. Kamal Singh Kalsi testifies before the US Commission on Civil Rights in May, 2013

When Major Kamal Kalsi wears his Army uniform, it includes what he calls his religious uniform: his untrimmed beard tied neatly under the chin, his unshorn hair wrapped in a turban.

Kalsi is a Sikh, born in India and a fourth generation military man. His father and grandfather both served in the Indian Air Force. Kalsi's great-grandfather served there in the Royal British Army before India gained independence. Like his fathers before him, Major Kalsi observes his religion as he serves his nation.

But Kalsi had to fight for the privilege.

Major Kalsi is one of only three Sikhs granted a religious accommodation by the Department of Defense. It permits him to serve on active duty while also observing his Sikh tradition, wearing a turban with uncut hair and beard.  (A fourth Sikh, Capt. Simratpal Singh, was granted a temporary accommodation earlier this month and is waiting to hear whether it will be made permanent.)

Other Sikhs have been effectively barred from serving since 1981, when the Pentagon imposed a dress code banning long hair and beards, saying that they interfered with the wearing of a military helmet and impaired the effectiveness of gas masks in a chemical attack.

Kalsi, who was recruited by the US Army while he was in medical school, had been preparing to be deployed as an Army doctor when he received unexpected news from his commanding officers. Despite pledges to the contrary, Kalsi would not be allowed to continue to wear the beard and turban on fulltime active duty.

"They said, 'Look, we support you staying in. We'll just go up the chain of command.' And therein started a process that took me the better part of a year and a half," Kalsi recalls.

He began a personal campaign to get a religious accommodation from the Army, the same accorded to observant Jews who wear religious headwear

"We've known for quite some time that the helmet and the gas mask issue is in fact not really an issue," Kalsi says. "If you note, Special Forces and Navy Seals routinely have relaxed grooming standards. You'll see a lot of them with facial hair, beards, long hair. And so we're left asking ourselves 'What's the problem? If Jews can wear the yarmulke or the skullcap, and they can accommodate that - why not the turban?"

Kalsi's effort to obtain a religious waiver got a big boost from a civil rights group, the Sikh Coalition, with legal help from the international law firm McDermott Will & Emery and the Becket Fund for Religious Liberty. The "Sikh Right to Serve Community Toolkit" galvanized support for a petition that drew signatures from 15,000 people nationwide, including nearly 50 members of Congress. It called on Robert Gates, the Department of Defense Secretary at the time, to allow Kalsi and a fellow Sikh, Tejdeep Singh Rattan, to wear a turban and beard while serving the country.

In October, 2009 Kalsi got his religious accomodation and became a fulltime ER doctor for the US Army. (Rattan was granted his in 2010) 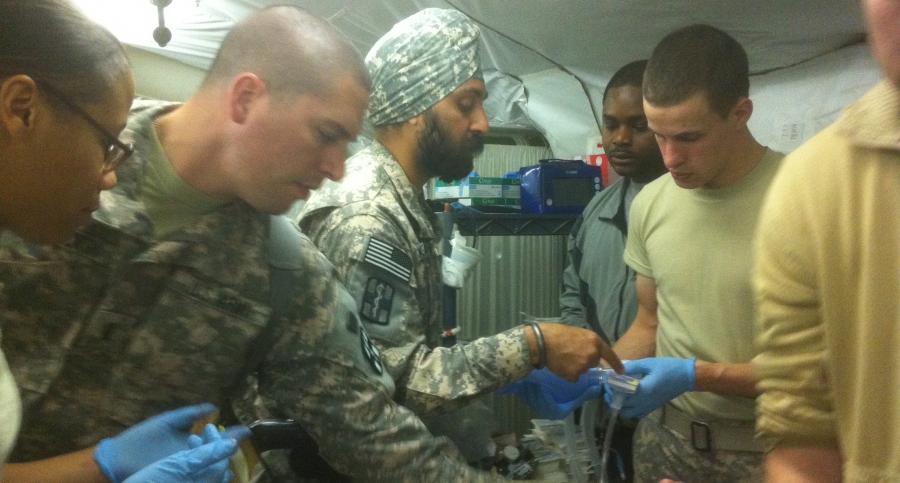 In January 2011, Kamal Kalsi served in Afghanistan as Officer-in-Chief of a tented Emergency Room in Helmand province.

Today Kalsi is determined that other Sikhs should not have to go through such an ordeal to join the armed services.

"The U.S. military is this nation's largest employer," Kalsi says. "They set the tone for the rest of the nation in many ways. If they deem Sikhs' turbans and beards to be unfit for duty, it has repercussions throughout the rest of our country. In order to push back against job discrimination, bullying and the increasing hate violence we are seeing today targeting Sikhs, we need to be able to serve and serve freely, like we did during the World Wars when 80,000 Sikh soldiers died fighting alongside Allied forces."

The military tradition runs deep for Sikhs. Like the tradition of wearing unshorn hair, it dates back hundreds of years to the time of the Sikh-Mughal wars.

"Sikhs keep our hair unshorn as a mandatory religious practice set by our 10th prophet, Guru Gobind Singh Ji," Kalsi notes. "He wanted his followers to have a distinct identity, so that we could never hide, so that people could look for us and to us in times of need. We are expected to uphold a saint-soldier tradition in which we defend the defenseless and fight for social justice. The Mughal empire had placed a price on each Sikh head. The message our prophets sent the Mughal empire was clear. You can hunt us, but we will never hide, and we will continue to fight against your oppressive policies that prohibit religious freedom."

The Sikh Coalition, which provided legal and lobbying support to Kalsi, is also now assisting Captain Simratpal Singh in his effort to receive Pentagon permission to retain his beard and turban. Harsimran Kaur, Legal Director of the Sikh Coalition believes that including observant Sikhs in the military sends an important message to the public.

"It affirms that Sikhs and other religious ethnic minorities are part of the fabric of this country and have an equal right to participation," she says. "When we have inclusive policies in place we show the world that we practice what we preach, that our democracy upholds the values of freedom, of tolerance, of pluralism. We can't expect other countries to practice or incorporate those principles if we don't practice them ourselves."

In November, 27 retired US generals signed a letter to Secretary of Defense Ashton Carter recommending that he end the dress code that prevents Sikhs from observing their faith while in active service.

They wrote, "President Harry Truman promised 'that there shall be equality of treatment and opportunity for all persons in the armed services without regard to race, color, religion, or national origin.' We urge you to strengthen DoD Instruction 1300.17 and make this promise real for patriotic Sikh Americans who wish to serve in the U.S. Armed Forces."

Kalsi and his fellow Sikhs are still waiting for Secretary Carter's response.