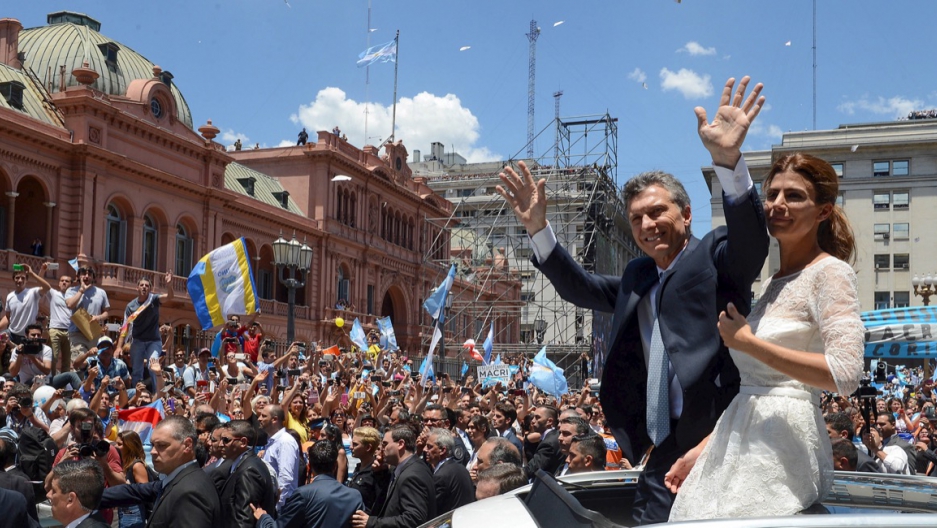 Mauricio Macri and his wife Juliana Awada wave to the crowd after his swearing-in as president of Argentina on Dec. 10.
Credit: Argentine Presidency
Share

The expectation for change in Argentina is palpable. After 12 years of Kirchner rule, the opposition has risen to power with President Mauricio Macri at the helm.

The title of their alliance? “Let’s Change.”

And, indeed, some change is inevitable in a country that has been scraping the bottom of its foreign reserves for months in efforts to maintain an overvalued exchange rate while simultaneously meeting existing debt repayment obligations.

In many ways, the political realities of the next four years were decided well before the election runoff of Nov. 22, as the three main candidates’ positions converged in the weeks leading up to October’s first round of voting. Even then-President Cristina Fernandez de Kirchner’s own Victory Front (FPV) coalition fielded a candidate — Daniel Scioli, then-Governor of Buenos Aires province — who promised some degree of change from the most controversial of Fernandez’s economic measures. Fernandez herself was conspicuously missing from Scioli’s side for much of the runoff campaign.

In short, “Kirchnerismo” — the most recent incarnation of the political chameleon that is Peronism — realized perhaps a bit too late that it had gone too far for the public’s appetite.

How realistic is the assumption Macri will be a radical break from Fernandez?

Yet how realistic is the assumption among both Argentines and international investors alike that Macri, until recently mayor of Buenos Aires, will be the kind of radical break from Fernandez that will allow Argentina to again attract business interests that first began their exodus after the country’s infamous 2001 default?

That Macri, a businessman himself, is sympathetic to business investors is without question. But such sympathy can only take one so far in Argentina, and arguably even less far in Macri’s case.

The electorate was effectively split wide open during the November runoff. Dissident Peronists sided only slightly more with Macri than with Scioli after their preferred candidate did not make it to the second round of voting. In the end, just over 680,000 votes separated the two men of the more than 25 million cast, and Macri’s 51.34 percent win was not exactly a landslide. In a sense, then, Macri has entered the presidency at a disadvantage, with his political capital circumscribed at the outset.

More from GlobalPost: The lives of Syrian refugees in Buenos Aires, in pictures

Further complicating matters, his “Let’s Change” alliance will not control either house of Congress. Indeed, although no party enjoys a majority in the Chamber of Deputies, the Senate will remain controlled by the former president’s FPV, as will half of the provincial governorships.

Macri’s cabinet is largely composed of his party allies, with the exception of a sole “Kirchnerista.” But that’s being overshadowed by certain FPV loyalists who have vowed to continue in high-level positions, the attorney general among them.

Rumors of the FPV’s demise, as Fernandez herself would no doubt attest, are thus greatly exaggerated. It will remain the dominant force in Argentine politics for the time being. Argentina's former President Cristina Fernandez de Kirchner speaks next to a statue of her late husband and predecessor Nestor Kirchner on her last day in office at the Casa Rosada on Dec. 9.

Perhaps realizing the realities of his presidency before he even won the election, Macri was at pains to emphasize not change, but rather continuity with many of Fernandez’s more popular measures, including her “Universal Allocation per Child” cash transfer program — welfare anathema to many on the economic right. Runoff campaign advertisements put out by Macri promised to “keep what is good” while asking voters, “What would happen if we took the best of each [ideology]?”

More from GlobalPost: Argentina has stopped keeping count of poor people for some strange reasons

Macri’s pivot to Argentine centrism was perhaps best symbolized in his controversial dedication of a statue and memorial to Juan Peron in a public act in the capital just days before the general elections. For a non-Peronist, Macri remains quite fluent in Peronismo, as indeed he must be if he is to successfully pass any legislation or wield any sustainable power.

So what can we expect of President Macri? His balancing act must be precise, as he will attempt to modify or end certain of Fernandez’s policies while definitively proving that he is not the next Carlos Menem, the country’s jailbird former president who implemented the neoliberal reforms that are commonly held by Argentines to be one cause of the 2001 financial crisis.

Beginning with economic policy, Macri has already moved to scrap currency controls, though exchange-rate stabilization is likely to take some time as a peso devaluation unfolds.

In an effort to stimulate a near-moribund economy, he has also eliminated export taxes on a variety of agricultural goods. However, taxes on soybean exports — the country’s cash cow — only slightly decreased.

Inflation targeting will likely be the next immediate objective, as it has long been in the double digits — an open secret despite the Fernandez government’s doctoring of statistics. On this front, the goal seems realistic, as Argentina has successfully tackled worse inflation in the past during much more tumultuous political circumstances.

A return to the international financial markets is expected, but only after negotiations with the “vulture funds” conclude. Given that such negotiations have not even begun and public resentment toward these creditors remains high, such a return will take time.

More from GlobalPost: Why is the Obama administration siding with Argentina against US bondholders?

On foreign policy, Macri will undoubtedly view China and Russia with more suspicion than his predecessor, who used both countries as a counterbalance to perceived US influence. Macri, however, will be inclined to see the US as more of a partner, and has already appointed a high-ranking Argentine politician and former presidential candidate as ambassador. Yet he has cautioned that he has no interest in “carnal relations” with the Americans, a phrase made famous by ex-President Menem.

Increased economic cooperation with neighbors Chile, Uruguay, and Brazil are likely. However, efforts to take a harder line within South America's trade bloc, Mercosur, regarding Venezuela have already been vetoed by the leaders of Uruguay and Brazil.

Argentina has long played second fiddle to Brazil in terms of influence through foreign policy. Macri, unlike Fernandez, will likely recognize this limitation and focus more on retooling domestic policy.

Perhaps Macri’s greatest challenge will be Fernandez herself, who despite leaving the presidency has fashioned herself to be the spiritual leader of modern-day Peronism — the Evita of her time.

Even after Macri’s victory, Fernandez doubled down, issuing emergency decrees and continuing government appointments as her legislative allies churned out bills in Congress before their terms ended.

Many, including Fernandez, refused to attend the presidential swearing-in ceremony. Although Macri publicly expressed shock and outrage at Fernandez’s scorched earth campaign, it is doubtful he was terribly surprised — Fernandez has never fashioned herself as anything other than a political soldier in the trenches, her infamous penchant for Louis Vuitton aside.

One wonders whether, despite her departure for her native Santa Cruz province, it will be her presence that will continue to be the strongest inside the halls of the Casa Rosada presidential mansion. Macri will likely spend the better part of the presidency cleaning up the proverbial mess she has left behind.

Certainly with her son as a newly sworn-in congressional legislator and her sister-in-law as the newly elected governor of Santa Cruz, the Kirchner brand might at worst only be taking a breather.

For Fernandez herself, it may only be halftime, as there has already been open talk of another run for the presidency in 2019.

In the meantime, as she famously quipped to her supporters after Macri’s runoff win, “I’m not leaving, don’t worry. I’m always going to be with you.”

The wise among us would take her as seriously as they have Macri’s win. No doubt Macri will.