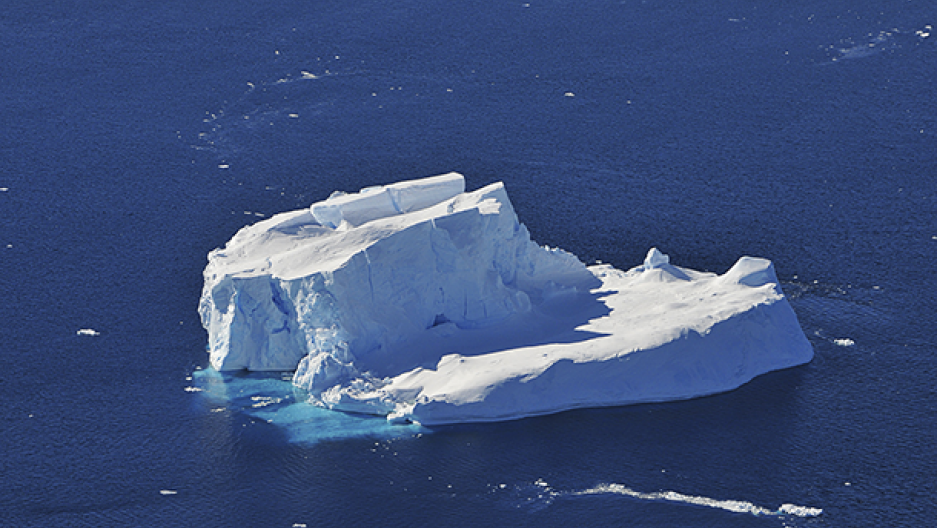 An iceberg off West Antarctica. James Hansen says the melting West Antarctic Ice Sheet could create a tipping point from which the climate cannot recover.

Two degrees Celsius. It has become a familiar number to anyone who follows news about global warming and climate change.

Climate negotiators in Paris and others have repeatedly stated that limiting global temperature rise to two degrees Celsius, or about 3.5 degrees Fahrenheit, is a reasonable target for mitigating the worst effects of climate change. It was even written into the formal COP21 agreement reached over the weekend.

But there’s a problem with this number, according to one prominent scientist: It doesn’t make sense.

“The number was picked out of a hat,” says James Hansen, a former NASA scientist and now a professor at Columbia University “Simply because people thought that's probably the best we can hope for — because we've already got almost one degree of warming and we know there's more in the pipeline. And it’s very difficult to move off of our present largest energy source, which is fossil fuels.”

“We know it’s not a sensible target, because if we look at the Earth's history, the last time it was two degrees Celsius warmer than pre-industrial [times], sea level was six to eight meters higher than it is now. So why would we set that as a target?” Hansen asks.

Hansen has been asking questions about the Earth’s climate for a long time: he was one of the first scientists to look seriously at the issue back in the 1970s.

At that time, scientists realized that humans were changing Earth’s atmosphere through the use of chlorofluorocarbons. Chlorofluorocarbons were destroying stratospheric ozone that surrounds the Earth and protects humans from damaging ultraviolet radiation. The concern was whether the loss of ozone would lead to more skin cancer. But Hansen asked an even more compelling question: What about the effect on the climate?

The subject became so engrossing that Hansen resigned from another experiment he was running and began to devote 100 percent of his time to climate study.

“I switched from Venus to Earth because there are people living on this planet,” Hansen explains. “I remember remarking to my friend Andy Lacis, ‘This is really going to be interesting. Before our scientific careers are over, we should actually see the climate change. Because that's what we computed in our models.’"

He predicted that scientists would be able to “separate the signal from the noise” within a few decades, and that by the early part of the 21st century, even the public would begin to notice. And it has.

But, of course, Hansen says, the real issue is what's going to happen from now on.

“So far, the climate change is relatively modest,” Hansen says. “We’re beginning to see effects. The frequency of extreme events is increasing. But the potential for what will happen several decades in the future during the lifetime of young people is much greater. It's possible that we could push the system beyond tipping points so that young people cannot control the outcome several decades downstream.”

Hansen is most concerned about the disintegration of the ice sheets in Greenland and Antarctica and the effect that would have on sea level rise.

“I would argue that we could very well get large changes by the second half of the present century,” he says, “which would mean just 35 to 85 years from now. ... Because if we look at Greenland and Antarctica, we see that they are beginning to shed mass, and shedding it at a faster and faster rate. And I argue that it is likely to be a very nonlinear process.”

Hansen says scientists don't have models for ice sheets they can trust to give them an accurate prediction for how soon the Earth could see multi-meter sea level rise.

“We don't know whether we've passed a point where we're going to lose, for example, the Western Antarctic ice sheet,” Hansen says. “If we do, that means sea level rise of several meters. We know that we're getting very close, if we're not there yet”

Hansen says scientists can’t predict exactly how fast sea level rise would occur once we pass that tipping point — but they know it would occur.

“We just don't know which generation is going to be feeling the full effects,” he says. “But if we look at the ice sheets now and see how rapidly they're beginning to change, it looks to me like it's going to be our children and grandchildren, not some tenth generation in the future.”

“We should add a fee to oil, gas and coal,” he says. “Collect the fee from the fossil fuel company at the source: the domestic mine or the port of entry. And 100 percent of that money should be given to the public. It should not be taken by the government to make the government bigger. Instead, give an equal amount to every legal resident of the country. That way, the person who does better-than-average in limiting their fossil fuel use will actually make money.”

Economic studies show that this would work, says Hansen, and he believes it would make the United States more competitive with other countries in the development of alternative energies.

“If we're an early adapter of this type of policy, we would begin to move our industries and begin to take advantage of our entrepreneurs developing low carbon energy sources,” Hansen argues.

The problem, he believes, is that world leaders are heavily influenced by the fossil fuel industry.

“We have well-oiled, coal-fired senators and representatives who continue to vote for industry over the interests of the public,” he says.