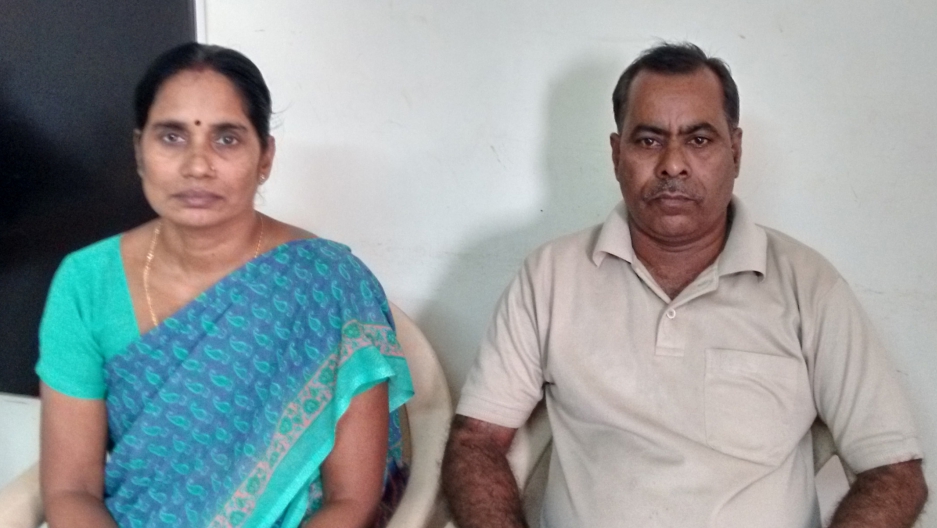 Asha Devi and her husband Badrinath Singh in their apartment in New Delhi. Three years after her daughter's gang rape and murder, Asha says attitudes about rape victims are starting to change in India. “Earlier, families who experienced this would hide it. Because they’d think, oh our reputation will be ruined. Now, people are unwilling to tolerate this.”

Three years ago today, a horrific incident shook India. A 23-year-old student was gang raped in a moving bus in India’s capital, New Delhi. She later died from her injuries.

The brutal attack made ordinary Indians step out into the streets for the first time, to demand measures that would put an end to sexual violence. It also made activists out of the victim’s parents — Badrinath Singh and Asha Devi.

The couple lives in a fast-growing neighborhood of New Delhi, in an apartment provided by the government. The walls of their living room are bare — no photos of their daughter. But there are a few pictures and certificates with the word “Nirbhaya” written on them. They were awarded to their daughter posthumously. Nirbhaya, which means ‘fearless’ in Sanskrit, was the name given to her by the Indian media. Indian laws prohibit the naming of rape victims in the media, but in the months following the attack, her father revealed her real name (Jyoti) to give courage to other victims.

Today, the couple runs a small non-profit named after their daughter, Nirbhaya Jyoti Trust, to help other victims of rape and sexual assault.

The pain of their loss and the public outrage against the attack inspired the couple to become activists.

“We saw on TV and newspapers that the entire country has spoken up against this,” Asha says. “For a year, I struggled with it myself, and both of us would sit down and ask ourselves what should we do? How do we reach those other victims of sexual violence, and members of the public who protested on our behalf and were beaten by the police or attacked with water cannons?”

Today, they help victims who are poor and don’t have the resources to deal with the legal system. “If they need a lawyer, we find them a lawyer,” Badrinath says. “We now know many lawyers who will take these cases pro bono.”

His wife says she personally works with victims and their parents to give them emotional support, especially when they may be reluctant to pursue the case in court. “I like talking to victims and their families,” she says, “because I know they are going through the same pain that we are.”

They also speak to the media whenever they can; they reach out to lawmakers and work with activist groups, not just to help victims, but to demand changes that would make India safer for girls and women.

But lately, they have been feeling less hopeful than when they started.

A lot has changed on paper. The government has enacted stronger laws against rape and sexual assault — and experts say reporting of these crimes have gone up as a result. It also set up fast track courts to deal with the high volume of cases. But with a shortage of judges and courtrooms, these cases take a long time.

Their own case was tried promptly. Within a year, the judges had sentenced all but one of the convicted perpetrators to death. But the defendants have appealed to the Supreme Court and the death sentences have been stayed pending that decision. No hearings on the appeal have been held, Asha Devi says. And she wants to see that change. She wants prompt justice for victims.

Both she and her husband support the death penalty for rape, which puts them at odds with many human rights advocates here. And they want juveniles prosecuted as adults, something that is also a source of ongoing debate in India. The juvenile perpetrator in their daughter’s case was sentenced to three years and was due to be released this week. But the Singhs’ petition to the National Human Rights Commission to keep him in prison, and the huge public outcry over his scheduled release, prompted the government to make plans to send him to a rehabilitation facility, according to the BBC.

But while they’re frustrated by what they see as inaction by the government, Asha Devi is heartened by more people speaking up about sexual violence. “People have realized that they must speak up against this,” she says. “Earlier, families who experienced this would hide it. Because they’d think, oh our reputation will be ruined. Now, people are unwilling to tolerate this.”

India plans to sell a handgun designed for women

But she says that attitude change isn’t enough; people have to do more to hold boys and men accountable for their behavior. “When a girl steps outside her home at 9 p.m., then everyone says, ‘Why was she out at that time of night?’” Asha Devi says. “But when boys are out at midnight, getting drunk, riding around on motorcycles and making trouble, nobody’s asking them questions. Ultimately, it’s our society’s faults. It’s our fault, parents like us, that we don’t ask our sons why did you come home so late?”

Asha Devi says change has to happen at home. Parents must give their daughters the same love, the same nourishment, the same education as their sons, just like she and her husband did.

“We didn’t differentiate between a son and a daughter,” her husband says. “We sold whatever little bit of land we had to give her an education.” They loved her as much as their younger sons, and pinned their hopes and dreams on her.

And that is why the work they do now is so hard for them, Asha Devi says, because every conversation reminds them of their daughter.

“This isn’t easy for us,” she says. “It’s very difficult. Our child was in such awful condition. She was alive for 10 days after the attack. Whenever she would gain consciousness and ask for water, we couldn’t give her a drop.” The rapists had shoved a metal rod inside of her, destroying her digestive system and damaging other organs.

The only thing that matters to her is the hope that one day, no girl or woman will have to go through what their daughter did.