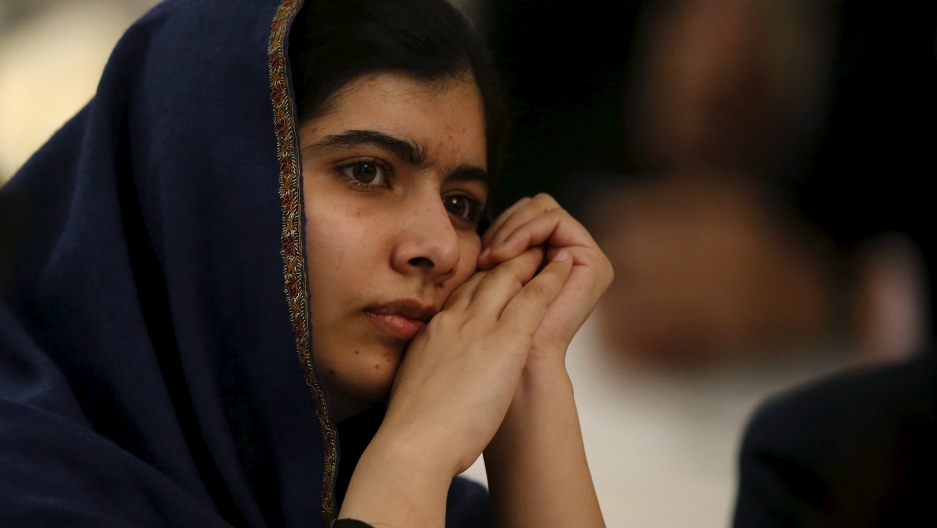 Nobel peace laureate Malala Yousafzai listens to a speech at a Poppies for Peace in Peshawar event to mark the 2014 Taliban attack on the Peshawar Army Public School, in Birmingham Britain, December 15, 2015.
Credit: Phil Noble
Share

Nobel prize winner Malala Yousafzai condemned Donald Trump's views on Muslims on Tuesday, at a somber ceremony to remember the 134 children killed in a Taliban attack on a Pakistani school a year ago.

"Well, that's really tragic that you hear these comments which are full of hatred, full of this ideology of being discriminative towards others," Malala told AFP, in response to recent comments by the US Republican presidential candidate.

"The more you speak about Islam and against all Muslims, the more terrorists we create," she added in an interview with the UK's Channel 4. "So it's important that whatever politicians say, whatever the media say, they should be really, really careful about it. If your intention is to stop terrorism, do not try to blame the whole population of Muslims for it because it cannot stop terrorism. It will radicalize more terrorists."

Trump has been heavily criticized for calling for a ban on all Muslims entering the United States after a Muslim husband and wife killed 14 people in a shooting rampage in California, an incident classified as a terrorist act.

"It will be very unfair, very unjust that we associate 1.6 billion with a few terrorist organisations," he said, referring to the number of Muslims worldwide.

The event was organized by peace prize winner Malala and her family, and two survivors of the attack, Ahmad Nawaz, 14, and Mohammed Ibrahim, 13, took part.

The massacre saw nine extremists scale the walls of an army-run school in the northwestern Pakistani city of Peshawar, lobbing grenades and opening fire on terrified children and teachers.

"It's not just needed in Pakistan but across the world. If we want to end terrorism we need to bring quality education so we defeat the mindset of terrorism mentality and of hatred."

Nawaz, dressed in a traditional shalwar kameez, recounted the horror of the December 16, 2014 Peshawar attack, in which 17 adults were also killed.

"I saw my teacher burned alive in that incident and the friends with whom I was playing," he told AFP.

"I was surrounded by the dead bodies of those friends. So it was the horrifying experience of my life and I still have nightmares."

Nawaz was shot in the arm. His brother was killed.

Ibrahim was in a wheelchair, having been paralyzed from the waist down.

The Taliban assault dredged up painful memories for Malala's family: she was shot in the head by the Taliban in 2012 after she had publicly advocated education for girls.

"When I was watching all these graphics and all these news on television, my wife was crying, I was crying," Malala's father told AFP.

"It was unbearable. It was very hard to watch. Our own trauma revived," he said.

"We don't curse people, its a sin to curse and we never cursed Talibans for attacking our daughter, but I must say we cursed them that day."