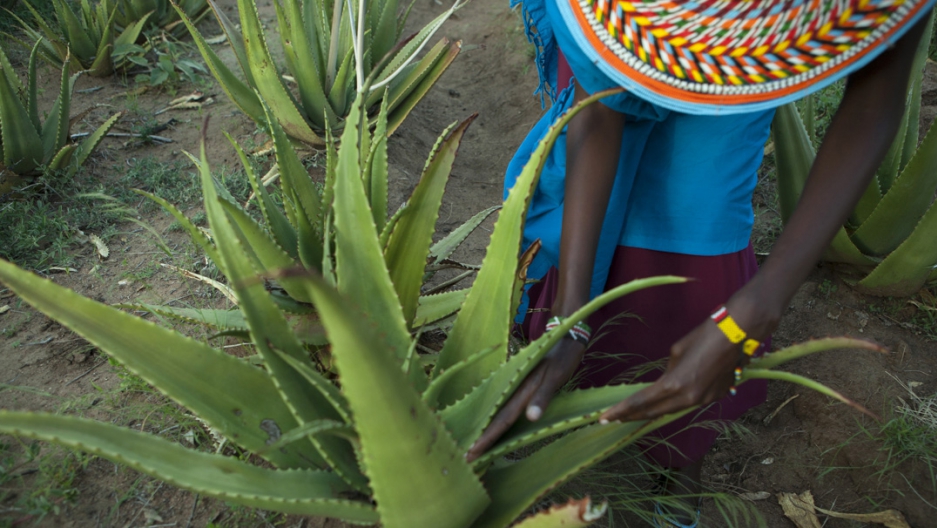 Priscilla Lekootoot shows how she harvests leaves from the aloe secundiflora plants at Twala Cultural Manyatta.

It’s a day-long drive from Kenya's capital Nairobi to Twala in Laikipia County. The last 50 miles is along a dusty road, and then you arrive at the farm of the Twala Cultural Manyatta. It’s oasis-like, and the moment you enter the gate, the fresh smell of greenery strikes a contrast with the aridity you leave behind.

Even more striking for me are the two dozen Maasai women lined up in front of the mud wall of their compound, bedecked in brightly colored beaded jewelry. The second my car door opens, they break into song. 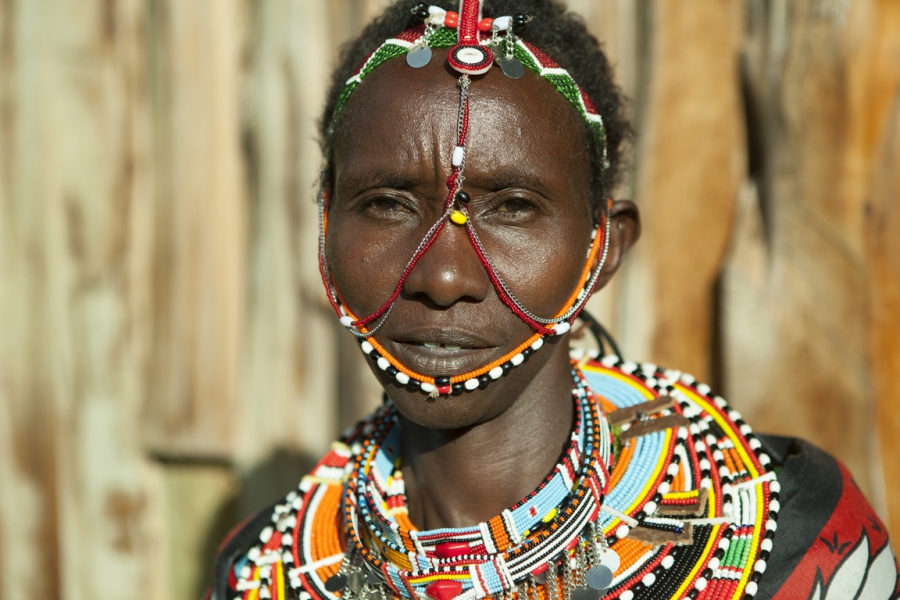 One of the 140 Maasai women who tend to 40 acres of aloe secundiflora at the Twala Cultural Manyatta in Laikipia.

The Maasai women of Laikipia 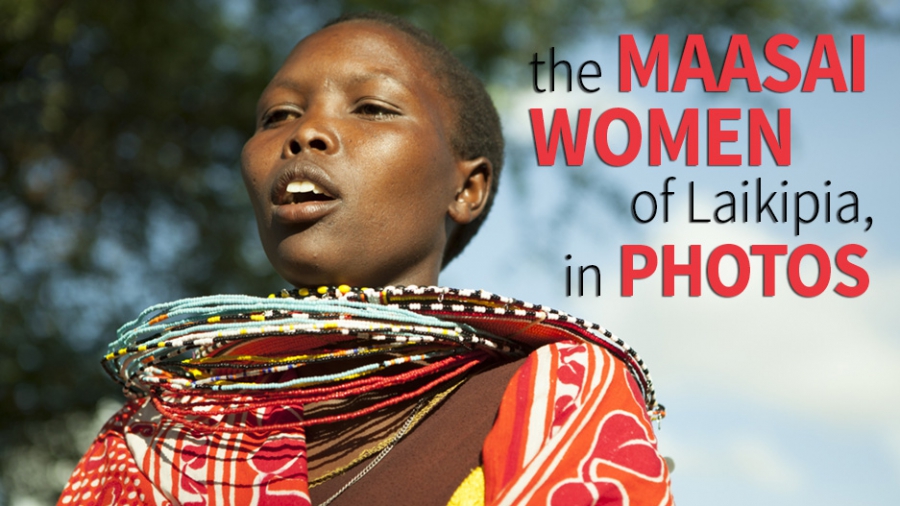 I had inquired how much press they’ve received. “Not much,” was the answer from Joseph Lentunyoi, the agronomist from the Laikipia Permaculture Project. He's crucial in many ways to the success of the women in Twala.

Publicity or not, they are eager to talk about what they have done at the Twala Cultural Manyatta. In four years, the 140 women have turned an overworked scrap of land — 40 acres actually, a not-altogether-inappropriate echo of the false promise of property to freed slaves after the Civil War — into a model of sustainable agriculture.

After all, stats indicate that women own barely one percent of the land in Kenya, even though they haul the firewood, till the fields, fetch the water, raise the children, and more. 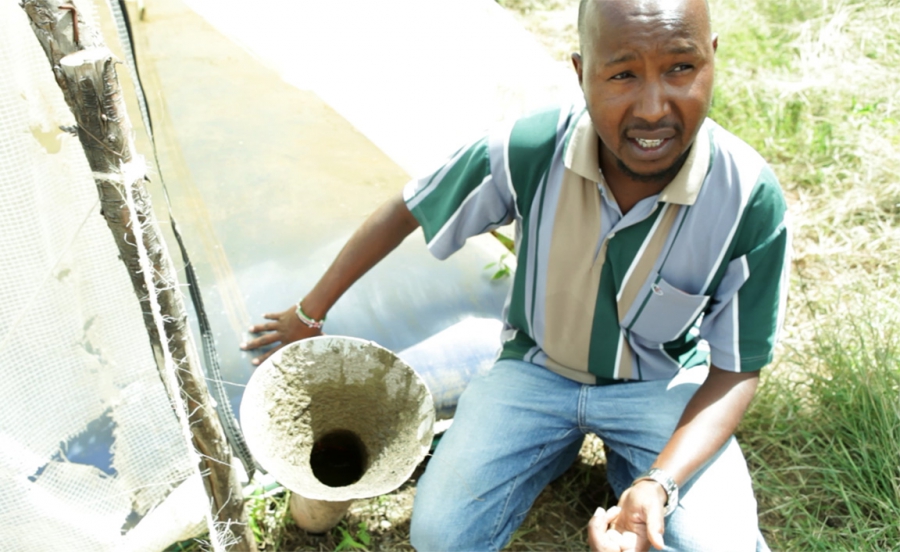 Agronimist Joseph Lentunyoi has been working with local women's groups in Laikipia to grow and sell aloe to LUSH cosmetics in England for the past two years.

But here more than 15 years ago, the women organized themselves into the Twala Cultural Manyatta (“manyatta” means “settlement” or “compound” in Maasai), and they pressured their husbands and men in their village to give them some land. They got that scrappy, arid 40 acres. And they got to work. They say their husbands like what they’re seeing.

Support the Twala Women
Part of the proceeds from every Charity Pot go to Lush's sLush fund. The Maasai women have used this money to invest in fencing to protect the aloe from being trampled on by wild elephants and camels.
Buy a Charity Pot

That’s because women like Florence Larpei and Priscilla Lekootoot are making money growing aloe, and selling the leaves to the British cosmetics company Lush.

More specifically it’s permaculture. “It’s a human system, a people system,” explains Letunyoi. “It’s about soils, the environment and fair share. How do we take care of ourselves? How do we get our food? And make sure that our soils are not degraded. We don’t use chemical fertilizers. We have to look at alternative livelihoods for all locals. We have to take care of the culture.” 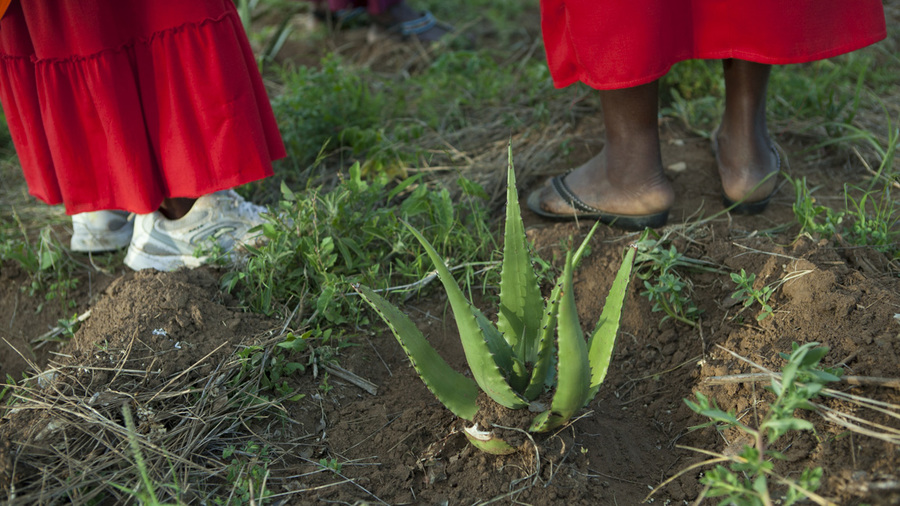 More than 140 Maasai women harvest aloe secundiflora leaves at the Twala Cultural Manyatta in Laikipia to export to LUSH cosmetics.

I really got along with Letunyoi. He reminded me of a Senegalese farmer I met in Togo, where I was a Peace Corps volunteer, who believed in this kind of farming system — only at the time, it didn’t have the name “permaculture.”

When Letunyoi helped create his project about two years ago, he says it was not easy to preach the gospel of permaculture to the Maasai. They’re pastoralists — herding cattle and goats and sheep — and not really prone to growing crops.

But among the Maasai, he says, “The women’s groups are easy to work with because they’re already organized,” he points out. “They are ambitious and they are patient.”

Aloe secundiflora leaves were already known to the Maasai as a cure to wounds, for deworming animals and people, and as the source of a local wine. All the womens’ groups needed, says Letunyoi, was a little nudge.

“The aloe was already growing all over and they know about it, so when we brought the idea of soap-making, selling leaves to whatever companies and other places, they clicked very fast and they said, ‘Yeah, this is exactly what we wanted — an alternative to pastoralism.’” 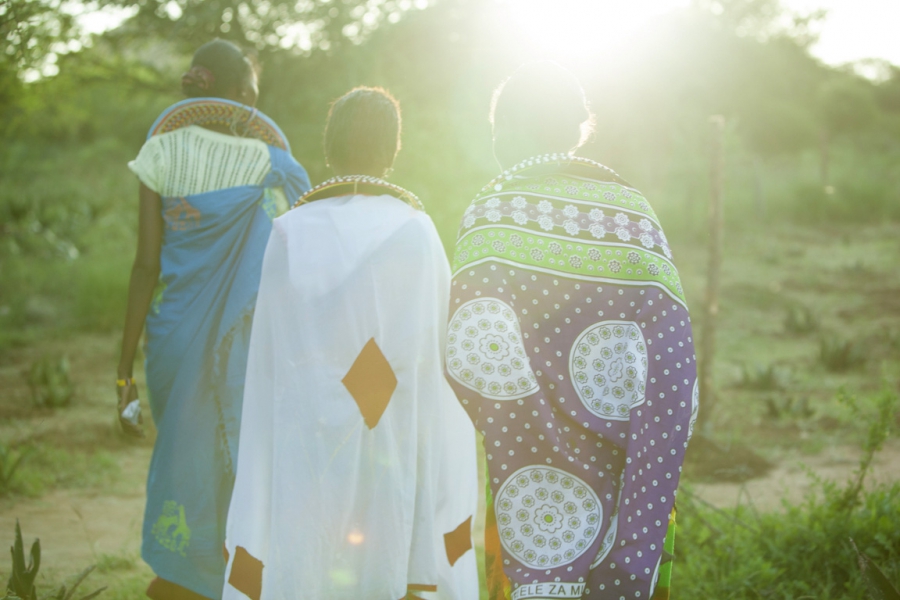 Some of the Maasai women working at Twala Cultural Manyatta

When Lekootoot showed me around the Twala aloe field, she did so with the reverence of someone who unlocked the gate to a personal Eden. After all, this field of aloe is bringing the Twala women more than $3000 each year. That’s more than double the per capita GDP in Kenya.

The Twala women are focused, they’ve got a vision that includes bee-keeping, growing food for themselves, selling aloe to Lush and making money. And they have managed to maintain their cultural connections to pastoralism.

It shows what can happen when you’re organized, and then you get a little boost from the outside.