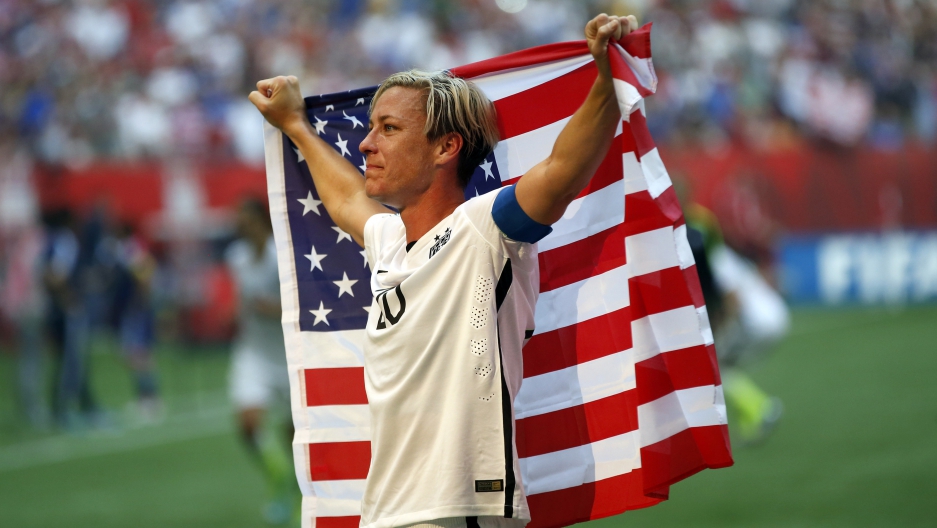 United States forward Abby Wambach (20) celebrates after defeating Japan in the final of the FIFA 2015 Women's World Cup at BC Place Stadium.

A sports great has called it quits — in the most unorthodox way.

Abby Wambach retired after playing her final match for the US Women's National Soccer Team. Feels strange just thinking about it.

Wambach joined the squad back in 2001. And since then, she's won nearly every accolade there is in women's soccer.

"Abby Wambach is an amazing soccer player, period," says sportswriter Joanne Gerstner. "She is the number one goal scorer in international play for male or female."

Gerstner says Wambach had a unique style. And it's going to be very hard for the US to find a replacement for her. Just take her size, 5-foot-11. Sometimes, that made her a good 10 inches taller than her competitors. "She brought an acrobatic, aerial game to the US. Basically, her teammates knew they could kick it up high and she'd go get it."

The unorthodox part? Before last night's game, Wambach suspended her social accounts, urging followers in a video to forget about her and find a new hero.

“Forget me. Forget my number, forget my name, forget I ever existed,” she says, in front of a locker bearing her nameplate. “Forget the medals won, records broken and the sacrifices made. I want to leave a legacy where the ball keeps rolling forward. Where the next generation accomplishes things so great, that I am no longer remembered. So, forget me. Because the day I’m forgotten is the day we will succeed.”

Forget her? Not gonna work. Even President Barack Obama saluted her in a tweet.

Congrats on a great career, Abby Wambach. For the goals you’ve scored & the kids you’ve inspired, you’re the GOAT! pic.twitter.com/Kud56ChsBO

Wambach has been a bridge of sorts. She's the link between the first stars of US soccer, players like Mia Hamm and Julie Foudy, to the current group led by Sydney Leroux.

Numerous highlights compose Wambach's career. But if Gerstner could pick just one, it was the "header heard around the world." It happened at the 2011 World Cup in Germany. At the end of the match against Brazil, the US was losing 2-1. Time was ticking down. And with mere seconds left in the match, well, Wambach made a goal that was pure "Wambachian" greatness.

Gerstner was lucky enough to watch it live. "It was a rocket. There was no way of stopping that goal. It was like, 'BAM, we're done.'"

Wambach also stood up for woman's soccer. She tried to force FIFA to play the most recent World Cup on grass, instead of turf. The effort eventually failed. But she brought a huge spotlight to the problems of how the corrupt organization treats its female athletes.

Unfortunately, Wambach ended her career on turf. Her final match is at the Mercedes-Benz Superdome in New Orleans. But she didn't let that bother her. She's a professional. The professional we'll miss watching sky into the air, tracking down a cross.