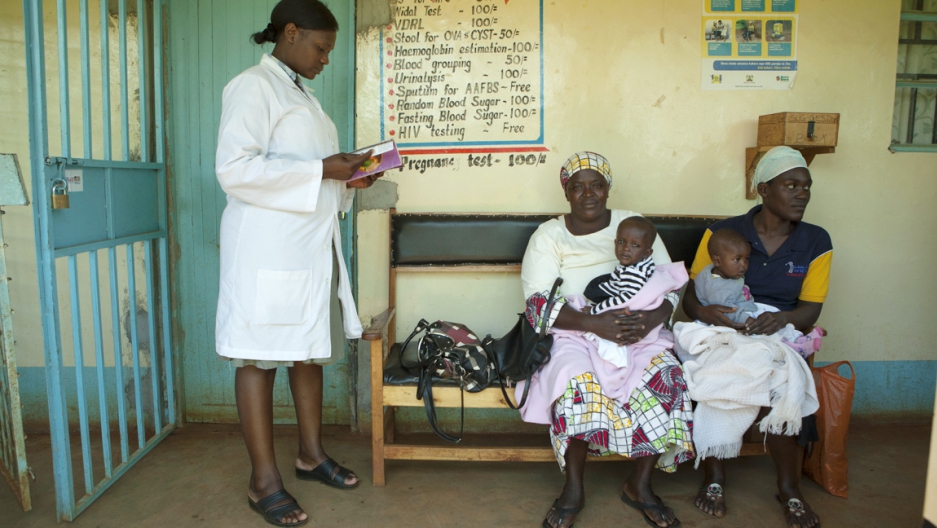 New mothers and their babies wait to see a doctor at the Othoro Community hospital in Homa Bay, western Kenya.

There is a superstition in western Kenya, in the lush area that borders Lake Victoria. If you are a woman and become pregnant, you do not talk about it because if you do, you will lose your child.

The downside of keeping it secret is that the mother very likely will not make any prenatal visits — maybe won’t even give birth in a hospital.

In an area of the country with a high incidence of malaria, not to mention HIV rates of 27 percent, that puts fetuses in jeopardy. 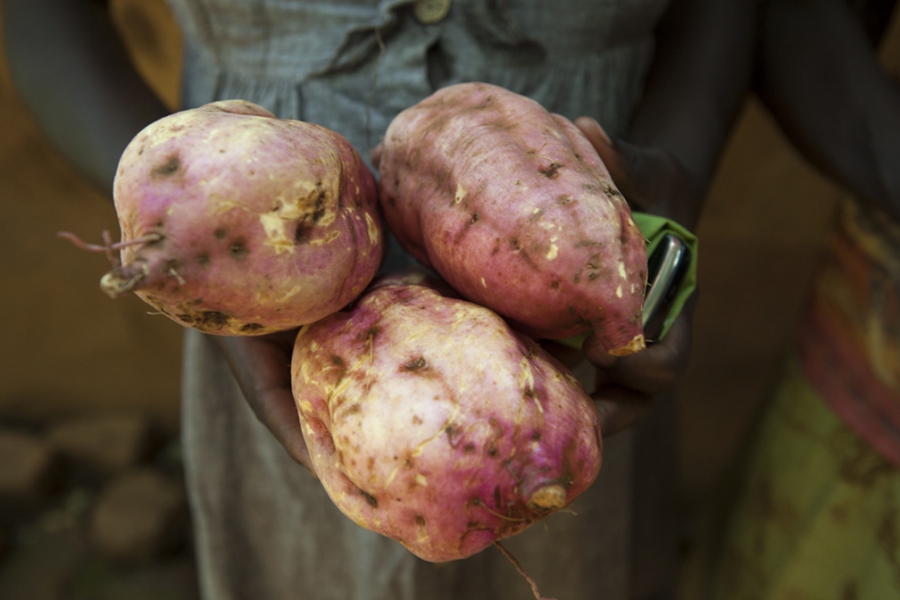 Beatrice Otieno holds some of the orange flesh sweet potatoes she's been growing with the aid of the SUSTAIN (Scaling up Sweetpotato through Agriculture and Nutrition) project.

But even if no one was superstitious, clinics are often far from home for many women. And they’ve got chores that precede a prenatal visit.

Charity Navigator suggests using micro-lending site Kiva to directly support rural farmers like Chepngetich. A loan of $800 helps this green tea and dairy farmer who is supporting her siblings and parents pay for one cow.
Lend Her $25

If it hadn’t been for an unfamiliar variety of sweet potato, 27-year-old Beatrice Otieno would likely be giving birth to her third child at home. That home is a mud brick shack. It’s hot inside, and the coolest spot is the dirt floor. It’s not where a child is going to have the best chances of success on his first day in the world.

Not long ago, she heard that if she went to the hospital for pre-natal visits, she would receive coupons for orange flesh sweet potato vines to plant in her yard. She bit.

The coupon would entitle her to the plants at a subsidized cost. They would supplement her and her family’s diet, and anything they had left over she could sell. 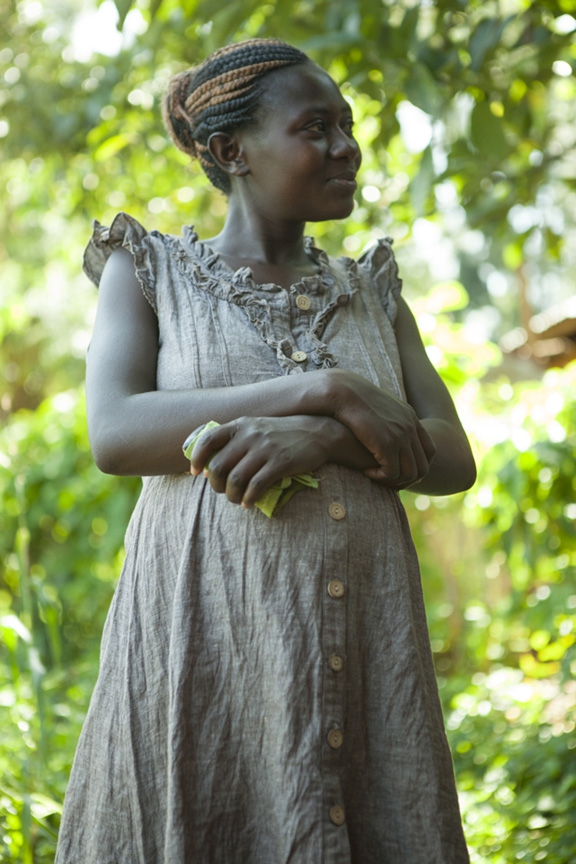 Unlike her previous two pregnancies, Beatrice Otieno will deliver her third child at a local hospital.

“Because I know I can get sweet potatoes from prenatal visits,” she told me in Swahili, “it made me understand the importance of giving birth at the hospital.”

Beatrice Otieno lives in Homa Bay, Kenya, not far from Lake Victoria. And two years ago, Homa Bay became one of the places where a project was launched to introduce the orange flesh sweet potato.

That is happening through the American health organization PATH, the Kenyan government, and a project called SUSTAIN: Scaling up Sweetpotato through Agriculture and Nutrition.

There are always doubts when an unfamiliar crop is introduced for the first time. Kenya has local sweet potatoes, but these varieties are white and yellow. People like them.

But Beatrice told me she likes the orange flesh variety more. A lot of the people in Homa Bay said the same.

That’s a good thing. Because the whole idea of SUSTAIN was to make the sweet potato both a nutritional savior and an incentive.

On the nutrition front, it addresses health needs for pregnant women. It’s loaded with Vitamin A, an immunity booster, great for vision and crucial for organ development in the fetus. The orange flesh variety also provides a defense against disease for people who are HIV positive. 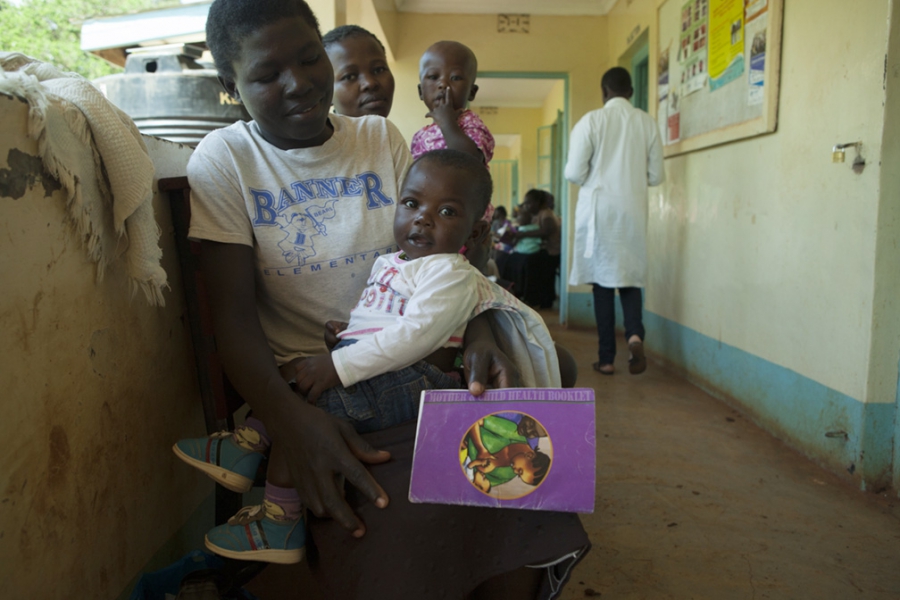 Mothers line up for post-natal visits at the Othoro Community Hospital in Homa Bay.

When I arrived at the health clinic in Homa Bay, I saw the dividends. The veranda was packed with patients. Some were there for typical outpatient needs: small injuries and illnesses. But a lot of them were expectant and post-natal mothers, and were there for a checkup and the coupons.

Batrise Akinyiopyio lives in the community and works as a liaison between the clinic and the mothers. She pulled out a white board and showed me an array of numbers. The crucial point, she said, is that the hospital used to give out Vitamin A supplements. Then the stock ran out.

“But when the orange flesh sweet potato came into the existence and we taught the pregnant mothers on the importance of orange flesh and vitamin A,” explained Akinyiopyio, “we realized that very many children are consuming orange flesh at the household levels.”

We know the orange flesh sweet potato in the US. (Heck, at Bartley’s Burger Cottage in Harvard Square, there are as many sweet potato fries orders as standard ones.) Agronomists will tell you that even though it’s a tuber, it is not technically in the potato family. Columbus found it, most likely in the West Indies, and from there it made its way to the US. It was made famous by George Washington and later by George Washington Carver. It’s native to the Western Hemisphere, and even though it’s not in the potato family, it’s introduction in Africa is being done in collaboration with CIP — the International Potato Center in Lima, Peru.

Support the women of Homa Bay

PATH has an accountability + transparency score of 100 on Charity Navigator.
Contribute

David Elijah is a skilled local farmer who was tapped to be the local super-source of the orange flesh sweet potato vines. He proudly showed me his starter field and the nursery where the first seeds are grown.

Hellen Nyongesa-Malava works for PATH in Homa Bay. She says that “part of the reason why (Homa Bay) was identified as a site is because of the willingness of households and men to show their women where they can cultivate the vines that they are given.” 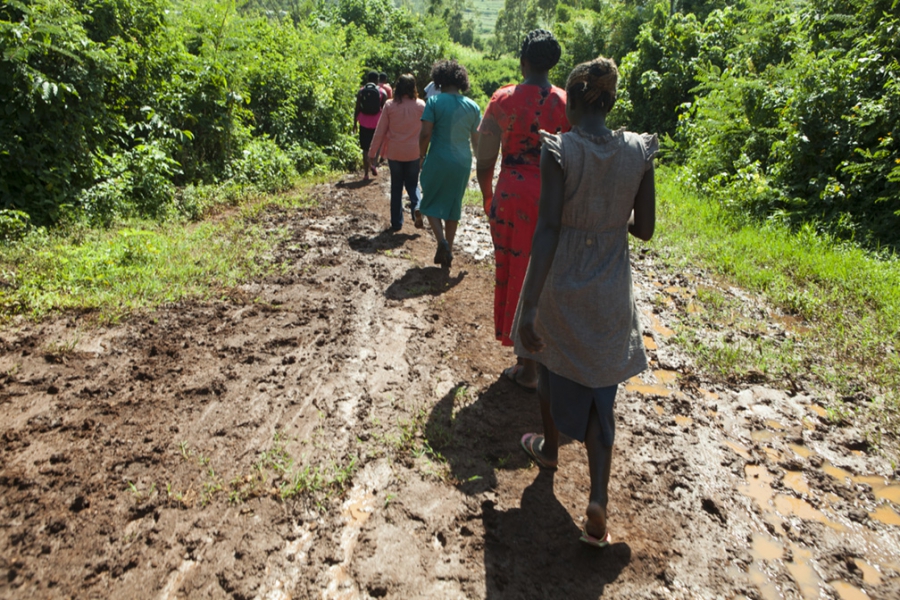 Beatrice Otieno follows others to the field where she grows orange flesh sweet potatoes.

In a country where women own just one percent of the land, that’s a tally in the plus column.

As for turning their surplus sweet potato crop into a profitable business, that's a little harder to judge. It's still early days of course, but in Beatrice Otieno's case, sweet potato sales have not noticeably lifted her out of poverty. According to Rikka Trangsrud, PATH Kenya's community program coordinator, there is some clear success. She notes the more nutritious sweet potatoes are now accepted because you can find them in the produce section of supermarkets like Nakumatt

At the hospital in Homa Bay, the proof of concept is in the number of women who are showing up for prenatal visits. And every day there are more women taking the same interest in sweet potatoes — and the health of their babies.