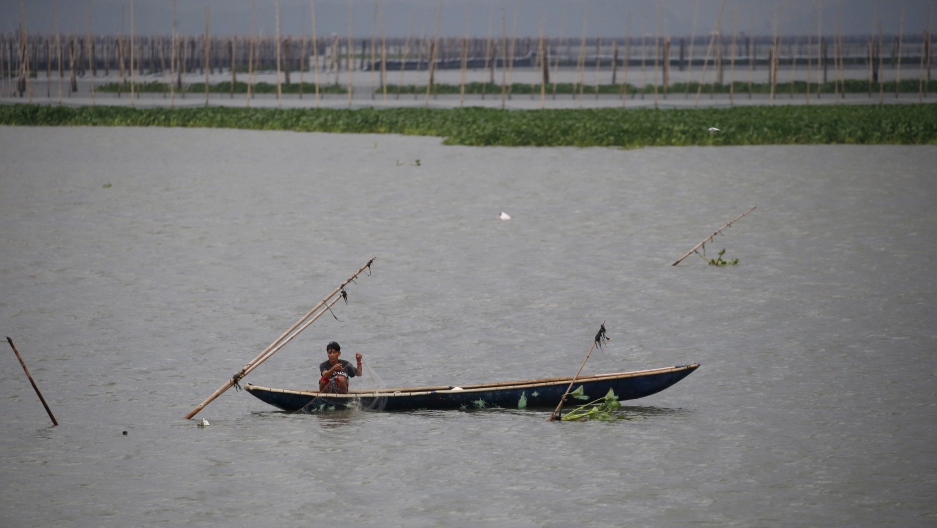 A resident fishes in the waters near Manila, Philippines, amid heavy current and winds brought by Typhoon Melor in some parts of the country. Wide areas of the central Philippines were plunged into darkness on Tuesday as Melor barreled into the coconut-growing region, causing flooding, storm surges and forcing almost thousands of people to evacuate their homes.

More than 700,000 people had evacuated the central Philippines as Typhoon Melor rolled onto the island of Samar. Just three years ago Typhoon Haiyan devastated parts of that same island.

Typhoon Melor's approach on Monday came less than 24 hours after world leaders reached an historic agreement on climate change — and it serves as a harsh reminder of the work that remains to be done adapting to a world with rising temperatures and stronger storms.

Mayor Stephany Uy-Tan has big plans for Catbalogan, Samar’s capital city. Two years ago, when Haiyan was bearing down, the city evacuated its coastal slums, or barangays — something they just had to do again for the current typhoon.

Like Haiyan, Melor largely spared the small city of Catbalogan, but the city evacuated more than 1,500 people in anticipation of a more direct hit. Right now Mayor Uy-Tan is helping Catbalogan weather the storm. Just last week, at the climate conference in Paris, she worried about future storms.

“Catbalogan is three-in-one: we are very vulnerable to storm surge, flooding and landslide,” says Uy-Tan, who at 32 is Catbalogan's youngest and first woman mayor. “I can just imagine if we have super typhoon number five, I don't know where we will go."

“That's the only way that the city could be safe,” she says.

Stephany Uy-Tan is at the head of the table, planning disaster response in Catbalogan.

Catbalogan is courting investors for the project, which could cost nearly $90 million.

“We are very small," Uy-Tan says. "We lack resources. We lack the technical aspect. And so we need help, technically and financially. We're not begging for ourselves as mayors, but we're begging for our city and for the rest of the world.”

Uy-Tan says she's not asking the world to bail out her city. She just wants the international community to help her reach investors and private developers.

That puts her in an increasingly common position: Uy-Tan can't afford to defend her city from rising seas and superstorms, but she also she can't afford not to. Worse, cities like Catbalogan aren't just in need of long-term planning — they're already bearing the brunt of climate change.

There's the usual route of seeking money through United Nations funds and other international aid. Most of those proposals go unanswered, says Meenakshi Raman, legal advisor to the Third World Network and a member advising the UN on its new climate-finance arm, the Green Climate Fund.

“Many of us are accessing that kind of money, but the pot is very little,” Raman says. “There’s a high demand. There’s more demand than there is supply of money.”

It's hard to get access to that money, Raman says, because the UN takes its time vetting the applicants to make sure they'll spend the money correctly. The problem is even worse for projects whose aim is to help countries “adapt” to climate change, Raman says, because the UN's more focused on “mitigation,” or lessening the amount of carbon emissions in the first place.

“That’s a problem," Raman says. "Because for many developing countries, they have no option but to adapt. If there's a flood, there's a cyclone. If your agriculture is affected, if your coastline is impact and your sea level is rising, you have no choice but to divert your national budgets to these.”

And that makes the problem even worse.

In the meantime, Joan Clos, executive director of UN Habitat, says cities might be able to just grow their way out of this vicious cycle — if they plan well and watch out for inequality.

“Urbanization generates value,” Clos says. “The money should come out of the endogenous economy. You cannot pretend to address the problem of the countries only by foreign aid. This doesn't work. It's not going to work.”

Over the next century, whole cities are going to be washed away by rising seas if we don't prepare — and Clos says the international community can't fix that.

But the Paris agreement could bring a lot more private money into play. In a press conference just after the deal was inked, US Secretary of State John Kerry said, it sends a clear signal to the market: invest in climate solutions or get left behind.

“That will begin to shift the entire marketplace,” Kerry said. “CEOs will begin to be asked the question, ‘How are you doing for your shareholders relative to your responsibilities to live up to this?’ It’s a sea change.”

That sea change can’t happen fast enough for those most vulnerable to climate change.

“Look at the pension funds in the world,” says James Alexander, head of finance and economic development for a global consortium of cities called C40. “If we can find ways to get things like pension funds, investment trusts, if we can get that money to flow in the right direction, not only will we be catalyzing the market, but we'll be creating a whole new sector of green infrastructure that there is enough money in the world to pay for.”

There are trillions of dollars in pension funds looking for safe, long-term investments. Infrastructure projects are already attracting this kind of investment, so why not green infrastructure and projects to make cities more climate resilient?

Sean Kidney has no doubt that this is where we're heading. When it comes to climate change, the world finally agrees on the scale on the problem and, he says, we know what we need to do. Best of all, Kidney says, the world is awash in capital.

“The capital's ready to flow, but all this stuff is risky and new,” Kidney says. “So pension funds and insurance funds are not allowed to take those risks. They have rules that have been set by rich governments. To be able to get around that, public sector bodies — especially development banks — have to bridge those risks, at least until there's enough credit history and credit transparency to be able to convince Standard & Poor's or Moody's that it's not a risk. And that's what we have to do in the next five years.”

Not everyone's so excited about the prospect of globetrotting financiers funding infrastructure in developing countries. It has the whiff of colonialism, and Meenakshi Raman of the Third World Network worries it could entrench global inequality.

Joan Carling is head of the Asia Indigenous Peoples Pact, and she says international capital might just make it easier for developer and financiers to pile onto supposedly green projects that jeopardize indigenous peoples’ land.

“The way it's being approached is business as usual,” Carling says. “That also impacts our livelihoods.”

The fact that businesses and banks might be getting bullish on climate change could still be good news for Stephany Uy-Tan, the mayor of Catbalogan in the Philippines. She’s plotting evacuation routes for sea-level rise that could be decades away — and for storms that could pick up tomorrow.

She’ll take any help she can get. And she needs it now.

This story was co-produced by our partners at The GroundTruth Project.

Update: A previous version of this story included a photo incorrectly credited to Chris Bentley. The image was provided courtesy of Stephany Uy-Tan.