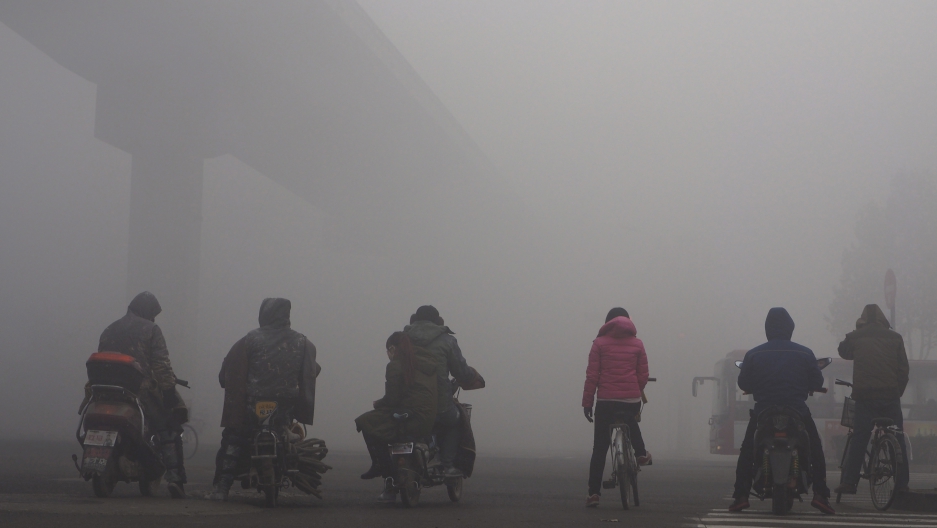 Residents on their bicycles and electric bikes wait for the traffic at an intersection amid heavy smog in Shijiazhuang, Hebei province, China, December 10, 2015.

Over the weekend at the COP21 summit in Paris, nearly 200 countries reached a landmark agreement to fight climate change. Though that is welcome news to much of the world, the nations that are actually most vulnerable to the effects of climate change may not feel the benefits of COP21 for many years.

Pollution is currently the single largest cause of the death in the developing world — about one in seven people in low income countries die from pollution.

Richard Fuller, an environmentalist and author of "The Brown Agenda: My Mission to Clean Up the World's Most Life-Threatening Pollution," is trying to spread awareness about the pollution problems facing the poorest people on the planet.

Through stories of specific individuals and families, Fuller's book takes readers to “brown” sites — places where man-made pollutants have spread and poison millions of people each year.

After visiting many of these brown sites firsthand, Fuller founded Pure Earth, a non-profit that organizes large-scale clean-ups in the most impoverished areas on Earth.

“The issue here for us is about health, especially health impacting children,” he says. “A lot of these acutely contaminated places have grown in numbers so enormously over the last 20 or 30 years as we’ve seen low and middle income countries develop quite dramatically.”

To date, Fuller and the Pure Earth team have cleaned up more than 75 sites worldwide and have helped save four million people. He argues that pollution is now the “single largest public health problem in the world.”

“It far exceeds the public health problem of malaria, HIV or tuberculosis,” he says. “In fact, it is a greater risk to health than those three [things] combined, times three. If you break it down, someone dies because of pollution about every four seconds.”

Since its inception in 1999, Pure Earth has worked on the ground in 20 countries to improve human health by implementing clean up programs in places that Fuller calls “acutely toxic.”

“We’re only working in places that are so extraordinarily polluted that if they were here in the US, they’d be front page news for months and months,” he says.

One such place is the Zambian city of Kabwe — about 200,000 people there have been exposed to lead poisoning from an abandoned smelter that operated from 1902 to 1994.

“The lead safe level that’s been given out by the US EPA and WHO is five micrograms per deciliter. Above about 60 micrograms per deciliter you have a far increased chance of dying, but between five and 60 you have a lot of mental retardation, a lot of developmental disabilities, a lot of neurological damage from lead,” says Fuller. “The average blood lead level for kids in this particular town is about 75 micrograms right now.”

People in Kabwe still dig through factory waste piles — many have neurological damage and will lose consciousness while they dig. The government of Zambia has borrowed money from the World Bank to clean up the site.

But beyond relying on governments and nonprofit groups, Pure Earth also works with locals who rely on toxic sites to make a living. In Senegal, Pure Earth coordinated with a number of women who were badly contaminated after being part of an informal network that would search for used lead-acid car batteries to recycle. Pure Earth taught the women how to grow and manage small gardens, and sew so they could independently maintain an income stream.

“For example, people will be recycling car batteries and doing it in a way where they’re not aware of how toxic it is, but they’re spreading the contaminants throughout their neighborhoods,” Fuller says. “When they’re shown alternate ways to be able to do this that are non-toxic, often they’ll also need to find additional employment opportunities so their livelihoods are not damaged.”

Over the last several decades, Fuller says that the global environmental focus has shifted towards biodiversity and climate change — often at the expense of the anti-pollution movement.

“Pollution has just simply dropped off the map,” he says. “This is just an extraordinary result, and one we really need to turn around.”