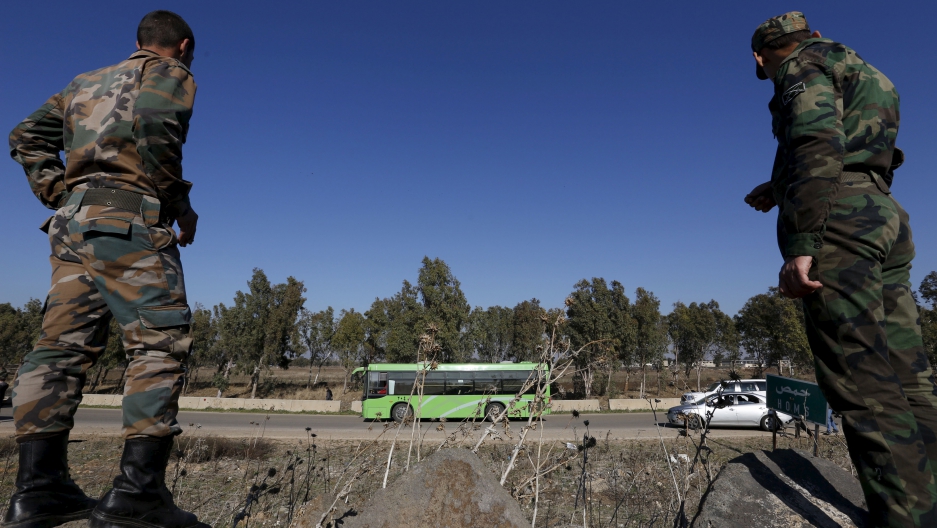 Syrian Army forces look on as buses leave district of Waer during a truce between the government and rebels, in Homs, Syria.

Homs is coming back to life. Well, parts of it are, at least.

After three years of violence, the last of the rebels have given up. Buses of people streamed out of the city last week, protected by a local ceasefire agreement.

“It is a city both of light and of dark,” says the BBC’s Lyse Doucet, who was in Homs last week.

Doucet has traveled to the area before, and she says the feeling of the city is different than before. In the midst of the fighting, she says, the main hotel in the city was packed with military observers, aid workers, and spies. Now there are Christmas lights, social receptions and bustling shops. Vendors sell everything from lingerie, to childrens clothes to cell phones.

But that’s not the full story.

“There is still great darkness in Homs,” she says. “There are vast neighborhoods which lie in utter, complete ruin … [There is] not a building standing. Every building is charred, gutted and pockmarked with bullet holes, or flattened into these gray cement pancakes by the ferocious bombardment.”

"You can go through some neighborhoods in Homs and think that there was never a war at all. The traffic is bustling, the traffic lights are blinking, the pizzarias are doing brisk business, the cafes are full, people are out in the markets — and then you go to another neighborhood which is completely and utterly destroyed."

Doucet made sure to visit one place in the old city in particular — the Saint Mary Church of the Holy Belt — which is located in an area that saw particularly intense fighting. Back in 2014 when she visited, the building had been emptied out, and the only light came from visitors who were just happy to see the structure hadn't been flattened.

But today, the scene at the church is very different.

"It's starting to look a lot like Xmas" — even at Saint Mary Church of the Holy Belt — Old City #Homs #Syria pic.twitter.com/qlfiYvLKV2

"The church is uging people to come back," she says. "[But] it will take a long time time before it returns to anything that could ever be described as normal."

This is especially true in the neighborhoods that will likely be left demolished. These areas are predominately Sunni Muslim areas, and were seen as the backbone of the uprising.

The physical destruction is only one layer of what's happened in Homs. There has also been a destruction of the city's social fabric, Doucet says. Before, the city was seen as a "microcosm of Syria" because there were Sunnis, Shias, Alawites and Christians all sharing the same space. Today, it's torn.

"There's still a lot of pain in the city, even as it begins to rebuild in some neighborhoods, but not all."