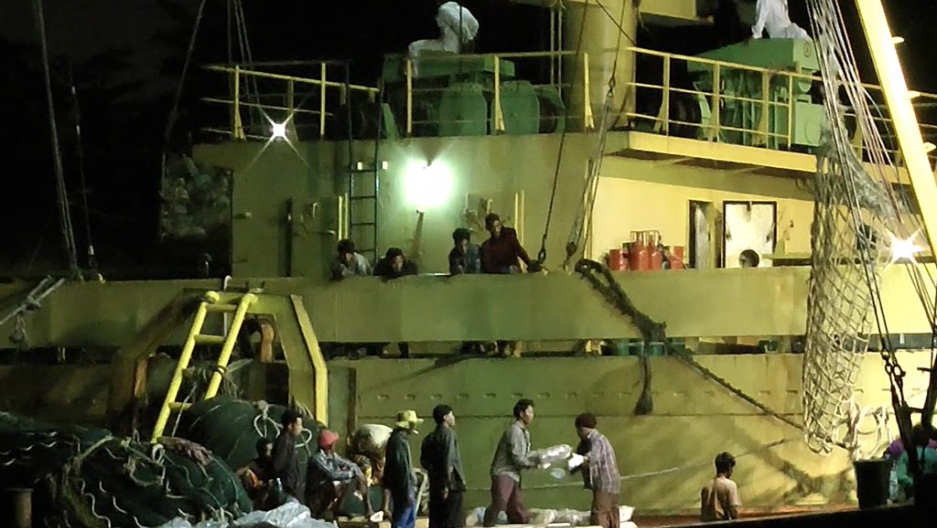 AP tells the dirty story behind seafood sold in America: Slaves may have peeled your shrimp.

This story could change the way you look at that shrimp cocktail this holiday season.

Turns out, a lot of the peeled shrimp that American customers put on their plates comes from Thailand. And it's often the product of slave labor, according to a new report from the Associated Press.

By slave labor, the journalists mean slave labor. “Earlier this year we reported that men were put inside cages when their shrimp boats came in to shore,” says Martha Mendoza who’s part of the AP's investigative team. “Our most recent reporting looks at people who are locked inside of shrimp peeling sheds in Thailand and forced to peel shrimp that enter the supply chains of popular US stores.”

These slaves are typically paid few or no wages and they owe large amounts of money to their "employers" because they’ve have been tricked or lured away from their home countries — Myanmar for example — for a job they were promised would allow them to send money home to their family.

“When they get there, they find out that they owe somebody as much money as they've been sold for, and they have to work to pay that off as well as pay for their lodging and food and they're not allowed to leave until they pay that off," Mendoza explains. "The debt can be insurmountable.”

Here’s a brief excerpt of the AP’s latest story:

Every morning at 2 a.m., they heard a kick on the door and a threat: Get up or get beaten. For the next 16 hours, No. 31 and his wife stood in the factory that owned them with their aching hands in ice water. They ripped the guts, heads, tails and shells off shrimp bound for overseas markets, including grocery stores and all-you-can-eat buffets across the United States.

After being sold to the Gig Peeling Factory, they were at the mercy of their Thai bosses, trapped with nearly 100 other Burmese migrants. Children worked alongside them, including a girl so tiny she had to stand on a stool to reach the peeling table. Some had been there for months, even years, getting little or no pay. Always, someone was watching.

Conditions out on shrimp boats or inside the peeling sheds are not pretty. “(The peeling sheds) are filthy. There are toilets overflowing, they are unhygienic. There's children — one girl was so tiny she had to stand on a stool to reach the peeling table. People have been there for months, and always somebody's watching them.”

There have been other NGO reports alleging that the global seafood industry uses a lot of modern-day slavery. Mendoza says a team of AP journalists has been working throughout the year to “identify exactly where those products end up, what supply chains they go to," she adds. "To do that we actually had to stake out and follow products from the processing sheds. So we would drive behind a truck with our own video and photo, and take pictures of where it goes.”

Here’s a list of where the AP says shrimp processed by slave labor in Thailand, go:

U.S. customs records show the shrimp made its way into the supply chains of major U.S. food stores and retailers such as Wal-Mart, Kroger, Whole Foods, Dollar General and Petco, along with restaurants such as Red Lobster and Olive Garden. It also entered the supply chains of some of America's best-known seafood brands and pet foods, including Chicken of the Sea and Fancy Feast, which are sold in grocery stores from Safeway and Schnucks to Piggly Wiggly and Albertsons. AP reporters went to supermarkets in all 50 states and found shrimp products from supply chains tainted with forced labor.

On Tuesday, Red Lobster said it checked its supply chain. "We are confident based on our findings and assurances from Thai Union that our seafood supply was not associated with the abusive pre-processing facilities," the restaurant chain said in a release.

For US consumers, the AP report might be a little confusing. What’s a consumer to do? Is there a way to discern whether the shrimp you purchase in a store comes from one of Thailand’s infamous peeling shacks, where children and adults are treated like slaves?

Mendoza says there's no way to track a particular shrimp from an abusive peeling shed to a supermarket store. “However if you want to assure yourself that you are having shrimp that has a clean supply chain, you can buy local."