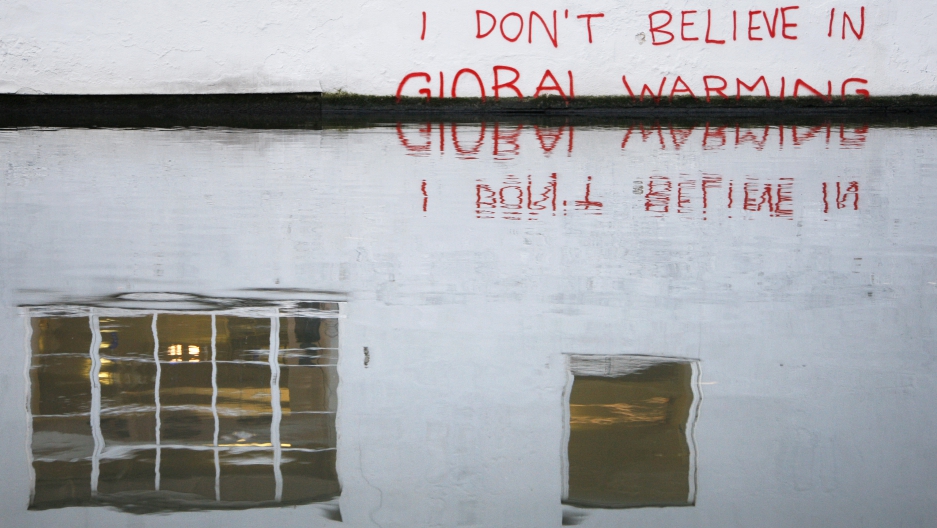 Graffiti art on a wall next to the Regent's Canal in London in 2009. Local media attributed the work to acclaimed British street artist Banksy.
Credit: Luke MacGregor
Share

LIMA, Peru — The world has been celebrating the groundbreaking United Nations climate deal reached in Paris over the weekend.

For the first time in history, all countries, poor and rich, have committed themselves to reducing their greenhouse gas emissions, the driver of global warming.

US President Barack Obama described the agreement as “ambitious” and a “turning point for the world” in the fight against climate chaos.

Even some of the people most threatened by a planet heating out of control gave the deal the thumbs up. Olai Uludong, climate change ambassador for the tiny island state of Palau — which faces a very real threat of disappearing under the rising Pacific waves — said: "Our head is above water."

But is it really all good news? Here’s a look at what was actually agreed to in Paris, and how much of an impact it will have on our collective future.

This is the big one. Since the Copenhagen climate summit in 2009, the United Nations negotiations had a stated objective of keeping the rise in average global temperatures to 2 degrees Celsius (3.6 degrees Fahrenheit) above pre-industrial levels. That was thought to be the threshold to avoid truly catastrophic impacts, including seeing cities and large tracts of land around the globe become uninhabitable due to rising seas, drought, storms and flooding.

But scientists and others have increasingly been warning that 2 degrees Celsius is too high. The Paris deal now formally commits its 196 signatory nations to try to keep the temperature rise to a more ambitious 1.5 degrees Celsius. To achieve that goal, governments also agreed to aim for “net-zero” greenhouse gas emissions by the second half of the century — an effective halt to human-made pollution by balancing remaining outputs (like burning coal) with inputs (like planting forests). Primarily, though, the goal will require the “de-carbonization” of the world economy: replacing fossil fuels such as oil, coal and gas with renewable forms of energy like wind and solar power.

Yet the biggest catch of the Paris deal is that existing commitments from signatory countries to reduce their national carbon footprints will still take the world past that 2 degree Celsius threshold. According to some analysis, it could even put us over 3 degrees. That’s where the other key component of the Paris deal comes up: an ongoing commitment from the nearly 200 governments to continually review their commitments and tamp them down over time.

In practice that means two things: First, countries will be required to update their national inventories of carbon emissions, and targets set to reduce those emissions, every five years. Second, they’ll be expected to do so in a transparent way that will be evaluated by independent panels of experts. Those expert will have the final say on whether a country is living up to its targets or is breaking its promises.

And that leads to the second biggest catch of the Paris deal: Although parts of it are legally binding — countries are obliged to hit their individual quotas — it contains no mechanisms for punishing nations that miss their carbon reduction targets. Instead, accountability will come in the form of the transparent and public five-year review process. In other words, the deal will rely on the threat of “naming and shaming” governments that don’t do their part.

For some critics, that effectively renders the Paris deal “toothless.” The counter-argument views the accelerating impacts of climate change over the coming years as creating an inevitable imperative that will make it harder and harder for governments to justify failing to take strong action.

In his remarks on Saturday, Obama tackled that criticism head on. “We’ll have a strong system of transparency, including periodic reviews and independent assessments, to help hold every country accountable for meeting its commitments,” the president said. “As technology advances, this agreement allows progress to pave the way for even more ambitious targets over time.”

The Paris agreement formally accepts, for the first time, that many of the poorest nations will suffer “loss and damage” as a result of climate change, even if the 1.5 degrees Celsius target is met. That could take many forms, including crop blight, flooding or the spread of tropical diseases.

On the one hand, the Paris deal clearly establishes that rich nations, which historically have emitted the most carbon, are not legally liable for the loss and damage. On the other, it redoubles a previous commitment from developed countries to mobilize $100 billion a year from 2020 to help poorer nations cope with climate change. Those funds will include private investment. The Paris text now establishes that from 2025, the amount will be even higher.