Shim Hyun-chul steering a video drone to record the attack drone he build with his students.

When traveling by train in South Korea, you can’t go any further north than Baekmagoji Station. It’s then a 15-minute walk from the station to the demilitarized zone (or DMZ). After that, it’s all rice paddies and landmines, leading up to North Korea.

Even though the two Koreas signed a cease-fire agreement back in 1953, shots are still fired across the border. And according to Seoul’s Ministry of National Defense, Pyongyang dispatches drones over the DMZ, too.

In September, military officials here reported that they spotted a North Korean drone in South Korean territory. A helicopter and fighter jet were scrambled to intercept it, but the unmanned aerial vehicle (UAV) got away.

Others haven’t made it back. Since 2014, the Defense Ministry says it has recovered four crashed North Korean drones.

Martyn Williams, who runs the North Korea Tech blog, believes these aircraft were on a recon mission.

“It looks like they were flying into South Korea to take photographs of the border area, which is where, of course, South Korea and the United States have a lot of troops and a lot of military equipment,” he says. “They did have these rather expensive digital cameras on board, probably cameras that cost about several thousand dollars.”

But it’s not only the border that North Korean drones have flown over. The Defense Ministry says at least one of these UAVs made it all the way to downtown Seoul.

Local media went into panic mode. On the front page of one paper was a picture taken from the seized drone. The headline said it was just 20 seconds away from the President’s house. This part of town is also home to the American Embassy and the US Ambassador’s residence.

I’ve seen two of these drones in person. They’re painted sky blue with wingspans of about 6 and 8 feet. One was airplane-shaped, the other a glider.

Boo Hyung-wook, a researcher at the government-affiliated Korea Institute for Defense Analyses, has seen the UAVs too. He says they’re primitive, the kind you can make with open-source technology. But he says the Defense Ministry believes these aren’t the only type of drones that North Korea possesses.

According to Boo, they have 320 drones and 10 of them are American-made. That includes the Raytheon Streaker, a target drone that was first made in the 1970s and is no longer in production. Pyongyang is believed to have acquired those from Syria.

Boo says the regime uses these old American, as well as Russian drones, as models to make its own modified UAVs — like the ones seen in the Pyongyang military parade. He says they’re designed to carry one kilogram, or about two pounds, of TNT.

But that’s not his biggest concern.

“What if they can carry chemical weapons?” he says, pointing out that one kilogram of anthrax could kill up to 10,000 people.

That scenario is still a ways off, according to long-time North Korea watcher Joseph Bermudez, chief analytics officer at All Source Analysis in Longmont, Colorado.

He says for now it doesn’t seem that North Korea’s drones are capable of relaying real-time images back to base or flying far distances. But the US and South Korean militaries would have a problem on their hands if Pyongyang were to acquire the technology to do so from allies like China or Iran.

Bermudez says Washington is more concerned with North Korea’s nuclear weapons and long-range missile programs than its drones. Plus, there’s no foolproof way for the US or South Korea to prevent Pyongyang’s surveillance UAVs from infiltrating southern airspace. He says it would take a combination of better intel, radar systems, and weaponry.

The South Korean military has its own plan. It’s contracted with a local university to develop technology that could be used for a fleet of attack drones. 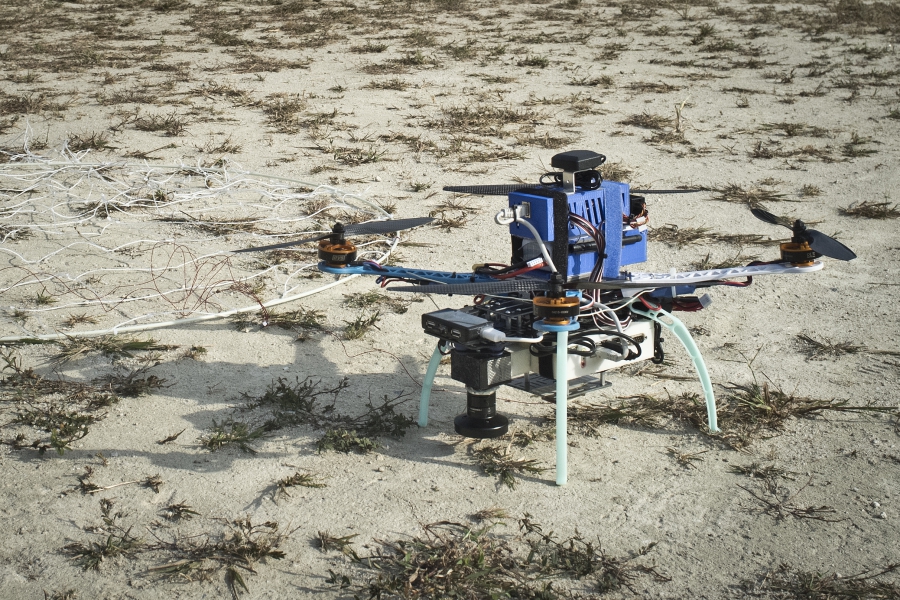 The attack drone developed at KAIST in South Korea. It's an early prototype that one day might fight drones from North Korea.

A soccer field at the science and technology graduate school KAIST is where Shim Hyun-chul, head of the unmanned systems research group, and his students are testing their quad-rotor UAV.

One attack drone works in tandem with another UAV. They detect the enemy aircraft, which is hovering on the opposite side of the field, and go after it together. The smaller of the two releases a nylon net over the enemy drone in mid air. The net gets caught in the rotors and it crashes to the ground. The second drone then delivers its payload — a small vehicle that picks up the fallen UAV and brings it back to base.

Shim says neutralizing drones with other drones could be the safest way to combat invading North Korean UAVs. Many other methods, like using bullets or lasers, wouldn’t be safe in densely populated areas. The Seoul metropolitan area is less than 40-miles south of the DMZ and is home to about 25 million inhabitants.

Defense analyst Boo Hyung-wook says that if fighting were to ever break out here, drones could be at the forefront on both sides. And because urban warfare is so complex, they would need drones of all sizes, from the very large, to the very, very tiny.

And as more North Korean drones make it across the border, or are put on parade, Boo says South Korean and American forces need to bolster their UAV programs faster than North Korea enhances its own.