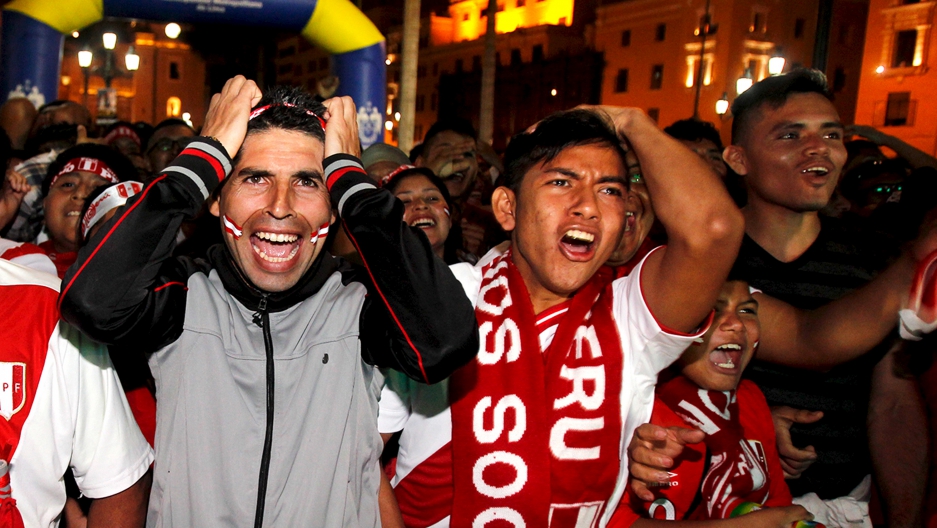 LIMA, Peru — The US Justice Department’s ongoing probe into alleged corruption at FIFA, world soccer’s governing body, has fans around the world rejoicing.

But there may be one country where that fervor is most intense: Peru.

Manuel Burga, the deeply unpopular former head of the Peruvian Football Federation (FPF by its Spanish initials), was among the latest batch of soccer administrators arrested late last week. Images of the 58-year-old doing the perp walk in a flak jacket and handcuffs were greeted here with almost universal cheering.

Burga was head of the FPF from 2002 until 2014, when he was forced to stand down amid a huge public outcry over his mismanagement of Peru’s most popular sport. Peruvian soccer fans march during a protest against Peruvian Soccer Federation leaders in Lima, Sept. 26, 2013. The protesters claimed that the federation president Manuel Burga and his executive committee are directly responsible for the national team failure to qualify for the last three soccer World Cups tournaments.

He was detained at his house in Lima after Interpol issued an arrest warrant, at the request of US Attorney General Loretta Lynch, accusing him of taking multi-million dollar kickbacks for broadcasting and marketing rights to games.

Despite having a soccer-mad population of 30 million, Peru has not been to the World Cup since 1982, when a golden generation of players drew 1-1 with mighty Italy.

Since then, Peruvians have gradually become more and more resigned to their national side flunking the South American qualifiers for world soccer’s premier tournament every four years.

To really rub it in, Peru’s northern neighbor Ecuador has gone to the World Cup multiple times, and even Bolivia did so back in 1994. Both nations have much smaller populations than Peru.

And Peru’s most bitter rival, Chile, is the current South American champion. Peru's Paolo Guerrero (L) goes for the ball under pressure from Paraguay's Pablo Aguilar during their 2018 World Cup qualifying match at National Stadium in Lima, Nov. 13, 2015.

Fans here have long accused Burga of frittering away funds for community soccer (even children’s teams) and generally running the national game into the ground.

The dismay has been so intense that in one poll Burga received just 2-percent backing within his own country.

In another, 93 percent expressed their disapproval of his performance.

By those numbers, Burga ends up with a net favorability rating (measured as favorable opinion + unfavorable opinion) of negative 91 percent, almost unprecedentedly low for a public figure.

That makes him a candidate for the title of “World’s Most Hated Soccer Official,” at least within his own country.

It also makes Burga a strong contender for the title of “Most Hated Peruvian,” no mean feat in a country whose living citizens include a president who gifted them hyperinflation, and Abimael Guzman, the jailed leader of the Shining Path rebels, who unleashed a savage war in which 70,000 died. While Sepp Blatter, the suspended longtime head of FIFA, may be loathed in Europe and North America, even he still has some admirers. Much of Africa and Asia still laud his policy of pushing pro soccer into new markets; in Latin America, opinion is mixed.

“Burga had the chance to clean up Peruvian football and he didn’t do it,” said Jose Alejandro Godoy, a columnist with Peruvian paper Exitosa. “Peruvian football has never been in as bad shape. But he has also been a lightning rod for the fans’ frustration. Whole generations of fans have never seen their country at the World Cup.”

Over the years, Burga has defended himself by claiming he should be judged for his administrative work rather than results on the field.

He’s also crossed swords with more than one Peruvian soccer great. Last year he responded to criticism from Juan Carlos Oblitas, one of the brightest stars of the 1982 team, by accusing the former player of laziness.

According to local media reports, Burga was fingered for allegedly taking a $1.5 million bribe in a deal over the 2015-2027 TV rights to the Copa America, Latin America’s premier tournament for national teams. He is also alleged to have received an annual $1 million kickback for the rights to the Copa de Libertadores, the region’s top competition for club sides.

His arrest has also been seen within Peru as one more example of the country’s own failing criminal justice system.

“The national justice system has not done its job, despite the accusations and legal instruments at its disposal,” noted Peruvian paper La Republica, in an editorial. “That Mr. Burga, who has the right to the presumption of innocence, finds himself formally accused because the US, rather than Peruvian, justice system did its job, is a lesson.”

As cops led him away, Burga insisted: “I am totally serene. I have not received any crooked payment, any bribe.”

Now he awaits his fate in Lima’s Ancon II jail as the courts decide whether to approve the US extradition request.