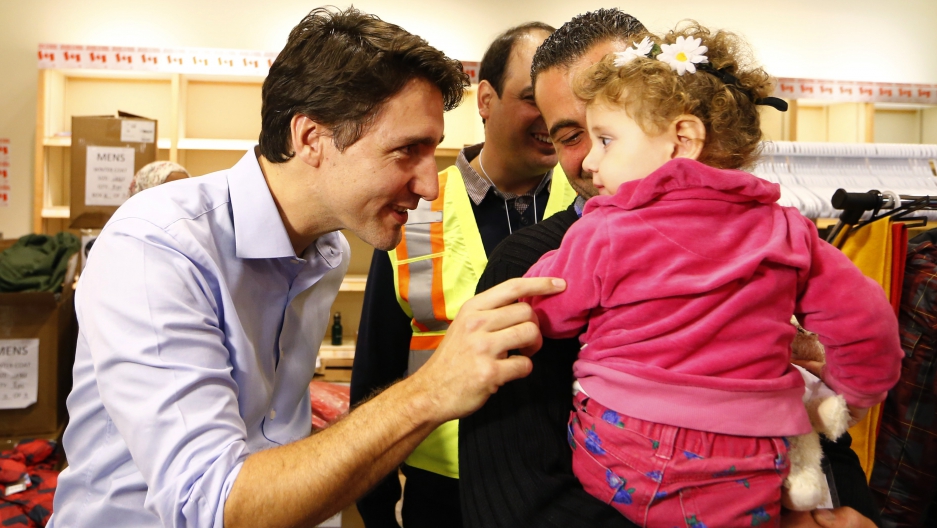 Canada welcomed 163 Syrian refugees late Thursday, taking in the first of a planned 25,000 in a matter of months and promising them a better life as they flee their country's horrific war.

Trudeau and several members of his Liberal government were on hand to greet the Syrians as they arrived on a troop transport plane in Toronto.

Dozens of volunteers, interpreters and immigration officials helped the Syrians through the formalities of admission and gave them blankets, snow boots and other welcome gifts.

Over the course of the day, good samaritans came to the airport to donate winter clothes and try to greet the Syrians who had set out from Beirut.

But in the end the tired travelers were admitted through a terminal that was closed to the public.

"Tonight they step off the plane as refugees. But they walk out of this terminal as permanent residents of Canada with social insurance numbers, with health cards and with an opportunity to become full Canadians," Trudeau said.

The government hopes to bring in 10,000 Syrian refugees and another 15,000 by the end of February.

"We will all remember this day," Trudeau said shortly before greeting the refugees, many of them women and children.

The new Liberal government, elected in October, had campaigned on a pledge to resettle 25,000 Syrians this year.

But it backpedaled last month, citing logistical issues and following criticism that Ottawa had been moving too fast despite security concerns heightened by the terror attacks in Paris last month.

Broadcaster CBC reported in November that Canada will accept only whole families, lone women or children from Syria, while unaccompanied men — considered a security risk — will be turned away.

Another plane carrying around 160 Syrians is due to arrive in Montreal on Saturday, and the pace of arrivals is scheduled to increase to as many as two planes per day.

The ones who arrived Thursday night were to stay in hotels before joining relatives or Canadian families who have offered to open up their homes to them.

The generosity being shown by Canadians stands in contrast to the colder approach of the United States toward the refugees.

President Barack Obama has pledged to take in 10,000 Syrians over the course of the next year, and many American states -- apparently fearing Islamist extremists will be hiding amid the refugee flow -- have said they do not want them.