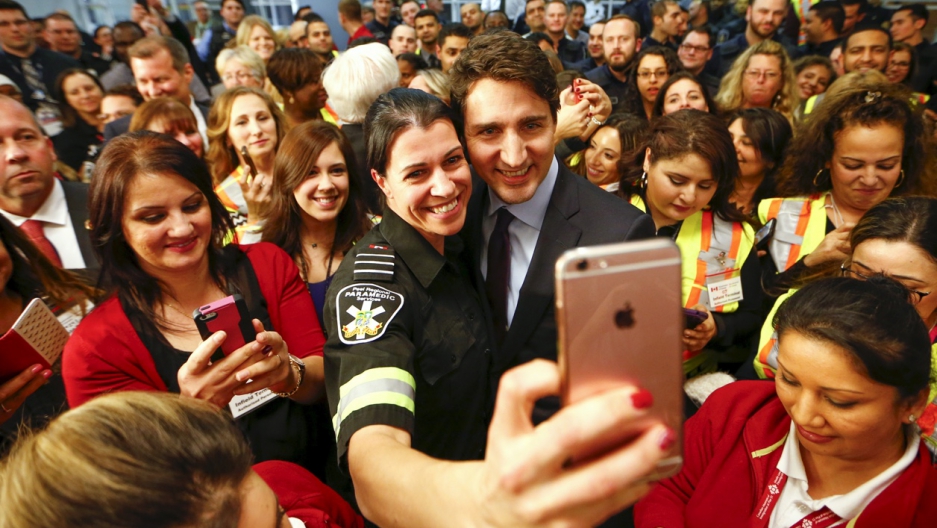 Canadian Prime Minister Justin Trudeau poses with airport staff as they wait for Syrian refugees to arrive at the Toronto Pearson International Airport in Mississauga, Ontario, on Dec. 10, 2015.
Share

While so much of the world navigates xenophobic debates about how to manage the global refugee crisis, Canada is trying something else: cheerfully welcoming them.

The first planeload of refugees from Syria arrived in Toronto on Thursday. They came aboard a Canadian military transport plane and were welcomed personally at the airport by the new Canadian prime minister, Justin Trudeau.

There were 163 Syrians on the first flight. Trudeau has promised to resettle up to 25,000 by the end of February. The first arrivals must be wondering if the prime minister intends to personally welcome every single one of them.

"This is a wonderful night, where we get to show not just a planeload of new Canadians what Canada is all about, we get to show the world how to open our hearts and welcome in people who are fleeing extraordinarily difficult situations," Trudeau told airport workers and volunteers standing by to meet the refugees.

Many Canadians are also personally sponsoring Syrian refugees, separately from the government resettlement plan. Many of those sponsors were showing up at Toronto airport’s main terminal to welcome them as they arrived on commercial flights.

"I'm here to show my solidarity for and support of the Syrian people going through genocide in Syria,” one of the sponsors said. The whole scene stood in stark contrast to the neighboring United States, where the resettlement of a tiny fraction of Syrian refugees is a major controversy. Politicians have actually called for a complete halt of any resettlement after the Paris attacks.

Gun violence is out of control in Brazil. The country has 19 of the world’s most dangerous cities. There were more than 42,000 gun-related killings in 2012, the highest toll from shootings in Brazil's history. The vast majority were homicides.

And so — and this may or may not seem logical to you — the idea to curb the violence in Brazil is to introduce a lot more guns into the population. The theory is that if regular people had access to more guns, they’d be able to defend themselves from criminals. It's a familiar enough argument in the United States that it makes one wonder if there are Americans advising these lawmakers in Brazil.

A group of conservative lawmakers wants to allow Brazilians to buy up to nine guns a year. Their bill would also lower the age at which a gun can be bought from 25 to 21, and extend permits from three to 10 years, writes GlobalPost Senior Correspondent Will Carless, who is based in Brazil.

Carless interviewed residents of Rio de Janeiro’s largest poor “favela” neighborhood, called Rocinha, to find out what they thought of the plan. There is gun violence in Rocinha, but not one person Carless spoke to thought a more relaxed gun law was a good idea.

For one, they didn’t think your average person could be trusted to use a gun safely. “People will have their guns and they’ll just say, ‘There’s a black guy, he’s gonna try and rob me’ and they’ll shoot at us,” one resident said.

Yesterday was apparently Human Rights Day. If you missed it, that’s okay. You are allowed to care about human rights all the time. In honor of the day, here is a reminder of how wide the gender gap remains around the world:

The World Economic Forum said in a recent report that at the current pace, it will probably take another 118 years before women all over the world enjoy the same job compensation men do. So, mark 2133 on your calendar?

The forum ranked the world’s countries by their level of wage equality between men and women. It found that Rwanda has some of the fairest wages around. What’s interesting is that Rwanda is also one of a handful of countries on the planet that has more women in the workforce than men, and lots of female politicians.

The United States, if you were wondering, placed a very distant and disappointing 74th for wage equality.