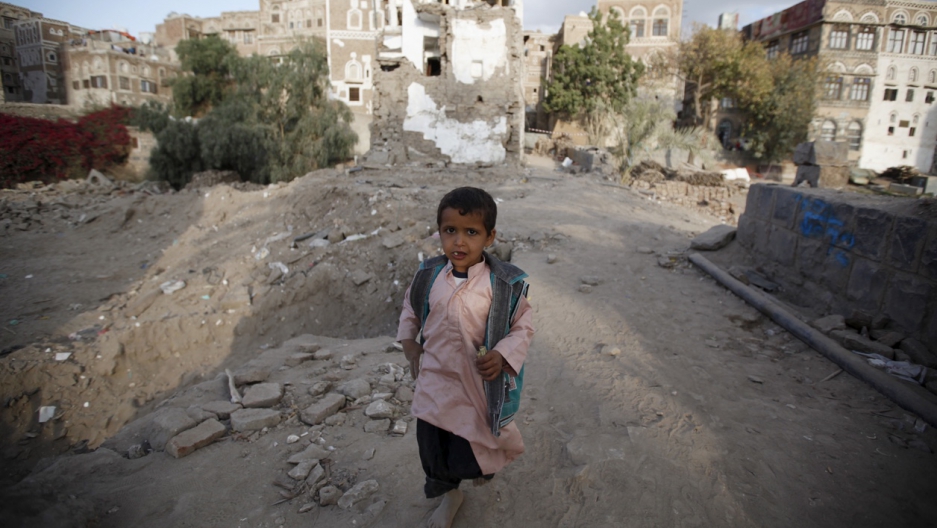 A boy walks past houses damaged in the current conflict in the old quarter of Yemen's capital Sanaa Nov. 27, 2015.
Share

It looks like the US Congress will approve the sale this week of almost $1.3 billion in weapons to Saudi Arabia. The package will include some 13,000 smart bombs, most of which will probably end up falling on Yemen.

With American help, a coalition of Arab countries led by Saudi Arabia is obliterating Yemen. They’ve been doing so for going on eight months now, and there is no end in sight. The air assault against the Houthi rebel group has killed thousands of civilians and destroyed hospitals, schools and other civilian infrastructure.

Some of the attacks appear to constitute war crimes. And since the United States is providing both weapons and logistical support to the Saudis, that means the Americans could be complicit in those crimes too.

More than 2,500 civilians — 637 of them children — have been killed so far, according to the United Nations. The UN expects the actual toll to be even higher because many of the dead or injured never reach medical facilities, and so go unrecorded.

Saudi Arabia says this new arms deal will fix all that because it will allow it to better target rebel positions in Yemen, and prevent civilian casualties. Not everyone is so convinced of that.

UN climate change conferences are somehow both apocalyptic and tedious affairs. Leaders from almost every country in the world gather in a large hall and debate how the planet can be saved by this impending calamity. There are backroom dealings and heated arguments over word choice. There’s a media storm. All the while protests and product stunts are going on outside, with lots of photo ops. It’s total craziness.

It’s really hard to get the whole world to agree on anything. But at the Paris version of the climate talks, which have been going on for more than a week, a draft agreement is actually now on the table, which means decisions are being made.

To give you an idea of how complicated this gets, here’s a line from an earlier draft:

The difference between words like “communicate” and “submit” or “formulate” and “prepare” are significant to some leaders. Basically, everyone is trying to collectively commit to specific levels of greenhouse gas reductions, while maintaining the most flexibility they can on those reductions.

In the end, the conference might actually result in an agreement. But it will probably be a much weaker agreement than the world’s climate scientists are all hoping for.

India is an insanely diverse place, culturally, linguistically and religiously. So there have always been some tensions. But since a Hindu nationalist party took over 18 months ago, minorities say they feel unwelcome.

Celebrities, writers, filmmakers and others have all spoken out against what they say is rising intolerance in India. Opposition lawmakers are calling for a debate on the issue as well. But despite all the brouhaha, there is one person who hasn’t weighed in at all: Prime Minister Narendra Modi. Many consider his silence complicity.

Modi’s supporters reject this accusation. They just won’t tolerate it. Their responses have been amazing, and disturbing. You can read some of the best ones here.