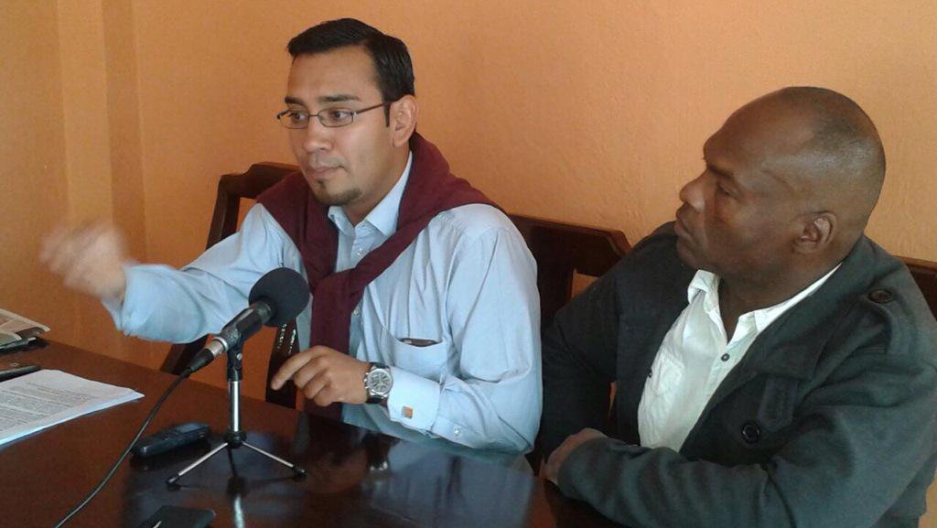 His tweets landed him in jail. Ecuadorean political leader Sebastian Cevallos at a press conference, pre-incarceration.

And in Ecuador, tweets can lead to jail. Particularly when you claim that the labor minister has 20 relatives on the public payroll.

A leftist political leader has found that out the hard way.

Among the tweets sent in recent months by Unidad Popular deputy leader Sebastian Cevallos: that one of the minister's daughters is a paid adviser to him — and another runs a public company handling hydroelectric projects.

After the information was made public, Paula Rodas, an official of the National Institute of Cultural Heritage (and niece of Carrasco), filed a lawsuit, challenging what Cevallos said. The filing read:

…through his use of twitter, Mr Rodrigo Sebastian Cevallos Vivar has uttered words of clear disrepute and shame in saying that by being the niece of Carlos Marx Carrasco the person in question has employment in the public sector.
[…]
…since the 21 of July, 2008, owing to the her tireless efforts and achievements, Paula Francisca Rodas Espinoza has held a permanent position in the public sector.

According to the newspaper El Universo, Rodas cited a law that says “a penalty of 15 to 30 days jail will be imposed … for any person who, through any platform, makes defamatory remarks against another person.” Last month, a judge sentenced Cevallos to 15 days behind bars.

The non-governmental organisation Fundamedios, which defends the freedom of speech of journalists and social media users, such as Cevallos, that are accused of corruption or are censored in the mass media, released a statement confirming the sentence. Fundamedios has also been threatened with closure by the Ecuadorian government in the past.

Fundamedios released a statement confirming the sentence. According to Cevallos: “It's ridiculous that they are bringing up this article from the constitution, as it is in the name of freedom and freedom of expression they are sentencing me.” Article 66 protects the rights to both freedom of expression and opinion. The statement continues, describing the three tweets of interest to authorities:

The trial, which began on the 19 of October, when Cevallos received the notification, was resolved quickly. The claim of Rodas Espinosa, the official, stated that on the 21, 22 and 23 of July this year, Cevallos, known on the social network as @sebasticevallos, “uttered words of blatant defamation” against her, over three Twitter message that according to the official were “completely false, hurtful and carried a deep intent to cause harm.”

There were three tweets that the official referred to. In the first tweet, Cevallos calls for a press conference to reveal, according to him, “acts of corruption by a high ranking official from Alianza
Pais.” In the second tweet, Cevallos asked his followers if they knew who the president of the ruling party's ethics commission was, with a mention of the Minister. The third, alludes directly to the
plaintiff with the following message: “Paula Rodas, niece of @CarlosMarxC is in INPC- regional 6. He (Carlos Marx) is effectively the Labor Minister for his family.

After the verdict, Sebastian wrote on his Twitter account that he does not fear the injustices of this country, and that he will appeal the sentence.

Thousands of Cevallos’ followers have shown their support with the Twitter hashtag #TuitearNoEsDelito [#Tweetingisnotacrime], as he is the first Ecuadorean to receive jail time for using social media to report nepotism in the government.

The Twitter account of Frente Popular Azuay (@FrentePopularA), the opposition movement lead by Sebastian Cevallos, wrote that this case should not involve the law.

Caty Sarmiento P. (@caty_sp_20) stated that free speech must not be stopped.

Cesar Zea (@Cesar1983Z) tweeted in support of his friend.

A group of experts from the United Nations and the Inter-American Commission on Human Rights have argued that some of the current legislation in Ecuador violates freedom of speech and freedom of association in the country.

This story was cross-posted by Global Voices, a network of hundreds of bloggers worldwide.