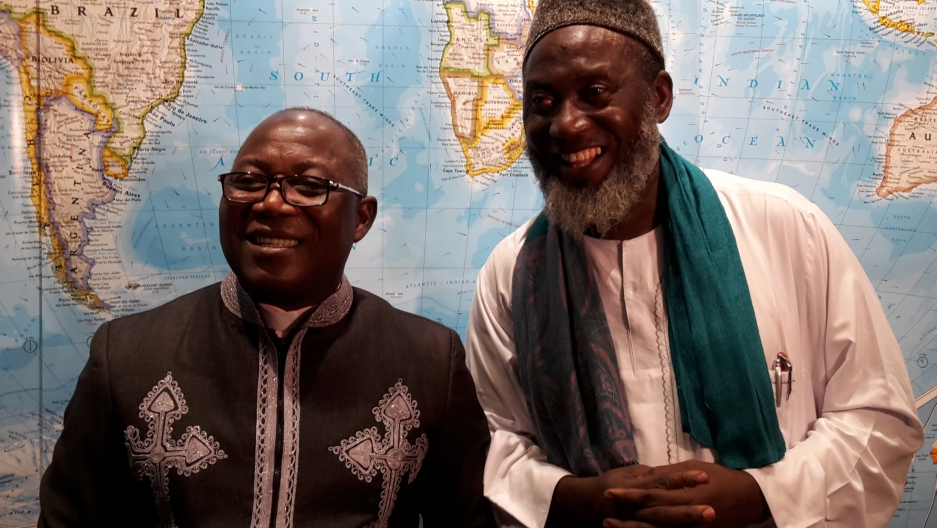 In decades past, Nigerian Imam Muhammad Ashafa and Pastor James Wuye were leaders of militias that battled one another.

The Christian-Muslim disconnect is deeply personal for a Nigerian imam and pastor.

Two decades ago, they were foes who led rival militias. Their followers battled in Kaduna, a Nigerian city quivering on a fault line between Christianity and Islam. Today the two men are allies. And they're offering Americans strategies to combat religious prejudice and hate.

"Over the years, we were programmed to hate one another by our so-called religious leaders and politicians who have told us that the other is our enemy," says Pastor James Movel Wuye. "A journalist ... brought us together and said 'Pastor, imam, talk.'"

That was in 1995. Now Wuye jointly directs Kaduna's Interfaith Mediation Centre with Imam Muhammad Nurayn Ashafa.  And Ashafa has a message for his US counterparts.

"First and foremost, I feel this is a time for American Muslims to wake up and explain what Islam really is," he says. "It's time for religion leaders around the world to raise up their voices and say 'No! That is not us and that cannot be us!"

Still, the two men's efforts haven't entirely eased tensions in Kaduna. The city's Muslims primarily live north of Kaduna's main river. Most of its Christians live on the river's opposite shore.

"Initally it wasn't so," Ashafa says. "It was out of fear and a phobia of one another that led us to move."

But Ashafa says he looked to his scriptures for guidance and reconciled with his Christian neighbors.

Wuye encourages American Christians and Muslims to listen to one another. A turning point for him was being invited to address several thousand Nigerian imams a few years ago. He seized the opportunity. "This operation gave me the platform to explain my faith to them, and they understood my position," he recalls.

He thinks the same sort of inter-faith dialogue is lacking in the US.

"American Muslims need to come out and collaborate with American people, those who are in fear, to allay their fears," he says.

"It's time for the imams in America to move faith into action," he says. "Time for house-to-house, town hall meetings with their communities, and inter-faith engagement with other non-Muslim communities."