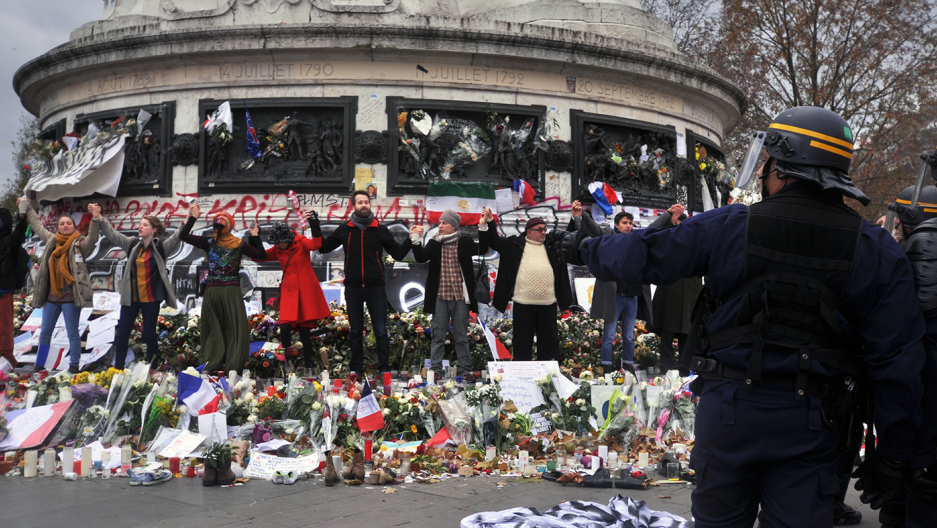 Demonstrations in and around Place de la République in Paris on the day before the COP21 climate talks opened.

For two weeks, diplomats have been drafting a deal on climate change at the United Nations talks in Paris. Most of the world leaders have already left town, after some stirring speeches that set high hopes for an international agreement expected later this month.

And while environmentalists share that sense of urgency, some are skeptical of the process itself.

There're a lot of “green” groups in Paris right now, but they come in many sizes. You could say there’s “big green” — the environmentalist establishment — and “little green,” or the more radical outsiders.

Shyla Raghav is definitely big green. She’s director of climate policy for Conservation International, and this isn’t her first rodeo.

“I’ve been coming to these COPs for over a decade,” she says, referring to the official U.N. title for the climate talks on the outskirts of Paris. “COP13 in Bali was my first, and that was in 2007.”

Not much has gotten done at these conferences since then. But this time around, Raghav says, the atmosphere is remarkably different. “I think there is an inspiring sense of optimism around the COP,” she says, “not only from civil society but also from government delegates.”

But Raghav is inside the conference. Too inside, perhaps, if you’re a “small” green like Bobby Righi, a 78-year-old who came here from Seattle to join street demonstrations for climate action. She doesn’t expect the negotiations will do much to fix the climate crisis.

“I’m a little too cynical about that.”

Others activists here are beyond cynical. David Garcia, a 28-year-old from Spain, says he’s completely disconnected from the negotiations. People want revolution, he says — not empty promises.

“Honestly I don’t try to make my voice heard by the political leaders that are here,” he says. “They’re traitors to the interest of the people. They have created a massive financial crisis, a massive economic crisis and a massive climate crisis. And for the last 25 years they haven’t given any response.”

Back in the converted airport hangar housing the climate talks, those concerns aren't falling on deaf ears.

“There’s no question that we will not be able to address the challenge of climate change within the current capitalist system,” says Kumi Naidoo, the executive director of Greenpeace International. “However, what does that mean in practical terms?”

Naidoo is from South Africa, and he sort of straddles the divide between big and small green. He says it’s critical that the negotiators strike a deal on climate change in Paris.

And while he hasn’t lost faith in the UN process, he does have his reservations. For instance, negotiators are squabbling over how to keep the global average temperature from rising past the critical 2 degrees Celsius threshold by 2100. But Greenpeace believes even 2 degrees is too much. And Naidoo says rich countries aren’t doing enough to help the developing world deal with climate impacts that they had little role in creating.

“So for all of those reasons, I think people must be careful that they don’t drink the Kool-Aid and get carried away with broad, general statements of urgency that governments are making. Because we know they are playing to constituencies back home,” Naidoo says.

Even many representatives of big green here at the climate talks believe that what happens outside the conference halls — the voices and actions of little green — is at least as important as any international agreement.

Steve Herz of the Sierra Club — among the biggest of big green — says activists play a bigger role than any diplomat.

“Look, at the end of the day, the primary driver is going to be citizens holding their governments to account. So we need these kind of grassroots movements. We need people in the streets, we need people voting on climate change records of politicians, we need investigative journalists holding politicians and companies to account,” Herz says. “That kind of grassroots pressure, the bottom-up pressure. ... It’s absolutely essential.”

These talks aren’t going to solve climate change by themselves. So, Herz says: curb your enthusiasm, sure — but don’t give up hope.

This story is part of a series called "Climate of Hope" produced by a team of reporting fellows for The GroundTruth Project with support from the JMB Charitable Fund.

Update: The audio version of this story says that Kumi Naidoo of Greenpeace is from Nigeria. It should say that he’s from South Africa.