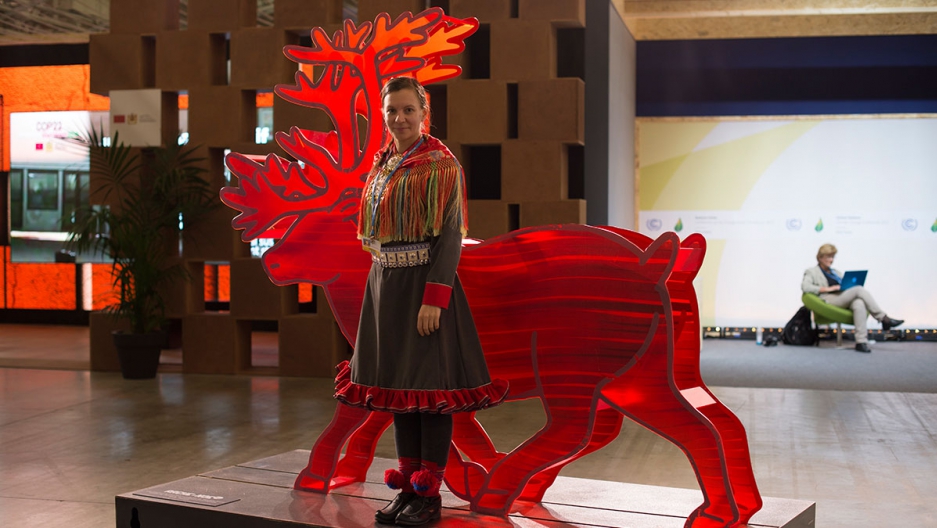 Aile Javo stands in front of a plastic reindeer at COP21.

Nearly 200 countries have official delegations at the UN climate negotiations this week in Paris. As they race to finalize an agreement by Friday, getting everyone to agree on a final document will be a Herculean task. But for every national diplomat with a seat at the negotiations, there are many more perspectives that aren’t directly represented in the talks.

Special interest groups, from farmers to youth, all vie for attention at and around the Le Bourget negotiation site just north of Paris, trying in indirect ways to influence the outcomes of the talks.

For Aile Javo, that means wearing her traditional Sami dress to stand out in a sea of dark business suits. The dress she donned Tuesday had a full skirt, red trim, a bright red shawl and big silver broaches that jingled as she rushed around the conference corridors.

“It’s to show everyone that I’m indigenous,” Javo said. “You know, the Sami people, we have light hair, blue eyes, some of us, it’s not very easy to see that we are indigenous if we are not wearing our traditional dress.”

“They are not, we are very disappointed of them right now,” Javo said.

Javo’s main objective in Paris is for the final agreement to include protections for respecting human and indigenous rights as countries fight climate change. It’s looking unlikely that we will make it into the main body of the text.

“We’re still hoping that some countries will manage to keep it in the final agreement, but it’s been very difficult,” Javo said.

Javo is one of thousands of official “observers” in Paris from recognized civil society groups including NGOs, women and youth groups, indigenous people and business representatives.

These observers are allowed inside the secured UN conference center but not the high-level negotiations between top delegates. So their tools of persuasion are to make themselves as visible as possible and try to meet with official delegations.

“We have had meetings with all the Nordic governments, with the EU, with Canada,” Javo said. “We’re trying to explain to them why this is so important for us.”

Negotiators pulled an all-nighter Wednesday and tension at the Le Bourget site north of Paris is mounting as the Friday agreement deadline looms. As chaotic as these meetings are, they would be even more chaotic if every interested party actually got a seat at the negotiating table.

But another Sami observer, Jan Saijets, pointed out that this system of lobbying also has its flaws.

“There are so many events happening at the same time, and nobody seems to know who is attending what meeting at the moment, so nobody knows who to try to lobby,” Saijets said. “So that is really a challenge.”

Saijets is from a reindeer-herding family in northern Finland and, like Javo, he has one main objective at the conference.

“The most important thing for me is to keep the winters as cold as possible,” Saijets said. “The Sami livelihoods like reindeer herding and the river fishing, they are totally dependent on the climate that we have. We already see effects.” 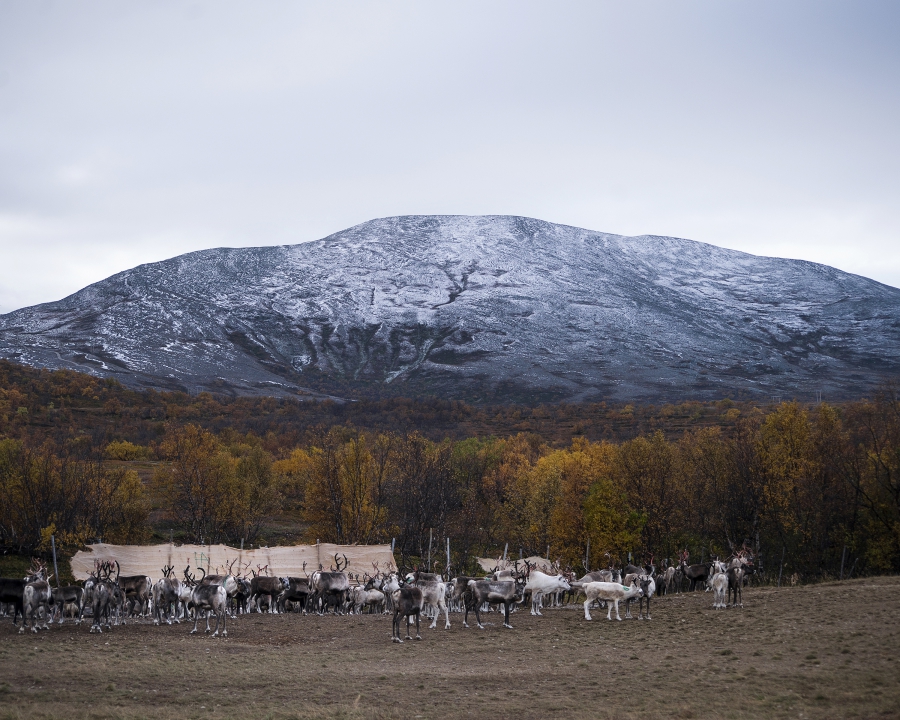 A herd of reindeers tended by the Sami takes a rest under a mountain in Finnmark, northern Norway.

Saijets said changing precipitation patterns mean lichen that reindeer like to eat are increasingly getting trapped under ice that forms from freezing rain.

“So they cannot dig the ground, and in wintertime there has been more snow than normal, and that has made it again impossible, or very tiresome, to get the ground lichen,” Saijets said.

A warming climate can actually mean more snow in some places. So to keep reindeer herding viable in the future, Saijets wants the climate agreement to limit global warming to 1.5 degrees Celsius above pre-industrial levels. That target is in play in the final days but negotiators may still settle on a softer 2-degree target, the original stated goal of the Paris talks.

Aside from making themselves seen between sessions and lobbying delegates in side meetings, observer groups like the Samis are hosting a slew of side events at a civil society space near the official negotiations.

On Tuesday, a film by Sami director Silja Somby was screened as part of a short film festival. A traditional Sami singing workshop competed for audience members right next door.

“Our hope is only that we will raise some awareness that … this culture is actually so close to the land, that we will all be impacted by climate change,” Somby said.

And so the Sami and thousands of other unofficial voices here struggle to make themselves heard above the din.

“Maybe then the world will wake up before it’s too late.”

Camilla Andersen, who contributed photography to this piece, is a reporting fellow with The GroundTruth Project