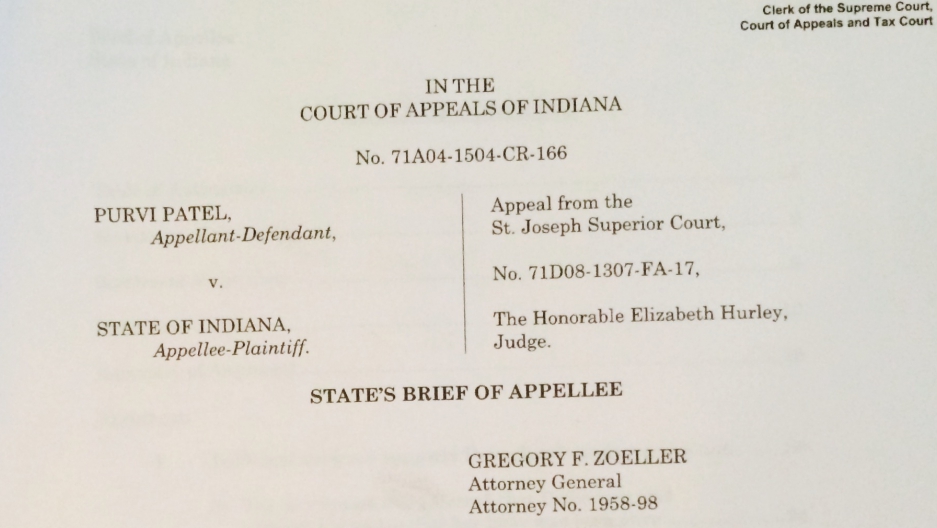 The state's response to Purvi Patel's appeal of her conviction for feticide and child neglect.

Thirty-five-year-old Purvi Patel, the daughter of Indian immigrants, has now served eight months of a 46-year sentence at the Indiana Women’s Prison. In October, Patel lodged an appeal of that conviction with the state’s Court of Appeals, and now Indiana’s attorney general has responded. It's not clear when the appeals court will issue a ruling on her appeal.

Patel’s case has gotten international attention as well as support from reproductive rights groups who worry her conviction of feticide sets a precedent that enables more convictions of women for outcomes of their own pregnancies.

Both Patel’s appeal and the state’s response center on the night of July 13, 2013, when Patel appeared, bleeding, in the emergency room of St. Joseph’s Regional Medical Center near South Bend, where she lived.

At first, Patel did not tell doctors that she had been pregnant. But Patel still had a placenta inside her womb, attached to a severed umbilical cord. She later told doctors she had lost the pregnancy at home and left the fetal remains in a dumpster. This led to a police search, aided by one of the doctors who treated Patel. They found the remains, and police questioned Patel in the hospital after she emerged from an operation to remove the placenta.

Patel is represented pro-bono by Stanford Law professor Lawrence Marshall and Indiana University law professor Joel Schumm, who argue there was little Patel could have done under the circumstances to save an extremely premature infant.

As for the feticide charge, their appeal argues that it was improperly applied to cover abortion, and that the conviction also violates Patel's constitutional rights.

In its brief, Indiana Attorney General’s office argues both of Patel's convictions are based on sufficient evidence.

“The state was not required to prove that an attempt to obtain medical care would have saved the baby’s life, only that Defendant placed her baby in appreciable danger by not obtaining medical care for him,” the response states. “The jury reasonably inferred that Defendant was subjectively aware that her baby was born alive...The baby was born at 8:11pm on July 13, one of the longest days of the year, meaning that there was still plentiful light present at that time.”

The state argues Patel likely knew she was further along than 10-12 weeks and should have anticipated a live birth for several reasons, citing Patel’s phone texts to a friend as well as her “disengaged and unemotional attitude at the hospital.”

Patel’s attorneys argue that her convictions for both child neglect and feticide are legally contradictory, but “a conviction for feticide does not require proof that the fetus died in utero,” the state has responded.  Furthermore, while other states may offer legal protections against feticide charges for pregnant women, there is no implied protection in Indiana, “in keeping with Indiana’s well-established interest in protecting unborn human life,” the response states.

Patel’s attorneys will have one last chance to respond to the state’s arguments. The Indiana Court of Appeals has not yet announced when it will make a ruling on Patel’s appeal.

Under her conviction, Patel must serve a minimum of 20 years in prison.